Hey guys, Drew back here! Yesterday, I finally got back from one of the best third basemen of all time in a through the mail I sent way back on March 4th. I was notified by William of a signing he was doing in which you could mail in items for $30 minimum (depending on what you requested to be signed) and get an autograph back! So, I'm questioning whether to consider this a TTM or not, because it's very similar to what I did to get Joe Morgan to sign for me. Anyway, check this out! 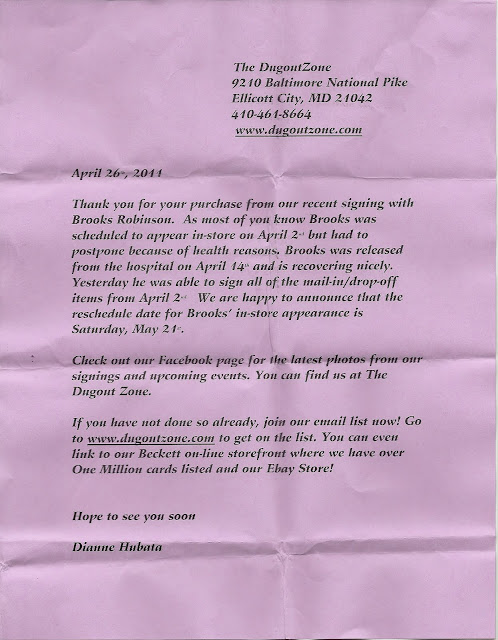 I was a little nervous of what was inside the envelope because it was really thick, but none the less it was just a letter thanking me for the purchase. If anyone is interested in trying out "The Dugout Zone" feel free to do so, because they're very good! 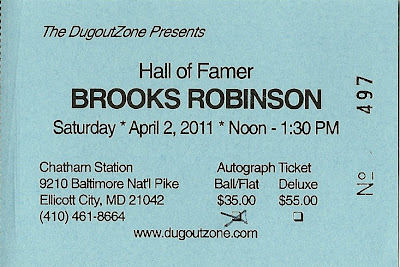 If you didn't notice by now, Brooks Robinson is the player that this envelope came back from! Brooks was recently having some health problems but fortunately he is ok for now and is back up and running. Above is my ticket for the autograph, I guess to perhaps use as a Certificate of Authenticity. 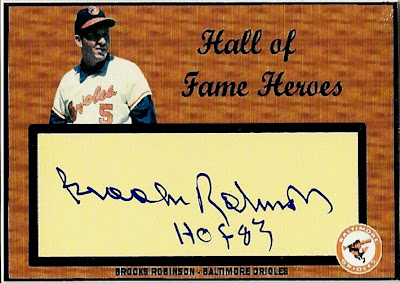 Now for what you've all been waiting for, this is the result! I was biting my nails for a while in hopes that the card wouldn't come back damaged, as I sent it right during the end of my damaged custom era, but instead, it was almost in perfect condition! What a miracle! It came back in a toploader and team bag, so The Dugout Zone did a fantastic job for me on this one! Not only did he sign it, but he also inscribed his Hall of Fame year, and the autograph looks outstanding! Brooks joins many other Hall of Fame legends in my "Hall of Fame Heroes" set collection, as one day I hope to reach many, many more of them for my collection!
Brooks was totally worth the $30 in my opinion. An 18 time All Star, 1964 AL MVP, and a 16 Time Gold Glover just gives him the numbers that only Mike Schmidt and possibly Alex Rodriguez could ever reach. He may be the greatest 3rd baseman of all time, and I'm so fortunate that he was well enough to sign the card for me.
Thanks a ton to The Dugout Zone and Brooks Robinson! And also a big thanks to William for letting me know of this signing! See Ya!
Posted by Drew at 9:41 PM