Revealing the Mysterious Binder... A Little At a Time... Hammerin Hank!

Hey everyone, Drew back here. I've gone through the thickest jungle, sailed the highest waves in the ocean, and climbed the biggest mountain in the world to return to you guys. Over the past week, I've taken a load of tests and quizzes, played a ton of baseball, and have battled a pulled muscle in my back along with a very bad cold. However, while I'm still sick, and I still have to take tests, still playing baseball, I've got a little time to spare to write for you guys.

The newest installment of the series highlighting my unbelievable binder belongs to the true All Time Home Run King, Mr. Hank Aaron! Check out what I was able to pick up of his! 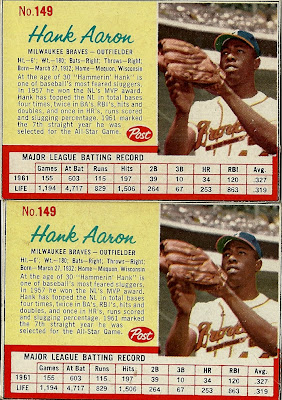 First were 2 cards from 1962 Post. Yes, the cereal brand. In the early 60's and scattered all around the later decades in the 20th century, Post was one of many oddball brand name companies to release cards. Obviously, cards used to come with gum, or even cigarettes or tobacco back in the early 1900's. These Post cards are hard to keep in good condition because it appears that they had to be cut out from a box of cereal for them to be free. While they don't have the value of early Topps cards from that time, the nostalgia is certainly there and I think they're pretty cool. 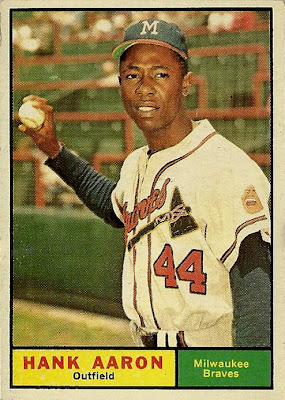 Next is one of the critical cards that I needed for my 1961 Topps set, Hank's base card! Of all the legends in the set, Hank Aaron is one of the top selling players, of course following Mantle, Maris, and even Clemente. It's a really nice card, based off of  a season in which he hit 40 home runs, which was just an average year for one of the best players in baseball history! 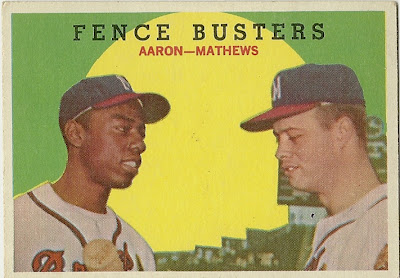 Finally, perhaps my favorite of the bunch is this 1959 Topps "Fence Busters" card of Aaron and fellow Hall of Fame slugger Eddie Mathews! Even in gem mint condition this card isn't worth as much as the 1961 card, but it is a gem to me. The photo isn't anything spectacular, but plain and simple, it is a card of 2 hitters who slugged a combined total of 1267 home runs, and 2 of the games greatest players.

I wish I could add an autograph of Hank to go along with these one day, and I know he'll be towards the top of my list. Stay tuned for the next segment of "Revealing the Mysterious Binder", and for now, I'm your host, Drew. See Ya!
Posted by Drew at 10:24 AM