TTM #60- A Quick Return from a Quick Player!

Hey guys, Drew back here. About a week ago I got a TTM return, and with the show and schoolwork, you know the drill, I never got around to posting it. Check out my newest success: 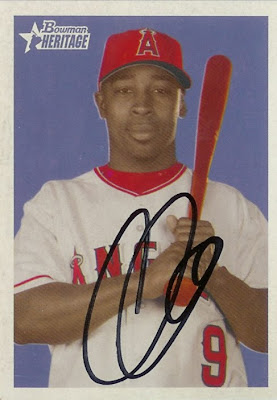 None other than former Angels and current Mariners speedster Chone Figgins! I've always liked Figgins, or at least respected him. When he was playing for the Angels, he was such a useful player, and he always took a good part in beating up the Yankees. Outside of maybe 1st base, catcher, and pitcher, Figgins can play well pretty much anywhere in the field, and when he gets on base, he cannot be stopped. With 322 steals in his now 10 seasons in the MLB, including a very nice 62 in 2005, he was/is one of the most lethal base running threats of the past decade.

Figgins has one ugly autograph, but I don't mind, as long as it's not damaged it could be the autograph we once voted "Worst Autograph" from Jason Jennings! The 1 Time All Star and World Series Champion signed this 2006 Bowman Heritage card for me in 36 days. I sent this card along with a custom of his, so I'm assuming he either liked the custom, or tossed it in the garbage since it was probably extremely damaged, resulting in me not finding it in my envelope. This is now the 8th success of the 30 letters I sent out this spring, giving me an approx. 27% success rate! Not too bad!