Quite a Few Pack Breaks!

Hey guys, Drew back here. As I left off on Wednesday, I still only have my mom's laptop and a busy schedule to work on. However, I have been able to open a few packs over the past couple weeks. Take a look at my results: 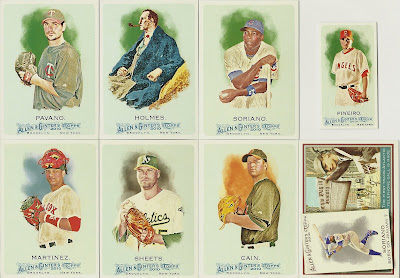 First was a pack of 2010 Allen & Ginter. There really wasn't anything special in here, minus the Joel Pineiro A&G back mini and the Soriano insert. I already have the whole set so now the packs are just for fun. 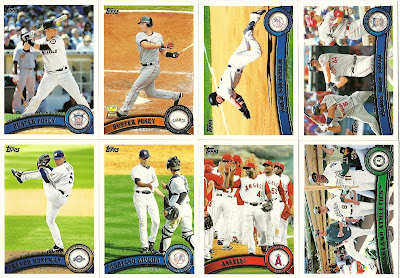 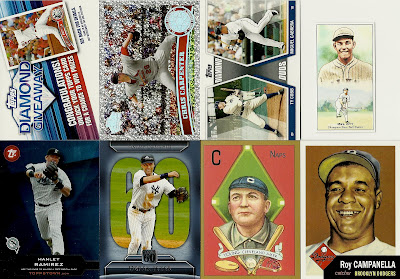 I also got a pack of 2011 Topps Jumbo from Dad! We didn't hit anything overly spectacular, but a Swisher base, Mariano Rivera base, and the Jeter insert made it a hit for me. I unlocked a load of garbage with my code card, but thats ok I guess. I did get a few cards for my 2011 Topps set so I'm happy. 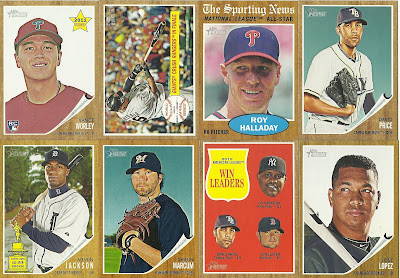 Finally, I opened about 4 packs of 2011 Topps Heritage! I really love the way these cards look this year, and I think I did fairly well with these. Sure, at about $5 a pack for some base cards and SP's may be a ripoff, but I think this is the most I've ever bought of a Heritage product. In Pack 1, I pulled a nice AL Win Leaders card starring CC Sabathia, David Price, and Jon Lester, as well as an SP of Roy Halladay. 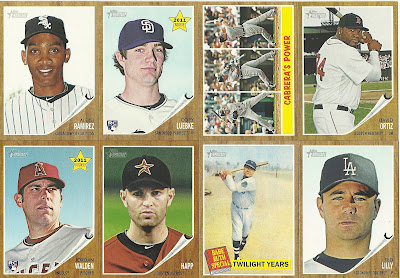 Pack 2 provided pretty much nothing special, outside of a Miguel Cabrera card displaying his power and a card of Babe Ruth during his Twilight years as a Dodgers coach. I already pulled this card so I was a little disappointed to see it again, especially with all of the other Ruth cards I could have pulled from this product. 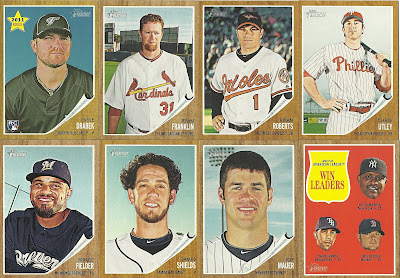 Pack 3 was perhaps the best, based on star power. You can never go wrong with pulling Chase Utley, Brian Roberts, Joe Mauer, and Prince Fielder base cards. Of course, I had to pull the AL Win Leaders card again, but I also got a rookie card of who may be the rookie of the year this year, Mr. Kyle Drabek of Toronto! I have him on my fantasy team and he's done nothing but good things so far in his few starts this season. 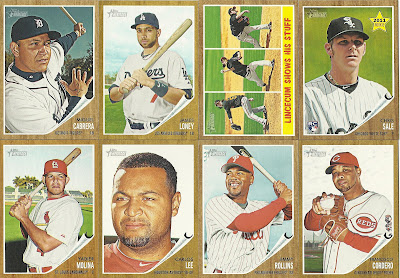 The last pack was pretty solid in my opinion, with base cards of Miguel Cabrera, Yadier Molina, and Jimmy "Red Hot" Rollins, who has started the season on fire for the Phillies! I also pulled a Lincecum card and a Chris Sale rookie card, so in my opinion I was pretty successful.
If you're curious in trading for any of the cards other than the Yankees, please leave me a comment and let me know. Thanks again Dad, and See Ya!
Posted by Drew at 7:50 PM