Hey guys, Drew back here, with my next TTM return. Over the last couple months, TTM-ing has probably been my most common subject in terms of posting, because I really do love that aspect of the hobby. I mean, who couldn't turn down autographs for typically just the price of postage? It's a very affordable and fun hobby, which is why I love it so much. Anyway, a few months ago, I wrote this former Yankee a letter asking for his autograph. Just weeks later, I got a RTS from the Postal Service, and almost gave up on trying him again. However, just last week I decided to try him one more time, and it sure paid off. 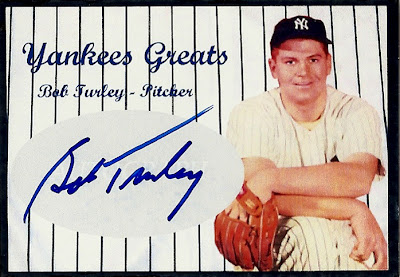 Former Yankees pitcher "Bullet" Bob Turley signed a custom for me! Turley was a great pitcher back in the 1950's and 1960's, during his 12 year career. Outside of the Yankees, Bullet Bob pitched for the Red Sox, Orioles, St. Louis Browns, and Angels. By far, his best season was in 1958 when he won the American League Cy Young award after posting a 21-7 record with a 2.97 ERA. He also won the World Series MVP that year when the Yankees won it all.
He signed the card in 7 days for me, and it looks very nice signed in blue sharpie. His signature has a very cool look to it and I'm happy that I was finally able to add him to my Yankees Greats autograph collection!
See Ya!
Posted by Drew at 8:41 PM