Hey guys, Drew back here with part 3 of the March card show series! In every card show so far, I've went out of my way to at LEAST buy 1 vintage card. However, after the addition of the mysterious binder, (which you still will have to wait to find out what hides inside of it), I decided to take a shot at the 1961 Topps set. Dad and I decided to do a little chipping away at the 587 card challenge awaiting my collection! 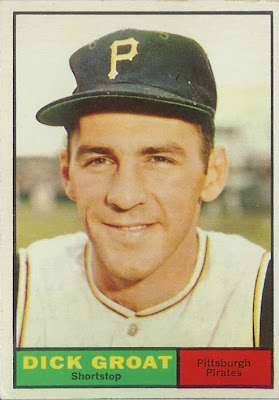 What a better way to start working on an enormous set by getting the first card! Dick Groat got the honors of first in the set, and he sure did deserve it! The season before, in 1960, Groat won the National League MVP and won the World Series! Talk about a season! Groat's got every reason to be smiling here, and in 1961 he hit .275 with 6 homers and 55 RBI. 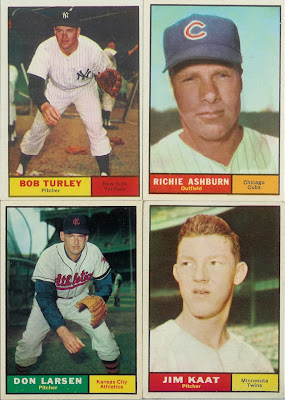 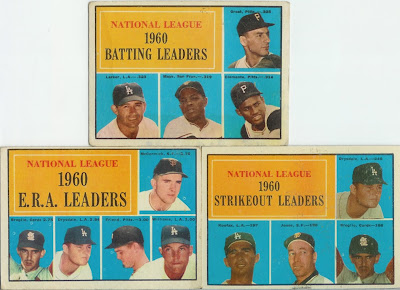 Next were a few League Leaders cards, all for the National League. While the two bottom cards have Don Drysdale and Sandy Koufax on them, the top card stands out by a lot. Dick Groat tops the group, but the 3rd and 4th place guys, maybe you've heard of them? Willie Mays and Roberto Clemente? I think I know those guys! 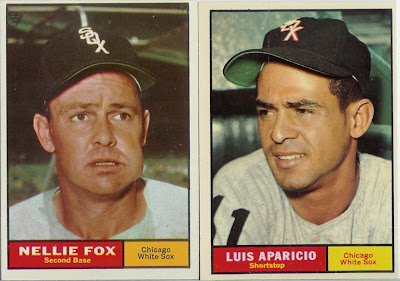 Next we have the former keystone combination from the Chicago White Sox, Hall of Famers Nellie Fox and Luis Aparicio. I never really knew much about these guys (I didn't even know that Fox was in the HOF), but I did some research on them and I can see why they're in. Fox, famous for his tobacco chewing, was the 1959 AL MVP, and he made 15 all star teams. Wow, can't believe I never knew much about him! Luis was also a 13 time All Star and 9 time gold glover, and he retired with great statistics. 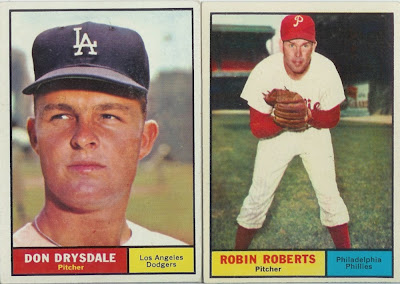 Also, we got some Hall of Fame pitchers to go along with the rest of the cards. Don Drysdale was an outstanding pitcher for the Dodgers, with a 209-166 record and a 2.95 ERA. He was often overshadowed by Sandy Koufax but he ended up winning the Cy Young the year after this card came out in 1962. Robin Roberts also was a very successful pitcher at the time, even though in 1961 his career was slowly on the decline. He made 7 All Star teams and ended up pitching with the Orioles, Cubs, and Astros before his retirement in 1966. He recently passed away early last year at the age of 83. 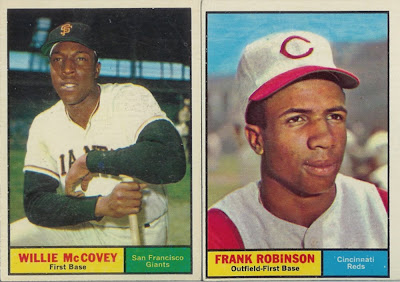 To go along with the other Hall of Famers, we picked up cards of two of the most dangerous hitters in the game at the time! Willie McCovey just started his career in 1959, so here in his 3rd year, he was warming up to eventually become a Hall of Fame slugger. Five hundred twenty one home runs later and the man has a plaque resting in Cooperstown. Frank Robinson was even better though, as he was an all around legend. Here right in the beginning of his prime, Frank is shown poised to continue his incredible success. When he joined the Orioles in 1966, he made an immediate impact, winning the Triple Crown! Not many players have that opportunity anymore, only done by Carl Yastrzemski after Robinson accomplished the feat. He retired with 586 home runs, 2,943 hits and a lifetime batting average of .294. 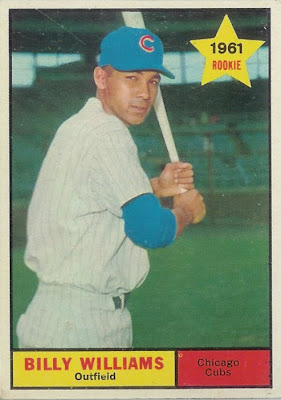 The final card we bought is definitely one of the/if not the best rookie card in the entire set. The set consists of rookie cards of Juan Marichal, Ron Santo, Carl Yastrzemski (although his real RC is in 1960 Topps), and a few other not as notable players, except for this guy. It's the 1961 Topps rookie card of Billy Williams! Billy, who was inducted into Cooperstown in 1987, was a great hitter. His career stats show off a .290 lifetime average, 420 home runs, and 2,711 hits, but the one part that is coolest about this card is that it shows a young Williams who was eager to succeed. And boy he did. In his first full season he hit .278 with 25 home runs and 86 RBI's, good enough to win him the 1961 National League Rookie of the Year!

I'm very happy to be able to add this big card to the set, and I can't wait to begin the chase! I'll have more details in a future post, but for now..