Hey guys, Drew back here. Yesterday was a great day for me, because I had gotten my first opportunity to play in a school game! The starting 1st baseman decided against running to first in anger after hitting an easy grounder, and coach wasn't a fan of that attitude, immediately calling me in to play at 1st base. As expected, I freaked out and had to grab everything in a matter of 5 seconds, due to all the excitement surrounding me. Finally. Well I made all of the right plays in the field, but then the big opportunity came up. My 1st at bat in high school baseball! I took the first pitch that bounced outside for a ball, but then got my pitch. It was a cold day, so I popped it up, but it managed to dunk into shallow right field for a single! I took second and third on wild pitches and scored when my friend Mike hit a grounder in the infield to score me. We ended up winning 7-0 and I'm so happy I got to play!

Anyway, I got a TTM a few days ago, check it out: 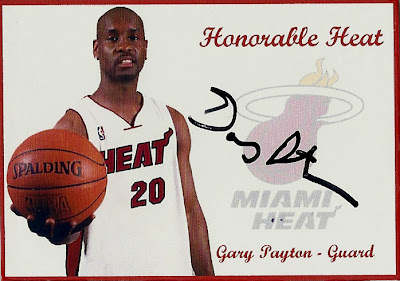 None other than "The Glove", former Seattle Supersonics, Bucks, Lakers, Celtics, and Heat point guard Gary Payton! Gary has been one of the more reliable signers in basketball of late, so I decided why not try to get an auto of his? The card came back signed in 9 days, signed nicely over the Miami Heat logo. I was a fan of the Heat before their mega stars joined together, back when the team consisted of Payton, Shaq, and Dwayne Wade. They won the championship in 2006 and haven't won since. Payton was the 1996 Defensive Player of the Year and a 9 time NBA All Star! He will most likely be elected into the Naismith Basketball Hall of Fame when his time comes to appear on the ballot, and I'm looking forward to his induction ceremony!