Hey guys, Drew back here. It's the beginning of a new MLB season, so that means I'm going to spend more time focusing on picking up autographs of the current stars and Yankees! I just bought this card for my collection the other day, and it came in yesterday: 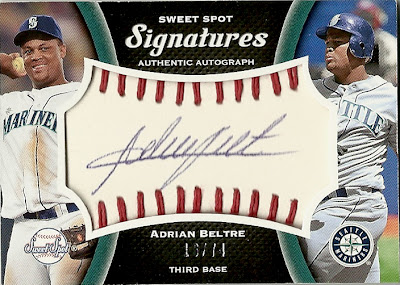 From 2008 UD Sweet Spot, it's an Adrian Beltre autographed card! Only numbered to 74, I was able to cheaply add an autograph of one of the top third basemen in the league. Fortunately, I was able to find this card of him during his short lived Mariners career rather than his Red Sox years that just recently ended. The Texas Rangers signed Beltre to a 6 year, $96 million dollar deal, most likely keeping him for the rest of his career. This year, after an awesome 2010 with Boston, he's started off hitting pretty well, a .254 average with 5 home runs and 16 runs batted in.

Overall, even if he's a former Sox player, I'm very happy to add another current star to my autograph collection. What do you think of the card?