Hey guys, Drew back here, after a long day of boredom at home. Here is the next part of the series.
Well, it was a great day of picking up cards and other stuff, but there was a whole other side to this story. The lines were huge, so I had to pass on former Dodgers Ed Roebuck & Ralph Branca, and former Mets manager Bobby Valentine, and so I met the freebie autograph guest, John "The Count" Montefusco, after I met Mattingly.

Let's start with Montefusco. I had to go pick up his rookie card at a vendor so I could get it signed, since we had 2 tickets and 1 card. So, I got that for I think 50 cents, and off we went. They did the Mattingly session by number called, in order. Yeah, we were #145. Ugh. So, we went in line to meet Montefusco, and it was a really long wait. We got called to meet Mattingly when we became close to the front of the line, and so we hopped over to meet him. But after we got back from meeting Mattingly, it was almost our turn to meet Montefusco. Actually, if Mattingly hadn't left right after we met him and Montefusco had to run out and get his autograph before he left our plan may have never worked out. But it did, and he was a really nice guy and looked pretty young, although he is 59, he looked in his early 50's. He never was too successful in the majors but did finish his career with a 90-83 record and a career 3.54 ERA. He made the all star team in his 1976 rookie season, and he also was named rookie of the year. He threw a no hitter that year and had a great rookie season. It went downhill after that unfortunately. He inscribed the cards I gave him to sign "The Count" and I was happy to meet him. Here are the cards and me with him: 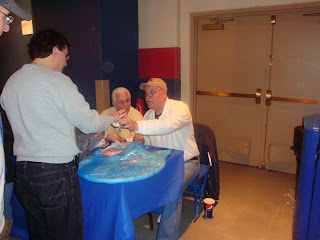 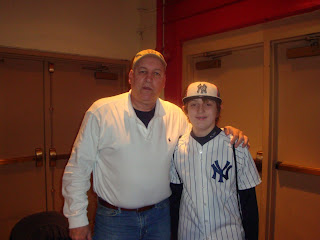 Me with The Count 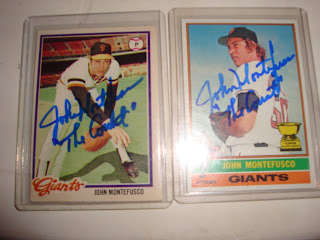 Next up, was the reason I preferred going the Saturday instead of meeting the entire Yankees infield from the 1977 World Series on Sunday, meeting former Yankee Captain, 6 time All Star, 9 Time Gold Glover, 3 Time Silver Slugger, and 1985 AL MVP Don Mattingly! As I mentioned in the Montefusco paragraph we had to get out of line for him and go to the Mattingly line when nobody was there and he was about to leave. Since we practically were first in line, we rushed to get everything ready, and all turned out well except for the picture of me and him, which is blurry. He signed the 8x10 picture we bought of him and it looks nice with my other signed pictures (Roy White, Chris Chambliss, Cecil Fielder, Brian Bruney, and Yogi Berra). We asked him if he remembered a story in an elevator involving my uncle and him. There were in a hotel, same elevator at one time, and my uncle thought he was Ron Guidry. He said to Mattingly "Hey, Louisiana Lightning!". Of course, it wasn't Guidry. Mattingly didn't remember it, but he said many funny things like that have happened to him in his career that they are all a blur. He laughed at the story though. It was great meeting him and getting his second autograph. I already have his trifecta after that crazy pull in my box of Donruss Threads, but it's nice to actually meet him. Here are the pictures of the autograph and other stuff from the quick meet with a former Captain: 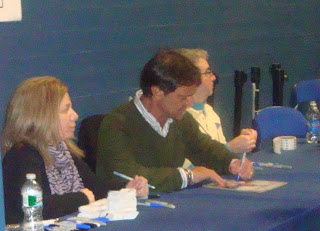 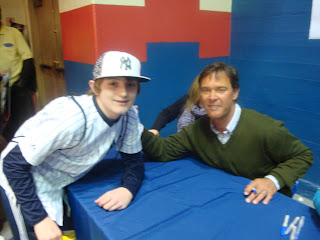 Me with Donnie Baseball 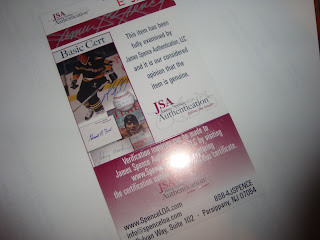 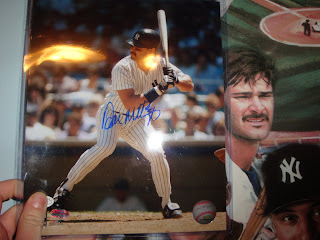 I hope you enjoyed that story, and See Ya!
Posted by Drew at 7:38 PM