Hey guys, Drew back here, after a very long break. Sorry bout that. We had a virus on the computer, and I wasn't able to get on for a few days. Thankfully it's gone, and as I am wiping out random pictures and videos on the PC that I don't need, I figured it was time to post part 3, the random base and numbered Yanks inserts picked up while at the show. I spent some money on this stuff as it was pretty critical for me to get. Here we go: 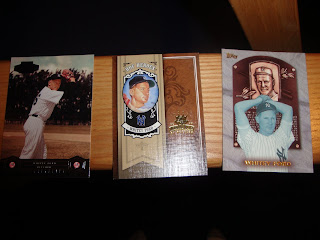 3 Whitey Fords
Gotta start off with an all time great, no doubt the best left handed pitcher for the Yanks all time. I'm too lazy to post the sets they're from, I know the middle one is from 2005 Diamond Kings but I forgot the rest. The picture on the left card is the same picture as the one I will be soon sending out to Mr. Ford through the mail. All 3 of these cards would look great signed but I wanna do the picture instead. I picked each of these up for I think a quarter each. Not bad! 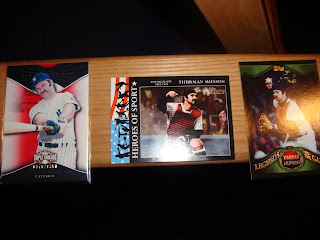 3 Thurman Munsons
Sweet! I got the cheapest Triple Threads base card they had, it's numbered out of 1350 and I think I got it for 4 bucks. It's a really nice card and my first of any year Triple Threads base cards. The next one is from 2009 Topps American Heritage and is part of the Heroes of Sport inserts. The picture and design is great and I got it along with the next one in a deal, don't remember how much. The last one is a 2009 Topps Legends of the Game insert, and very well could be my favorite of the 3. It's got an excellent picture of a former Yankee great, my dad's all time favorite baseball player not to mention. These 3 cards were must haves when I saw them and they look great in the collection! 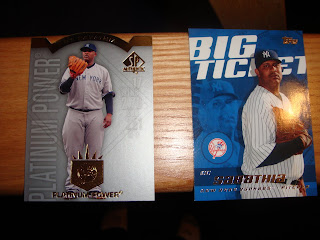 2 C.C. Sabathias
Awesome cards, one is from 2009 SP Authentic, one of those old school die cut inserts, the Platinum Powers. No doubt a great card, and the second one is from 2009 Ticket to Stardom. Unlike many of you, I really like this set, and I think Topps & Upper Deck finished the year strong. I can't wait to get my hands on some 2010 Topps! Just wanted to throw that out there, hopefully I get to Target soon. The insert on the CC card on the right is one of the Big Ticket inserts, and that name certainly fits C.C. He is a heck of a pitcher and I'm glad to have him on the team. 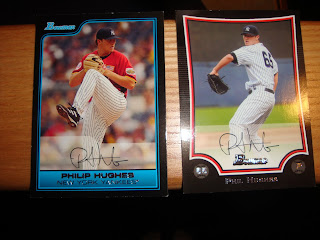 2 Phil Hughes
Both of these cards are a little plain (it's Bowman, what can you say?), but the one on the left is a rookie card and it is cool with the Futures Game jersey on (that is that jersey right?) and the one on the right was a quarter and I didn't have it, from 2009 Bowman. Cool, hopefully he can have another stellar season. Quick question for you Yanks fans reading: Starter or Reliever? I wanna say reliever but I think they need another starter. Comment with your opinion please. 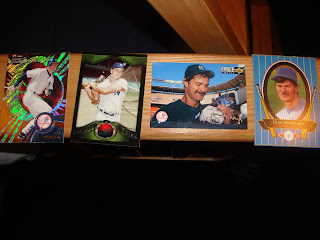 1 Paul O'Neill, 1 Roger Maris, and 2 Don Mattinglys
The Paul O'Neill is a really cool 90's insert, or is it a regular set (boy, times have changed!), and it was also a quarter so it was cool. The next one is a 2009 Legends of the Game Roger Maris. This card was really nice so I got it along with the Thurman Legends. I think I have around 6 of these now (A-Rod, Maris, Munson, Boggs, Gehrig, and Reggie, could use some more if you got em') so I definitely got my share of the insert set. From what it looks like some 2010 Topps inserts are nice, yet some are pointless. More on that another time. I bought the next card of Mattingly for a quarter, only because I needed to pick 1 more card out to even it out and I thought it would be cool to get a card of Mattingly signing autographs when he would be soon signing autographs for me. Get it? The last one is an oddball produced by the Metz Baking Company in the 90's. I got this card for free from a vintage vendor. She was really nice, and apparently she was given the Bill Simmons "best vendor" award at the National one time. She sells vintage cards and gave it to me out of kindness. Thanks if you're reading! 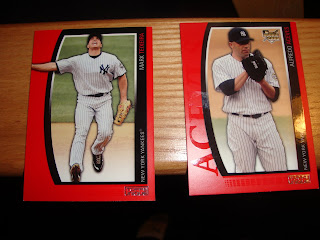 2 Topps Unique Red Parallel Cards
So, there is living, breathing proof if you haven't seen the cards that there are name engravings on the cards. They don't scan well, and I have no clue how to convert my scan files anyway, so let's just go with the old camera now. These are nice, and they are numbered out of 1199 and they're a one per pack insert. Nice! 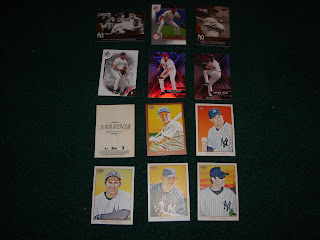 The Yankees cards from the packs in the last post
Nice Yanks in this little lot. Got the CC short print from 206, and a Swisher for the PC. Also getting a Jeter numbered out of 495 is cool, and a few more of those DiMaggio's don't hurt!

Overall, I did well with the base and inserts I picked up! I have a few more parts to this series coming very soon, possibly the next 2 tomorrow! Here is what I have planned for the finishing of the series: