Hey guys, Drew back here. If you read one of my posts a while back you know about the trifecta of a player. I think it is the easiest way to start off a PC, or the easiest way to know that you are the owner of 3 big parts of a player's card inventory, the rookie card, the game used, and the autograph. Whether the game used is bat, jersey, helmet, ball, batting glove, it is considered a game used. Whether it is through the mail, in person, certified on card, or certified sticker (:p), it is still an autograph.

A new task in my card collecting life is to pursuit all 3 parts of the trifecta for as many players as possible. I've always loved rookie cards, and most definitely the autograph. Game used can be fun to own, but I do get bored of the boring white jersey. There are a few rules in my book for the trifecta though:

1. It can be an entire baseball, bat, or anything else that is signed, or maybe even a full game used jersey or bat, they all count because they fit under the category.
2. They need to be 3 seperate cards, you can't have a rookie jersey autograph of Evan Longoria and say you have the trifecta, although technically you do, "tri" means three and is short for triple, so it needs to be 3 cards.
3. The jersey can not be from an event outside of All Star Games and Pro Bowls (no Rookie Premiere jerseys here!)

This is where I'm going to track who I have it of and picture evidence, I will write if any is for trade but most likely I'm keeping them all for PC. So, here is the ones I have the trifecta for now: 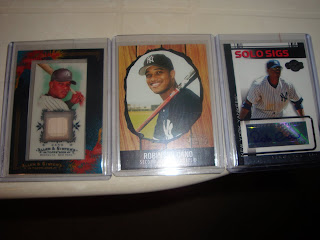 2003 Bowman Heritage Rookie Card- Picked this up at a card show at a local Holiday Inn a few years ago, I want to upgrade to the regular Bowman RC though.

2009 Topps Allen & Ginter Short Printed Bat Relic- Although I have many more Cano relics from all you generous guys here, this is the one that is the most rare, it's one of the short printed ones and is a beautiful card. Picked it up on eBay recently for $15 shipped.

2007 Topps Co-Signers Solo Sigs Autograph- This card is now mine thanks to a old trade with William, from foul bunt. Although it's a sticker auto, I went against using Triple Threads for this picture because I just wanted the single autograph. 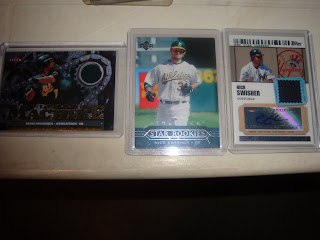 2004 Upper Deck Star Rookies- I do need an upgrade on this one, especially since it's one of my PC's, and this isn't a true RC, but it will do for now. I pulled it out of a pack long before Swisher became a Yankee, out of one of those boxes of mixed packs from Toys R Us. I was addicted to those things!

2007 Fleer Ultra Hitting Machine Relic- There are a few reasons I chose this one for my relic. First of all, my good buddy Mr. Scott practically gave the thing to me (but is getting something very soon), second of all the design is awesome, and third of all the relic is green! Awesome! No white or gray swatches in this house!

2009 Topps Ticket to Stardom Jersey Auto- Again, from a fellow blogmate, Derek from "Hey, That's Mine!". We made a trade for this a little while ago, and even though I have the Goudey on card auto I decided to choose one that was not obtained through buying, instead from a blogging buddy! The relic on this card is from an undershirt I believe too. 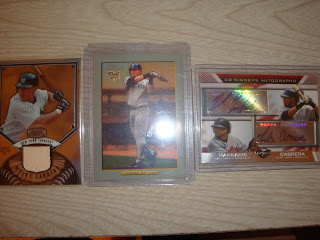 2006 Topps Turkey Red RC- I have the Topps rookie card from 2005 too, so that may be a better one to show off, but I like this card better. I got it in a trade at some point, forgot who it was but it sure is nice! I really like the look of the card!

2007 Bowman Sterling Bat Relic- I just recently got this in a trade with someone on the Blowout Cards Forum, and it sure is nice. Unfortunately Melky is a Brave now, but I really like the bat relic.

2007 Topps Co-Signers Dual Autograph Nick Markakis/Melky Cabrera- I could soon get the Markakis trifecta but I'm not sure when. This card was nice, and I got it off eBay for I think $15 a while back. It has a simple design, and it looks nice, other than the dreaded stickers! 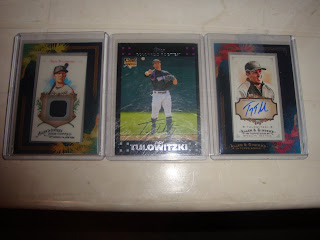 2007 Topps Rookie Card- The most original you can get, the Topps RC. I have a few other Tulo RC's, but decided to choose the basic one. I'm assuming I pulled it out of a pack at some point.

2008 Topps Allen & Ginter Jersey Relic- Again, not a white or gray jersey swatch! I pulled this out of a blaster sometime last year, and I really didn't want to trade it. He's turned out to be a good player, and he was on my fantasy team last year!

2009 Topps Allen & Ginter Autograph- Yay! On Card, yet encapsulated inside some plastic that I don't think tobacco companies used back then! I got this sweet card from again, William, foul bunt. He has a nice auto and I sure have a heck of a card! Thanks again dude! 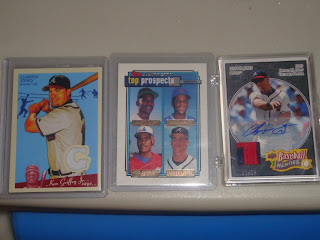 1992 Topps Top Prospects Rookie Card- I might look for the 1991 Topps one at the card show. I have like 4 of these cards, thanks to my dad because he got me a couple big lots of old (80's and 90's) cards from Craigslist. Pretty cool card though.

2008 UD Goudey Jersey Card- Darnit, the streak of non white/gray jersey cards has ended at 3. I have 2 different Chipper jersey cards, one is from 2008 Piece of History too. Pulled this in a pack from Target.

2008 UD Baseball Heroes Patch Autograph #ed/15- I remember pulling this card like it was just yesterday. It is possibly my most valuable card in my collection so you never could go wrong with something this sweet! He should be a first ballot hall of famer and is probably the second greatest Brave of all time, to Hank Aaron. I love having this trifecta complete, definitely one I'm gonna keep. 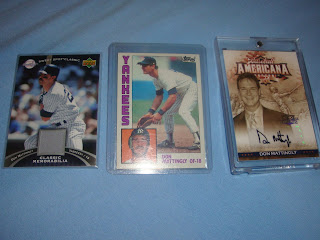 1984 Topps Rookie Card- Look at Donnie Baseball! Such a cool card and I'm glad to own it. My dad got this one for me a little while back, along with a 63 Topps Maris Postseason Highlights and a Strawberry RC. Dad loves giving me cards and I am happy to have a great dad like him.

2007 UD Sweet Spot Classic Jersey- Gray jersey but what are you gonna do? I have 3 game used cards of Mattingly and I certainly have some awesome ones. I bought this one at the card show in August in White Plains. These relics are really nicely designed.

2008 Donruss Threads Baseball Americana Autograph /25- Well, I gave it away. You guys I'm hoping were dying to see my big pull out of Threads, and this is it! I sorta wanted to wait for the review but I couldn't, it's not possible to keep a card this awesome from you guys. My dad opened the pack and he said to me, "Drew, I think you might like this one". We have this on video too actually, just on the PC. When I looked at the card my jaw dropped. Well, I'm still gonna spend the 70 bucks at the show to meet him, unfortunately it's a sticker auto. I wanna get an 8 x 10 signed so that's why, maybe I can get him to sign a card too, you never know. 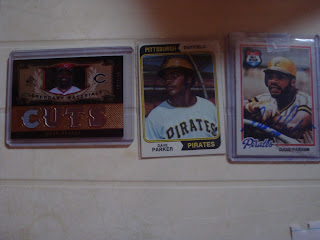 1974 Topps Rookie Card- I got this card and a few other copies of it from Pop Popps, my grandpa. He gives me so many nice cards that my collection is intensely growing every day. I have another version of this card autographed when I met Dave at one of those White Plains shows. I really like the card and I like Dave too.

2007 SP Legendary Cuts Jersey Card /199- I got this in a Blowout Cards Forum trade, and it's nice. I'm not a fan of the 3 blank relic spots on the card though, but it's ok. I'm thinking about looking for a Sweet Spot Classic relic of him. Kinda boring with the gray jersey, but still, he wore it and that's all that matters.

1978 Topps In Person Autograph- I didn't say much to Dave when we met him, but he was cool. I got 2 cards signed, and 1 was his rookie card. I didn't want to choose the same card twice for the trifecta so I decided on including the other one he signed. It's a pretty nice old school card and it looks great with a signature on it! 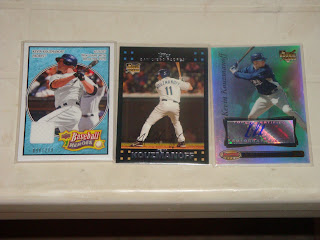 2007 Topps Rookie Card- Again, very original, but it's all I have of the guy. I don't open products before 2007 but if I opened a box of Bowman when he was in the set I'd probably pull a super fractor 1/1 autograph. The guy stalks me! He's an ok player at least.

2008 UD Baseball Heroes Relic /200- Well, the boring things about this card are hmmm.... the fact that Heroes has way better players in the checklist... that this is the highest numbered out of any relic parallel in the set, oh yeah, and it's a white jersey!!! Pulled this in a box and I have no clue how they can count this as a hit. Again, I don't want this guys cards but they all just come to me!!!

2007 Bowman's Best Rookie Autograph- This card is lucky because it's in Bowman's Best. Since there are very few good rookie autos in the set, he is considered one of the better autos. But he is not good enough to get game used cards yet, so Upper Deck, just stop it. But Bowman did a good job with this set (it'd be better on card). I pulled this in a box of it that I opened, the most high end I've ever been. 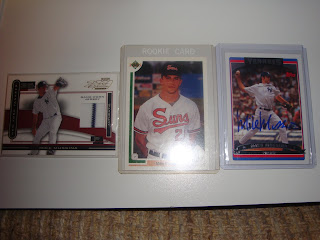 1991 Upper Deck Rookie Card- A very cool rookie card of the Moose, I do have his more popular rookie card and it's signed, but for display I'd rather have 3 different cards. Very cool card with the minor league uniform, awesome!

2003 Playoff Piece of the Game Jersey Relic- We got a pinstripe on this one! I love getting pinstriped cards, not when they aren't Yankees though. No other team should be wearing pinstripes. None. Anyway, I bought this one on eBay right after he retired, I love how on the back it shows a picture of the jersey it was cut from.

2006 Topps TTM Autograph- I sent out to Mike in the past year and he signed a few cards for me, and I was psyched to get them! I won another one in a 30 Year Old Cardboard contest, along with a John Kruk auto and a Bobby Bonilla auto. He has a sweet signature, and although I have 3 of his autos already I may send out more, and I'd sure love to meet him. He seems like a great guy!

Here are a few cards I need of seperate players to complete their trifectas:

I'll try to find a few more soon. Thanks for looking, and I'll see you all later!
Posted by Drew at 7:16 PM