Hey guys, Drew back here. As you see I made it out of mid terms alive, wait not yet, Math test Monday. Argh! Anyway, since it's the weekend, I felt like catching up, and tomorrow my mom and I might go to the mall to try to hunt down some 2010 Topps. Maybe a stop at the hobby shop for supplies could help too, I'm low on binder pages and binders. I also need some thick quality paper so I can get these TTM customs printed and shipped. Wow, quite a list! Well, I got 4 packages in the past week, so let's get started!

First up is a package from Tony over at Mike Pelfrey Collectibles. As you see he posted his share of the trade last Saturday, but the card show has been holding me up, and that's finally caught up, and I can FINALLY get back to regular blogging. Here are the cards, he sent me a ton of needed cards and says he has more for me, and we may get another trade brewing! Check these out:

6 2009 Topps Heritage Cards
Eric Hinske & Melky Cabrera Heritage Updates Base Cards, Ramiro Pena & Fransisco Cervelli Rookie Cards, and 2 Chrome cards of the newest Cub Xavier Nady and the newest Padre Jerry Hairston Jr numbered each out of 1960. Cool, needed them all! I really like the Rookie cards, Cervelli is going to be good. 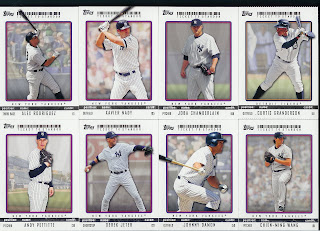 8 2009 Ticket to Stardom Yanks
Wow, needed 7 out of these, I got the Jeter before but needed all the rest of them! The Granderson is a perforated parallel, and he is going to be great as a Yankee. I could use his 1st Yankees card, the shortprint in 2010 Topps, and of course, the Swisher & Cano Pie in the Face Short Prints. It's awesome that they are doing that. Out of this bunch though my favorite may be the Pettitte, Damon, or A-Rod. They used good pics on those cards. 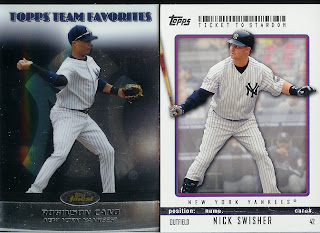 2008 Finest Cano Topps Team Favorites
2009 Ticket to Stardom Swisher
Awesome, 2 more cards for my PC's. Swisher is barely hanging on to his pinstripes, but I think he'll stay. Very cool though. I saw a guy selling the Cano at the card show for I think like 10 bucks. Ridiculous! 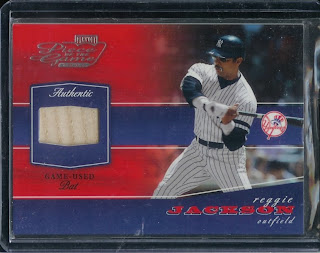 2002 Playoff Piece of the Game Reggie Jackson Bat Card!
This is my first relic of Reggie and boy it's sweet. I have a bunch of his 70's cards and they are very nice, but it's cool to get something modern of Mr. October. Although it's just a small sliver of bat, it's very cool looking and it adds to my very small yet growing bat card group. 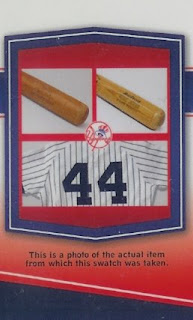 This is my favorite part about this card though. On the back it shows what jersey they or bat they took the relic from. How nice! If only Topps and Upper Deck could think of doing that! Thanks Tony for the cards, great stuff!

Next we have 2 Blowout Forum Trades.... 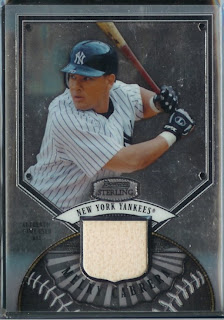 2007 Bowman Sterling Melky Cabrera Bat Card
I traded my 2008 Donruss Threads Wilson Ramos Prospect Autograph for this, and you may be asking "why the heck would you want this since he's a Brave?" Well, needed it to complete his trifecta, so it's a nice card for that. You can check out the trifecta page here, as an update to the post will be added with the newest completed trifectas. 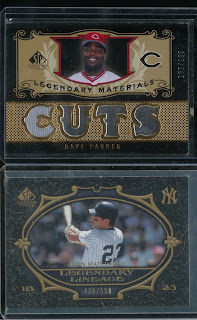 2007 SP Legendary Cuts Dave Parker Jersey /199
2007 SP Legendary Cuts Don Mattingly Short Print /550
This was the next trade on the Blowout Forum. I have officially made 7 trades on that site and I think 5 or 6 on the Sports Card Forum. You should definitely check those sites out if you haven't already, they're great for trading. It's cool that I met both the guys on the cards, and I needed the Parker for the trifecta. Since I did nothing to improve them at the card show I traded for a few cards for trifectas. I like the Dave Parker card but I hate the 3 blank spaces in the relic design. I have a Joe Torre triple relic from this set too and that's a sweet one. The Mattingly shows a nice picture and deserves to be a short print.

Last was a sweet eBay purchase... 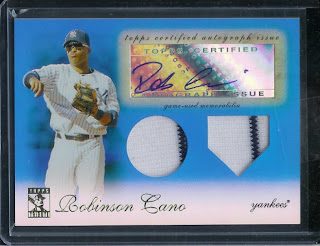 2009 Topps Tribute Robinson Cano Blue Dual Jersey Auto /75
I love this card and suddenly it may be my favorite Cano card I own. This is my 5th Cano auto and it's numbered out of 75. I got it for about 15 bucks, which in my book is a pretty good steal. This set has some really nice cards but paying 50 bucks a pack for something like this, or the mass prodcution of Jay Bruce, Dustin Pedroia, Clayton Kershaw, Evan Longoria, and David Wright, is just not worth it. Now Topps is admitting that the Ruth triple relic is seat/jersey/seat. Yuck! People paying big money for cards that look like they have bat relics but really they're pieces of a seat that maybe your great great grandpa sat in! I heard these cards can get smudged easily so it's staying the plastic. I love the card and hope to get other versions of his cards in the set.

Hope you liked the cards, thanks to everyone I traded with in this post, and see ya!
Posted by Drew at 9:40 AM