3 Cheers for the Hawk! And 3 Jeers for Hibachi!

Hey guys, Drew back, and I haven't covered much in sports lately so I guess I should sorta recap a ton of stuff that just happened in the sporting world, and although I almost never post anything basketball related, I need to address my opinion on what the heck happened in the Gilbert Arenas situation.


All I can say is Wow. Wow applies to both me and to Gilbert Arenas, me because I thought nobody can EVER do ANYTHING as stupid as what he did (shame on me), and him because he did the STUPIDEST THING I'VE EVER HEARD OF... well... since Plaxico at least. This one was up there too. If you haven't heard what happened, I'll fill you in. So Gilbert was gambling with Javaris Crittenton, and he didn't want to pay him back after losing, so he pointed an un-loaded gun at Crittenton as a joke. Joke? WTF! How in the world is pointing a gun at someone a joke??? In any way, shape, or form, pointing a gun for fun is ridiculous! He said afterward that he learned not to do that again, how have you not learned that already? Wow, that is plain pathetic. And now he is suspended indefinitely. This story is almost as brutal as my New Jersey Nets!!!

Congrats to Andre Dawson for finally making the Hall of Fame! It took him 9 years, but he is finally in, which makes many of our bloggers happy. I didn't watch him play, but he certainly seemed to be a big threat back when he played. The only person I want to see make the Hall on the ballot right now is Don Mattingly (and can I wish for Billy Martin?) but I assume his stats aren't good enough to make it in, but boy do I wish. So, again congrats to the Hawk!

Randy Johnson finally hung up his cleats yesterday, after a very long and fantastic career. He is most definitely a first ballot hall of famer and although he didn't fare well in New York, he sure did do phenomonal on his other teams. And boy, I love the mullet! 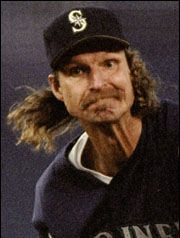 and he also should be a hunter, cuz he is good at killing birds!

Lastly, I need to cover my boys from New York... er... New Jersey? Go Jets! I can't believe they made it, and in style too! Even though we're halfway through the week already, I must say that was a complete blowout and hopefully we can do it again next week, isn't that right Mr. Chad Johnson/Ocho Cinco/Hachi Go/Get scared of the Jets and "get hurt" before the game starts after talking smack ALL week long. Thank you Darrelle Revis, YOU OWN!!

Also in sports, Matt Holliday signed with the Cardinals for 7 years, Tom Brady is comeback player of the year, and Rex Ryan says we're gonna the Super Bowl. And I'm going to get the luxury suit tonight. (commercial joke)

Oh yeah, change in votes, somebody else win Tom Brady is caught cross dressing! Take it from hum please! See Ya!