Hey guys, Drew back here. I've been on an absolute surge on eBay lately, buying a lot of new stuff. Not to mention I'm going to the card show in a couple weeks, and I've got a lot to look forward to. So the money will blow away, but what else would I do with it, except for maybe buying some Xbox games? So, with that in mind, you should be seeing a whole lot more of me this month, with some personal issues pushed aside and a goal to keep you all entertained buzzing through my head. Check out this card, another one of many recent buys to boost my collection: 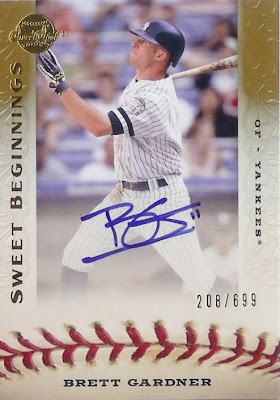 Out of 2009 Upper Deck Sweet Spot, the rookie autograph card numbered 208/699 of Yankees outfielder Brett Gardner arrived in my mailbox! I spent a good bit of money on this, since he only has a few certified autographs, and he's often high in demand. He's one of the most entertaining players in baseball, who is sporting a .278 batting average with 4 home runs, 61 runs scored, and 33 stolen bases! He's one of the fastest players in the game and will very soon come home with his first of hopefully many gold glove awards. He covers a lot of ground in the outfield and is known to make some sweet catches!
Picking up this autograph knocks off just another Yankees autograph in their 2011 starting lineup, and as of now I'm in need of Russell Martin, Alex Rodriguez, and Jorge Posada. However, one of those was recently picked up and you'll see it in a few days when it comes in the mail! I love the fact that this card is on card, and with the popout baseball seams, it really represents baseball well. Already with one World Series championship, it sure has been one "Sweet Beginning" for Gardy!
See Ya!
Posted by Drew at 12:36 PM