Autographs Found in the Recent Tubs!

Hey guys, Drew back here! Today, I'll continue my recent catch up mode, and share more from the most recent tubs of stuff my dad picked up off of Craigslist. This post will be dedicated to the 8x10s and autographs we found, because there were an awful lot of them! 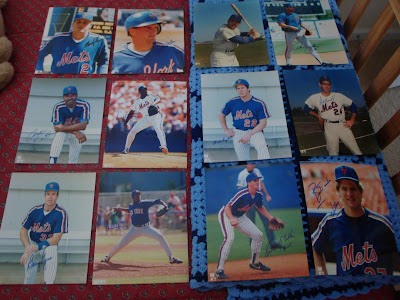 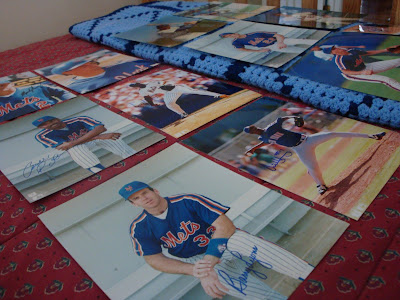 Well, as I've already established before, this guy was definitely a big Mets fan, as evidenced by the loads and loads of Mets 8x10 autographs. I'm not sure who half of them are, but I know these ones were right: Mackey Sasser, Keith Miller, Ed Kranepool, Howard Johnson, Kevin McReynolds, Art Shamsky, and Barry Lyons. The others I do need a little help identifying, so if you could click on the pictures and take a look at the ones I didn't mention, I'd really appreciate it.
As for the pictures, they're pretty nice, but I'm not all that sure what to do with most of them. I will part with most of the Mets ones for a Yankees autograph in exchange, so let me know if you're interested. 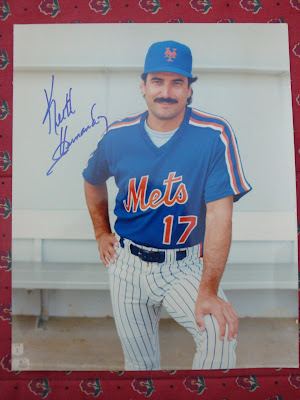 This one I knew! None other than former Gold Glove first baseman Keith Hernandez! Hernandez is close to the level of Don Mattingly, pretty much the Mets version of Mattingly, throughout the same time period. He won an MVP in 1979, and made 5 All Star teams in his 17 year career. He didn't hit a lot of home runs but was a solid hitter for batting average, his highest single season average at .344 in his MVP season. He was best known for his fielding, winning 11 straight gold glove awards at 1st base! This is definitely the highlight of these Mets 8x10's, and the autograph looks sweet. 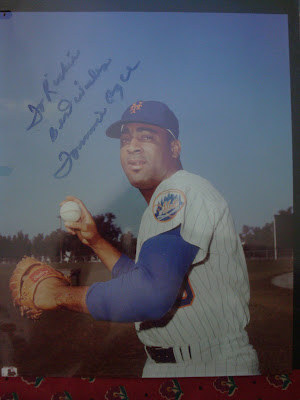 Another one of the better Mets autos was of 1966 Rookie of the Year winner Tommie Agee! Agee was the starting center fielder on the 1969 Mets World Series team, and was an overall solid player during his 12 year career. But let's take a closer look at the auto: 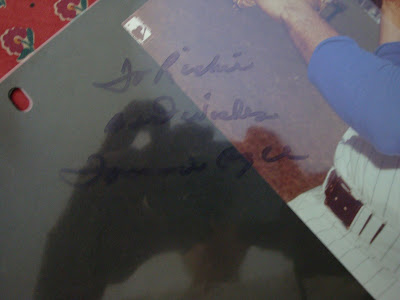 Yeah, Agee signed the page cover, not the photo. I've never seen this before, but I'm sure the Rich guy that owned it wasn't very happy with it. Agee died in 2001 to a heart attack, at the age of 58. Definitely a neat little autograph though. 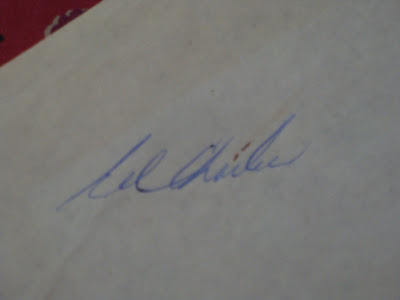 I found this autograph on a scrap of paper laying around. I have a good feeling that it is of former Mets 3rd baseman and 1969 World Series team member Ed Charles. Again, not 100% positive but that's just my guess. 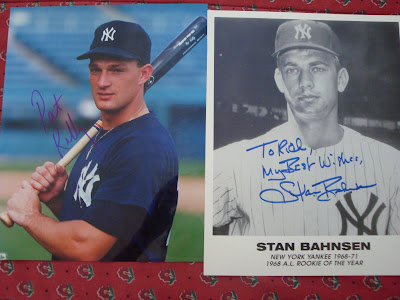 Fortunately, there were some Yankees in there too, these two photos signed by Pat Kelly and Stan Bahnsen. Kelly was just a decent 1990's Yankee, who played 7 seasons for the team. He batted .251 in those 7 seasons, and played in 591 games. Following the Yankees, Kelly played a year with the Cardinals and Blue Jays, and then retired. As for Bahnsen, well, he was the 1968 AL Rookie of the Year, but after that, he was just a decent pitcher. He lost 21 games in 1973 for the White Sox, and finished his career with a 146-149 overall record. He played 5 of his 16 seasons for the Yankees, going 55-52 with a 3.10 ERA. 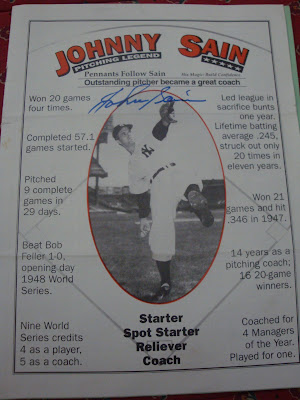 I also found this picture of Johnny Sain, that listed many of his accomplishments, and it was actually signed by Sain! Whenever I think of Sain, the saying "Spahn, Sain, and Pray for Rain" comes up in my head. That must've made for a pretty good pitching rotation, because during Sain's span with the Boston Braves with Warren Spahn, he won over 20 games 4 times in 7 total years with the team! After that stint he went to the Yankees, became a relief pitcher, and helped the team win the World Series in 3 straight years. He died in 2006, so it's cool to own his autograph for sure. 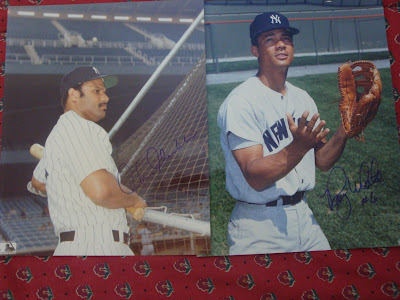 Some other Yankee 8x10's I found were of Chris Chambliss and Roy White! I have an awful lot of White autographs at this point, but I really like the look of this photo. As for the Chambliss, it's now the 2nd 8x10 autograph I own of his, but unfortunately, neither have been the one I want of him, of his famous home run. Oh well. 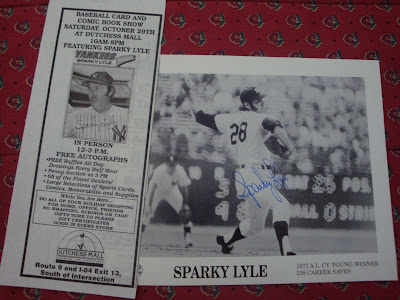 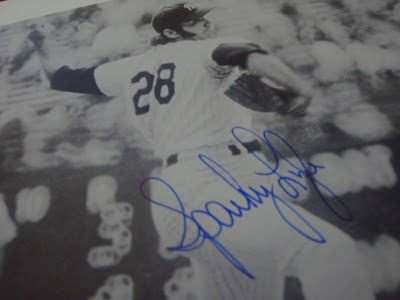 Next was this Sparky Lyle autographed picture! I read a good amount of Lyle's book "The Bronx Zoo" and I really started to like him, because he seemed like a big goofball that sure knew how to pitch. The picture came with an advertisement for the signing this guy must've went to, and while the autograph looks legitimate already, that's just more of a reason to say its real. Plus, what man would collect fake autographs anyway? 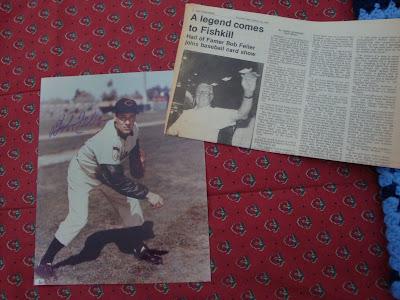 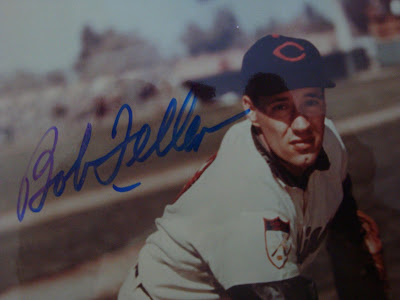 Similar to the Lyle, I also found this sweet 8x10 autograph of Bob Feller! I'm a big Feller fan, and this is now the 2nd 8x10 autograph of his that I own! He actually, according to the newspaper article, came to a local area a couple of years ago for this autograph signing. It looks like under the F in Feller, he may have messed up his signature, but oh well, it still looks great.
That's pretty much it for the most part, except for one last picture that is going to have its own seperate post. Anyways, if any of you can help with identifying any autographs or have interest in any of the Mets ones, please comment and let me know. Thanks!
See Ya!
Posted by Drew at 1:34 PM