Revealing the Mysterious Binder... A Little at a Time... Awesome Rookie Cards!

Hey guys, Drew back here! So, I believe the binder series is almost complete, with this and maybe one more following it! I don't think I could ever be any more lucky in my life than I was with this thing. While you probably already are jealous enough, I'm sure you will be even more jealous after you see these: 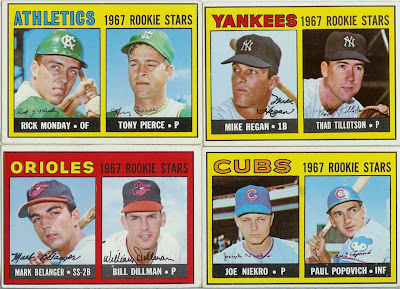 This post is dedicated to the rookie cards I found in the binder. These 4 1967 Topps rookie cards were fairly nice, as the main rookies out of them were Rick Monday, Mark Belanger, and Joe Niekro. I really like the 1967 Topps set, its fairly colorful and has a lot of nice photos in it. I bet I could even build it one day with the amount of cards from it that I found in the binder. 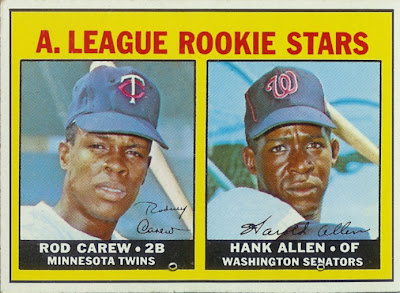 The first big rookie was also from the 1967 Topps set, of Minnesota Twins legend Rod Carew! Before I get into Carew more, Hank Allen, the other player on the card, was a decent utility player, who could play anywhere. He wasn't as great as his brother, Richard "Dick" Allen, but he was an average player in his 7 year career. As for Mr. Carew, well, what can't you say about the guy! In a 19 year career, Carew spent 12 years as a Twin, and 7 for the California Angels. His lifetime batting average speaks for itself, an incredible .328! In that 19 year career, he was named to 18 All Star teams, and was named the AL Rookie of the Year following his rookie season. In 1977, he won the AL MVP by posting a remarkable .388 batting average for Minnesota. He's also a member of the 3,000 Hit Club, and obviously, the Hall of Fame!
This card normally sells for quite a bit of money, typically from between $75 and $300, depending on the condition, with a possibility of it being worth even more graded. So its safe to say it would've been a major pain to land this card without having to shell out quite a bit of money! It's a beautiful card, in very nice shape, and I definitely am happy to add it to my Hall of Fame rookie card collection. 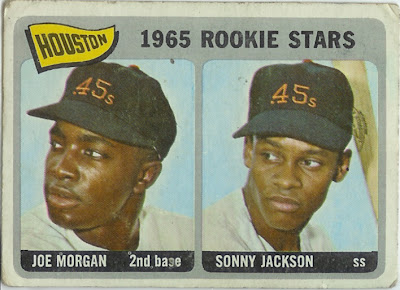 But that's not all! On the final page of the binder, I found this 1965 Topps Houston Colt .45's rookie card of Joe Morgan and Sonny Jackson! I got this same card from my Pop Popps a while back, and already wrote a bit on Morgan and the card in general when I first posted it. I'm definitely happy to find a second copy of the card, but I'd be very interested in trading this straight up for either the 1961 Topps Juan Marichal rookie or the 1961 Topps Ron Santo rookie, that way I can help my set rather than have 2 of the same card. Let me know if you have either of those, or any other nice Hall of Fame rookie that you would trade for it.
Well, that's it for this part of the series dedicating my pot of gold! Hope you enjoyed it!
See Ya!
Posted by Drew at 7:35 PM