Mail from The Lost Collector!

Hey guys, Drew back here. So apparently, there's been this "lost collector" running around the hobby lately. He's been running around to all the blogs trying to find his way into the hobby. I guess he's doing a pretty good job, considering he has a great blog and sends us bloggers some great packages. Kidding aside, I got a package from AJ of "The Lost Collector" about a week ago and wanted to show off my end of the deal. Take a look: 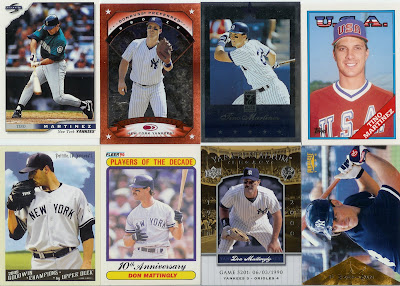 First off were a few extras he threw in for me. I needed most of them, and love that Tino Martinez USA card! AJ gave me a new Mattingly card, which is now the 188th card of his that I own. Just for reference, he is a big Yankee fan and Tino Martinez collector as well, so if you've got any good Tino stuff definitely go to him! 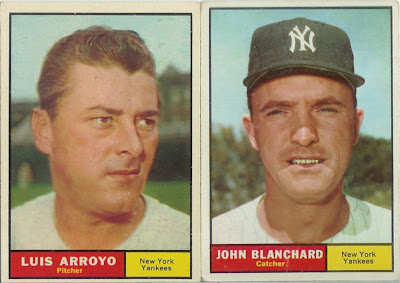 The actual deal was that I sent him 2 1968 Topps Game Cards, from the set he's collecting, for these two 1961 Topps Yankees! Luis Arroyo was a decent pitcher who played for several teams throughout the 1950's and 1960's, and Blanchard was a very good defensive player on his 8 seasons with the Yankees. Pretty cool stuff for sure, and glad to add them to the set! 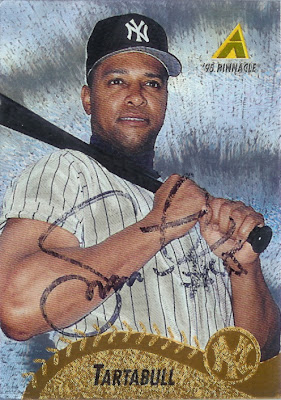 Lastly, AJ was cool enough to include this signed 1995 Pinnacle card of Danny Tartabull! I remember one of the first Yankees cards I ever owned in my collection was a Danny Tartabull card, so it's cool that this card made me remember my days as a (really) young collector in training. He was a solid player in the 80's and 90's, hitting 262 home runs in his career, and he's got a good looking autograph.

Thank you again AJ, I really appreciate the set help and the extras! Please everyone go check out his blog, ESPECIALLY if you have any of the 1968 Topps Game Card set that he's trying to collect!