Hey guys, Drew back here. I guess it's time to start the review for the White Plains show I went to a few days ago! This time, we're gonna do 2 pickup posts, one on modern cards and one on vintage, followed by meeting the players and my experiences with them, and we'll wrap it up with one more post. You'll have to wait and see what that is... for now, here's the modern stuff I picked up:


Part 1:
The New Stuff
Well it was packed once again at the East Coast Spectacular, as many fans poured in to meet perhaps the greatest lineup the show has ever provided. We did one thing off the bat we never did before, rather than coming in and waiting in line to get our autograph tickets, the line was so long we just entered the show then and got our tickets when the line died down. We soon realized we needed this early time. Mike and I spent most of the day in lines for autographs and I didn't get to buy a whole lot. But, I definitely got some sweet stuff for my collection! First though, Dad got me some mixed $1 grab bags and they ended up actually being pretty cool. Take a look: 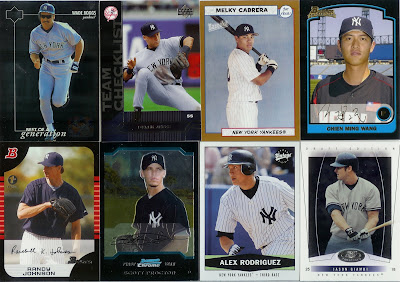 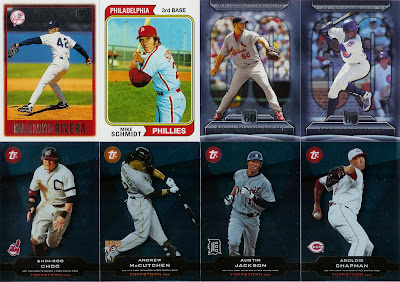 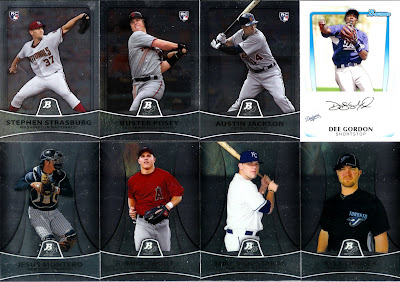 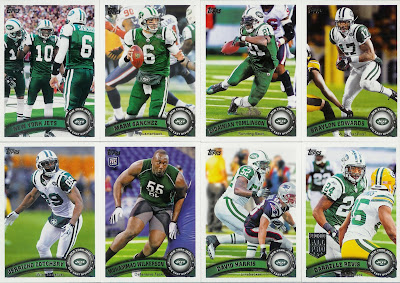 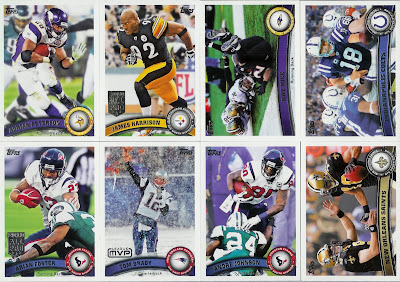 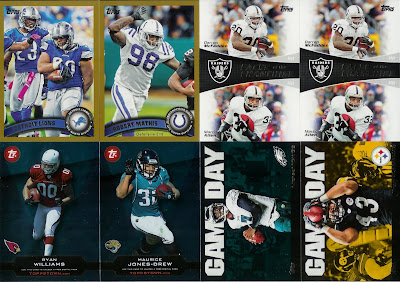 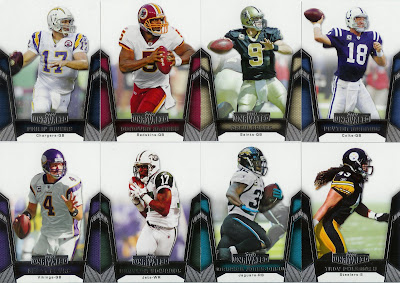 These grab bags were definitely helpful, as I haven't touched any of the new 2011 Topps football product, as well as the Topps Unrivaled, and baseball wise, I haven't gotten much Bowman Platinum. The best pack had rookies of Buster Posey, Stephen Strasburg, Jesus Montero, Kyle Drabek, Mike Moustakas, Mike Trout, Dee Gordon, and Austin Jackson! Not bad for a buck! 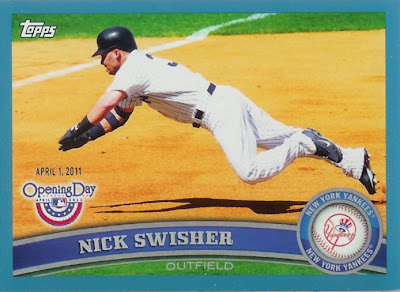 Dad also picked up this Nick Swisher 2011 Topps Opening Day Blue Bordered Card, which is numbered to 2011. Swisher's base card from Topps this year is really sweet, and I can't get enough of the parallels and what not. I didn't have this yet but I'm definitely happy to add it. 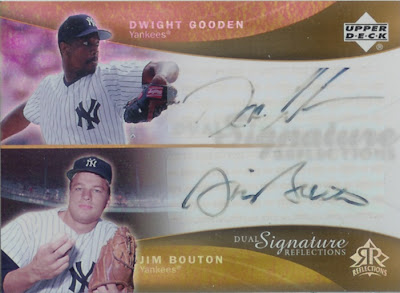 Next, Dad got me this card as well as the next 2 cards all combined for $20. Had the autographs been not as, well, faded, any one of these 3 could have been $20 seperately. This first one is a dual autograph of Dwight Gooden and Jim Bouton. I don't know what these 2 really had in common other than the fact that they both pitched for the Yankees during their careers. However, minus the autograph fading problem, it's still a nice card, and it's my first Bouton auto in my collection. 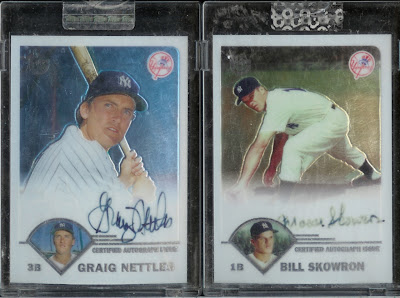 The next two autographs were both out of the 2003 Topps Uncirculated autograph set, and I'm very tempted to take them out of their scratched up cases. The two autographs are of Graig Nettles and Moose Skowron, two great former Yankees. I have gotten their autographs before, but it sounds like Dad got too good of a deal to pass up. The Skowron autograph is the most faded of any of the autographs in the lot, but it still looks pretty cool and I'm happy with it. Now I just need to get them out of their cases. 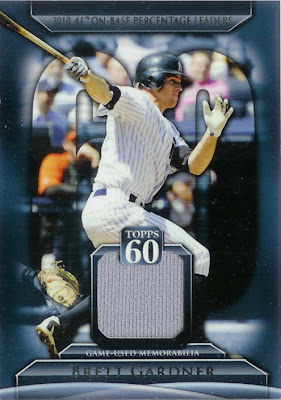 Now on to my pickups, for the rest of this post at least. We'll start with this 2011 Topps 60 relic of Brett Gardner. The seller was a really cool guy and I talked to him for a few minutes, and this, as well as the next card caught my eye. I got them pretty cheap. Gardy's having a very good year, especially when the Yankees don't expect him to be the best hitter on their team. He lives up to their expectations for sure. This is my first relic of Gardner, which means I completed his trifecta by adding this card! Sweet! 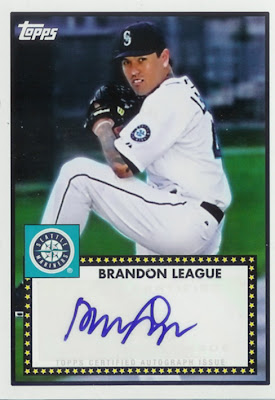 Also from that seller, I got this 2011 Topps Lineage Brandon League autograph for a couple bucks. League, as well as most other relievers, are very undervalued in the hobby, while they are key contributors for their teams. League has been a staple in my fantasy baseball bullpen this year, with 30 saves and an under 3 ERA while having to close out games for the worst offense in baseball. I'm not sure how much I like these Lineage autographs, perhaps if they were on card I would like them more. They feel a little cheap is all, I think. 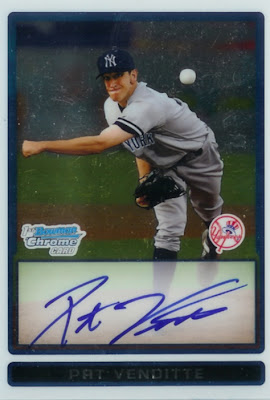 Next, I got this autographed card from 2009 Bowman Chrome of the Yankees ambidextrous pitcher, Pat Venditte. I've been wanting his autograph for a while now, and I'm happy I finally got one. Venditte is infamous in baseball for an at bat where he threw to a batter with both arms (link). Venditte's dad taught him at a young age how to throw with both arms, and while he may never amount to a big league pitcher, it still is cool to have in the collection. 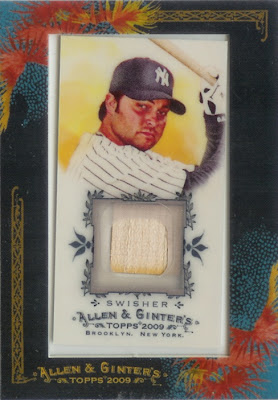 Here is a card that has eluded me for the past 2 years, since 2009 Allen & Ginter was released. It is just the simple bat card of my favorite player, Nick Swisher, but it's more than just a bat card of his. This is a card I've seen only a handful of times online, on eBay, anywhere. It's a super short printed relic and they typically sold for like $20-30, which was always too much for me to want to drop on just a simple bat piece of his. I wrote off the card, and figured I'd never get it.. but then, I saw it, for $10 at a vendor at the show. Now, its mine! 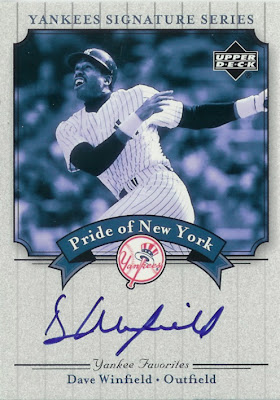 The final card produced within the past 10 years or so that I picked up was this 2003 Upper Deck Yankees Signature Series autograph of Hall of Famer Dave Winfield! I met Winfield around that date 2 years prior to this year's show, but didn't pay the price to get an autograph. Instead, I caught him in line at Nathans. I'll always remember him, as one of the best players I've ever shaken hands with. For $25, this card was totally worth it in my opinion. Winfield spent 9 of his 22 seasons with the Yankees, and was regarded as one of the best all around athletes to ever play the game. He recorded over 3,000 hits and over 400 home runs, and is one of the only players to do so.

All in all, there weren't many, but of the cards I picked up, I'm definitely happy. The show has always been so worth it to me, and you'll see more reasons why in the upcoming posts!