Hey guys, Drew back here. Well, I tried making a big comeback, but so far with so many plans and camp and stuff in the way, looks like it's not gonna work too well. Well, I guess its the thought that counts. I've definitely got a sweet post coming soon based off of tomorrow, but otherwise there's a lot to post in not a whole lot of free time. Guess that's never a big problem, its better than having nothing to write about. Anyways, check out this awesome card I just bought! 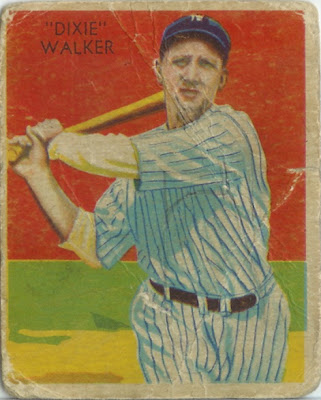 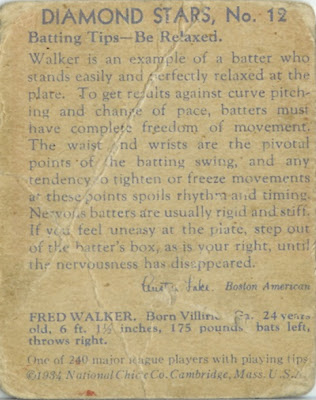 Out of the 1934 National Chicle/Diamond Stars set, I got card #12, of former Yankees outfielder Fred "Dixie" Walker. While Walker was known mostly for his days with the Brooklyn Dodgers, he also began his career in 1931 for the Yankees! To be honest, I knew absolutely nothing about this guy until after I won the card, but immediately researched him. Dodgers fans gave him the nickname "The People's Cherce", cherce basically meaning choice in the "Brooklynese" language. He won the batting title in 1944 with a .357 batting average, and also made 5 All Star teams in his 18 year career.
Walker is especially famous for being the only player in baseball history to be teammates with both Babe Ruth, and Jackie Robinson. An interesting story to relate with Robinson, was that when Jackie was about to be called up by Brooklyn, many Alabama natives pressured him to make a statement by asking to be traded. Having negro league players being called up in the Majors was obviously a new thing, and at the time many players didn't want to associate themselves with Robinson. After never being traded, Walker was forced to play with Robinson, and for Jackie to avoid being embarrassed he would not look in his eyes when they shook hands and what not. Eventually he gained a lot of respect for Jackie, saying that Branch Rickey was 100% correct with the idea to sign him. He went on to coach in International Leagues with players of many races!
I found that to be a really interesting story, and it's definitely neat to own a card of his. He retired with a .305 lifetime batting average, over 100 home runs, and was often considered for several MVP awards.
The card certainly is not in tip top condition, but it almost looks weird to own a mint condition card from this time. Its got a few decent creases, but I spent under $10 on it so it'll definitely be something I want to hang on to, and get in a nice screwdown. This is now my oldest card by about 19-20 years, and I hope to find stuff for good prices even older than this! They're definitely pretty cool to own!
What is your oldest card and how did you get it?
See Ya!
Posted by Drew at 10:15 PM