Hey guys, Drew back here. It's been a while, but we have another edition of the "Vintage Cards from Pop Popps" series. As you all know, my Pop Popps has been a great helper to me in building up a well rounded vintage collection, and has gotten me cards from all sorts of former greats, including some Hall of Fame rookie cards! The last time I did post a stack of cards from him I wrote that it may have been the final stack I'd ever receive from him, yet I was surprised to receive one more stack just a few days ago. Take a look and see what was in it: 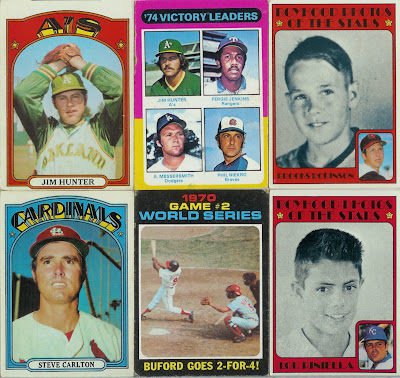 There wasn't one card that could lead the pack, but a few solid Hall of Famers can certainly make me a happy camper! With 1972 Topps cards of Steve Carlton and Catfish Hunter, along with "Boyhood Photos of the Stars" cards of Lou Piniella and Brooks Robinson, this group of cards was fun to flip through. The best card in my opinion was the 1975 Topps Victory Leaders featuring Hunter, Ferguson Jenkins, Andy Messersmith, and Phil Niekro. If Messersmith is the worst pitcher on the card then it sure can be worse! Most of the cards ranged from 1971 to 1975, as they do in most other stacks he's given me, which is really cool. I'm sure if I counted up the amount of 1973 and 1975 Topps cards I have I could attempt to build those sets.