Great Addition to the Yankees Collection!

Hey guys, Drew back here. It's been a good day for me, why you may ask? Because, I'm prepared to take on a wonderful 3 day weekend! Not only that, but I also don't have anything to do this weekend, other than preparing for finals and hanging out with some friends. Sounds so great to me that I just had to put it in words to relieve all the horrible stress I've had lately!
So, a week or so ago, I was surfing eBay for something new while talking to my good friend and fellow blogger William, and I found something I liked extremely fast. Usually when I use eBay I go to the Sports Memorabilia/Fan Shop section and update it by "Ending Soonest". This card literally had only 10 seconds left, and the current bid price it had just left me shocked. There was no way I was gonna pass up that deal! I quickly clicked on the auction, bid on it and snatched it up in a heartbeat. At this point, I'm so addicted to eBay that this purchase was very half-hearted and I didn't even question if I should bid on it or not, until, obviously, after I bid on it. But I won, and there was nothing I could do except erase some money from my allowance (the allowance pretty much is considered eBay credit at this point), and own a sweet new autograph... 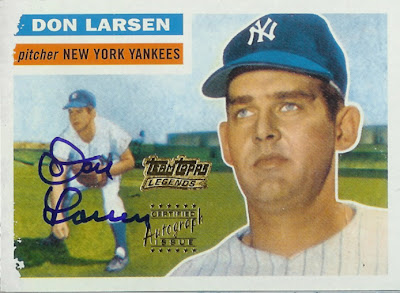 From 2002 Topps Team Legends, I picked up this sweet Don Larsen on card autograph, for about $4 in total! The card is a reprint of Larsen's 1956 card, obviously, the year he threw his famous World Series perfect game against the Brooklyn Dodgers.
Unfortunately, it took me a minute to realize that there obviously had to be something wrong with this auction, because the end price was far too cheap for a perfect auction and perfect card. I then realized that the left side of the card is damaged, almost looking like someone put 2 pieces of tape over the top left and bottom left corners and peeled it off. However, by reading in the description box, the seller said the card was pulled out of the pack in this condition. I don't know if that is true or not, however, I don't care, because it still looks awesome, and an autograph that cheap can't possibly be complained about.

All in all, the card still looks incredible, and it is now my second Larsen autograph in my collection. My plan is to send him a photo and custom for a TTM in the future, which would be really cool.

If you were in my spot, would you have bought this card knowing of the damage taking away from overall quality of the card?