Hey guys, Drew back here. Today was a nice mailday for me, receiving 2 new TTM successes! For time's sake, I'll post them one at a time. Starting off with the first one I opened, here is the newest addition to my Hall of Fame series! 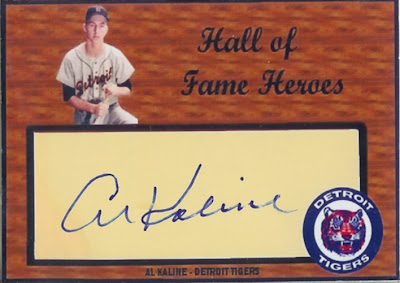 None other than Detroit Tigers legend Al Kaline signed a card for me in about 9 days! It took me a while to actually get this custom out in the mail for some reason, as it was sitting on my desk for months. But a little over a week ago I realized that it was about time I try and get his autograph! I included $10 in the envelope and sent it off, hoping and I praying that it would come back. Sure enough, it did, and it looks great! For Kaline, it may have been a little sloppy, but every letter is still readable and I think it looks awesome.
To say that Kaline was worth the $10 is a definite understatement. The former 18 time All Star outfielder, known as "Mr. Tiger" to the fans in Detroit, was one of the best all around hitters in baseball history. He collected 3,007 total hits in his 22 year career, along with 399 home runs, and a lifetime batting average of .297! In the field, he was incredible, winning 10 Gold Gloves in his career patrolling Right Field in Tiger Stadium. In fact, Cooperstown decided he was so great that he was inducted into the Hall of Fame in 1980 after his first appearance on the ballot.
I surely am glad I was able to add this awesome piece to the Hall of Fame set today, but it hopefully won't be the last. So far in my set I have autographs of the following: Bobby Doerr, Bob Feller, Monte Irvin, Duke Snider, Lee MacPhail, Joe Morgan, Jim Bunning, Brooks Robinson, Ralph Kiner, and now the aforementioned Al Kaline. If anyone has any suggestions of guys to go after next please comment and let me know! Thanks guys!
See Ya!
Posted by Drew at 7:36 PM