Heck of a Package from a Heck of a Guy!

Hey everyone, Drew back here. After a long day walking the floors of the Museum of Natural History, I'm about ready for either sleep or something super entertaining to make up for the tiny amount of fun I had today. Fortunately, maybe a week ago now, my awesome friend and fellow blogger William sent me an enormous box of all sorts of goodies! He recently moved from an apartment and unloaded a bunch of unwanted Yankees stuff for Connor and I to share! Take a look! 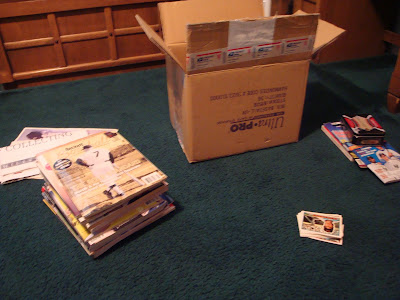 My dad came walking into my room that Saturday, saying, "Drew, you have a package", while holding by far the largest package I've ever gotten in my life. 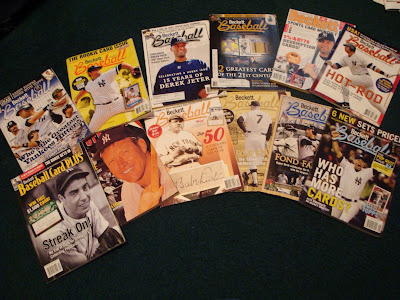 In the box was a good 15-20 old Beckett Baseball magazines, spanning from the late 1990's to basically now. Going through the articles was certainly fun, especially the one after the Yankees won the World Series in 2009, as well as the Tuff Stuff magazine published just following the passing of Mickey Mantle. That magazine featured a really interesting interview that they had with Mickey just before he passed. 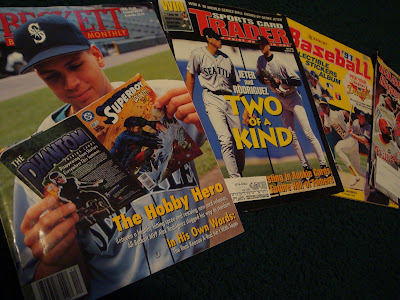 Some of my favorite magazines were these old Becketts from the mid 1990's. Both of them featured a young Alex Rodriguez, before the steroids! In the first, he's shown reading a Superboy comic book, and the second also featured Derek Jeter with A-Rod! I didn't get an opportunity to read them yet but I'm sure it will be fun to read, especially when I can look at their current statistics today. 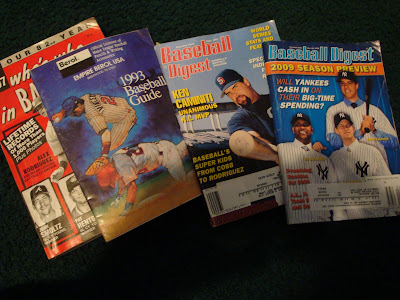 Finally, there were also a few smaller magazines and articles in there, including the 2009 Season Preview book. Jeez, I wonder how those 3 Yankees on the cover turned out for them! 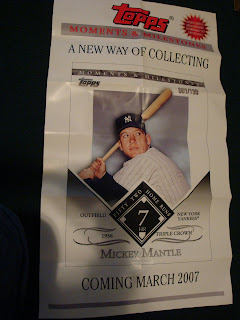 Also in there was this cool poster advertising the release of 2007 Topps Moments and Milestones. I'm assuming he got this at his old card shop where he used to work, so it's neat to own something that most likely hung up in a card shop. Moments and Milestones certainly was not one of the best products ever made, in fact, I can clearly state it was one of the worst, but its still very neat to own. 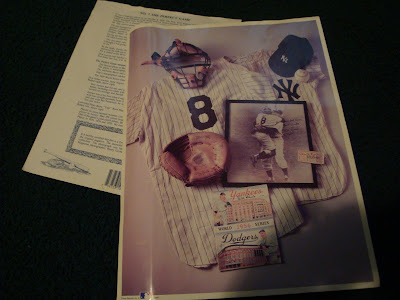 Next was a large photo of many of the famous game worn memorabilia from the Don Larsen World Series perfect game! It came with some sort of certificate of authenticity, and also came a little bent up by the mail, but I think it would be pretty cool to get signed by Larsen TTM! We'll see if I get some time and materials to get it out, which should be interesting, but hopefully I'll get it done. 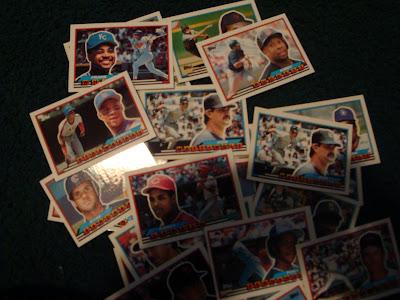 Scattered around the box were a good 5 or 6 loose packs of 1989 Topps Big baseball. I'm not sure what to make of these, because they don't fit in just about anything I can put them in, but I'm happy I pulled a few Mattingly cards at least. 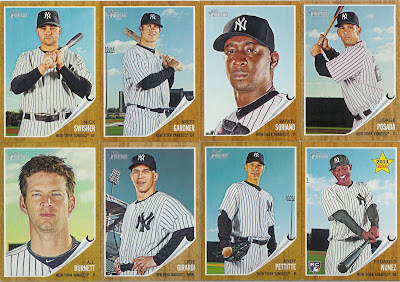 Perhaps my favorite part of the package came in a Sweet Spot Classic tin, a load of 2011 Topps Heritage cards! While I assume there's still plenty more Yankees to find in the set, these knocked a ton off the team set list. I'm a big fan of the new Heritage design, and while most of the cards are basic close up shots, it really represents what the set was getting at back in the early 60's. 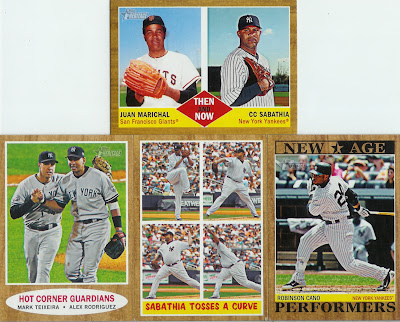 There were also a few subset cards and inserts from the Heritage set. The subsets included the CC Sabathia action shots, along with the Mark Teixeira/A-Rod "Hot Corner Guardians", and the inserts include the Marichal/Sabathia Then and Now, and the Cano New Age Performers, which I needed for my Cano collection! 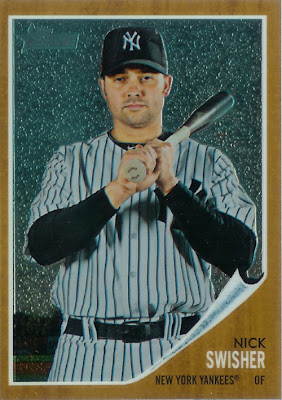 The final card in the package was a chrome card out of 2011 Heritage, numbered to 1962, of my man, Nick Swisher! I could always use a new card of Swish for my collection, and now I have the chrome and green chrome refractors of his from Heritage. I'm not sure if there are any more variations of his for this year but if there is and you have one up for trade, please let me know.
So, all in all, William, you're the best trader I've ever worked with, and one of the nicest guys not only in the community but all around, that I know! Thanks so much for everything you've done to help me out and I look forward to trading with you in the future! If you haven't seen his blog yet, please please PLEASE go read foul bunt! He would definitely appreciate any and all new readers!
Thanks again dude! See Ya!
Posted by Drew at 10:00 PM