Hey guys, Drew back here! Finals are creeping closer and closer, which is a positive, and a negative. The positive is that I'll soon have 2 free months of posting after they're over, and the negative, well of course, is that finals are coming closer and closer. Of late, my interest in the hobby has gone down quite a bit, due to school and sports and all sorts of other things. When I see cards around nowadays, I try to pass on them, but my temptation isn't really there anyways so it's easy to quickly walk by a card aisle. There is almost no variety in our hobby now so it's easy to get sidetracked and bored now. Anyways, I did manage to pick up 2 cards a little while ago on eBay, take a look: 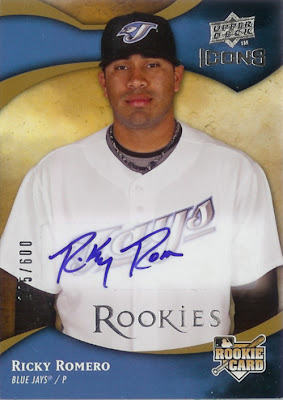 The first was a 2009 Upper Deck Icons Ricky Romero sticker autograph numbered to 600. I drafted Romero this year in one of my fantasy baseball drafts, after seeing that he could be in for a big year. He's a good young pitcher and started very hot to open the season. Since then he has cooled down a bit, but I wanted to pick up one of his certified autographs before he gets out of my price range. I'm not sure if he ever will, but it never hurts to pick one up since it only ran me a few bucks. 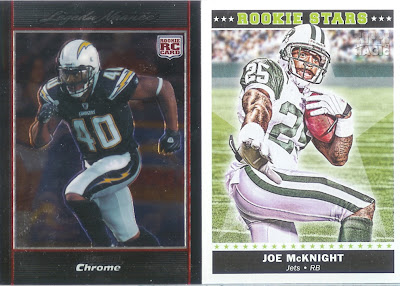 Protecting the second card I bought, were these 2 football rookie cards, one of Legedu Naanee of the Chargers, and the other of Joe McKnight of THE New York Jets! The only reason I showed these off was because I thought it was pretty cool that his "filler" card would fit into my Jets collection, even if McKnight doesn't know how to handle a football without fumbling. 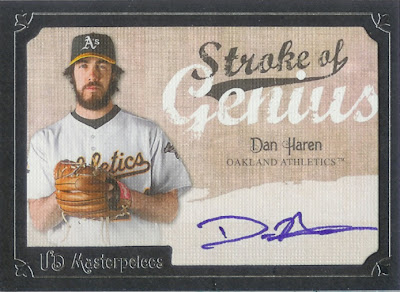 My final pickup was so worth it in my opinion. From 2007 Upper Deck Masterpieces, I got an on card autograph of now Angels pitcher Dan Haren! While many baseball fans may recognize the other Angels ace after his tremendous start this year, many people have overlooked Haren, who has been outstanding thus far into the year. He is 4-2 with a 1.87 ERA, which is a higher ERA than Jered Weaver's, and is second in the American League. Haren has always been a favorite of mine, so for under 10 bucks I couldn't hold back on clicking the bid button, and I'm happy to add it to the collection!
One thing I just noticed after researching the product, is that in the lower left hand corner, for every on card autograph in the product, they spelled Masterpieces with the 'E' before the 'I'. I don't know if anyone ever noticed this, so let me know if you have any information about why it's spelled differently on the cards than on the boxes.
All in all, for a cheap price, I added 2 more great pitchers autographs to my personal collection! Hopefully I can continue to get more in the near future, and get my interest started up again in the hobby!
See Ya!
Posted by Drew at 9:48 PM