Ruth and Gehrig Autographed Photo... What did JSA Say About My Prized Piece?

Hey guys, Drew back here. For good reason, I almost completely forgot about posting about this. Back in March when I went to the White Plains card show, I took a huge piece with me. At the shows they hold there, many authentication companies are always present, to be exact: James Spence Authentication (JSA), Global Authentics, and Autograph Certification Experts (ACE), as well as a few grading services such as Beckett. It's safe to say that they certainly are on top of things in terms of authentication.

So, back a couple of months ago, my Pop Popps bought me an awesome gift of two frames featuring all sorts of autographs, of Babe Ruth, Lou Gehrig, and Honus Wagner, as well as tickets from all throughout the early 20th century. He got them for less than $500, and we thought it is a steal of a lifetime. Here are a few pics to refresh your memory: 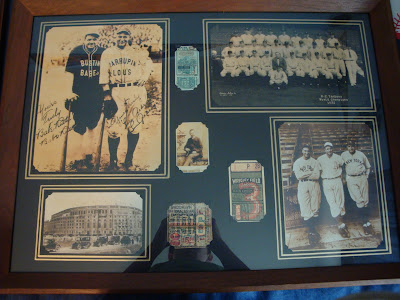 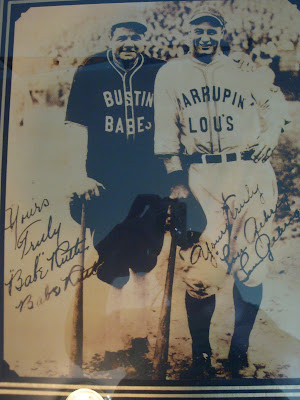 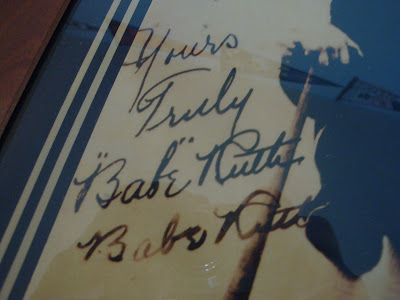 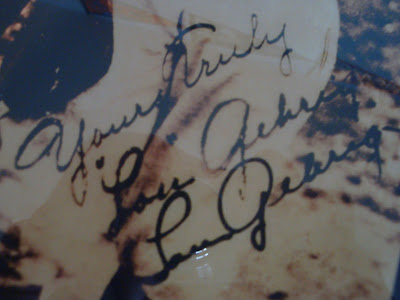 From the very start I had suspicions of whether the autographs were real. Two of the autographs were on vintage Goudey cards, and while they looked authentic, from my prior card knowledge, I knew that the Goudey cards were much bigger than the actual original size. Reprints weren't around back then, so there's no way that Ruth and Gehrig could have signed them.

But the pictures above show one particular picture, of Ruth and Gehrig posing together during their barnstorming league. On the back of the photo, it states that the photo is a copy of the autographs, but Ruth and Gehrig supposedly signed the copy to make the photo more authentic. Judging by the 2 autographs of each player on the photo, that could have possibly made some sense.

Anyway, I took the large framed photo with me to the last show, and at about noon, I brought it to the "kind" folks at JSA for them to take a look. I got an immediate response... and it wasn't so pretty. His response was "Here's my free advice, rather than you having to pay me $200 for me to tell you it's fake, its fake." Some kind of guy, gee, thanks for not having me pay $200. I tried asking him why it's not real, and showed him the back of the frame, but he wouldn't budge. Another guy was in line, so he shooed me away and pretty much ruined my day.

So, apparently, it's fake, and I'll take that, because of my prior suspicions of other parts of the frames. But the way he went about telling it really killed me. I came up exclaiming about how I love this great piece that my grandpa gave me, blah, blah, blah, and he responded with a pretty much "Get lost kid, it's not real."

But I still have my questions about it. First, what would you do with it if you were in my shoes? I personally might still hang both of the photos up in my room, even though I assume all of the items were reprints, because it looks pretty sweet nonetheless. Also, do you guys have any idea as to why this item is a fake? I have my reasons, but still, I doubt the item would be forged because the owner seemed to be a very good man.

Alright everyone, See Ya.
Posted by Drew at 9:06 PM