Revealing the Mysterious Binder... A Little at a Time... Roger Maris Edition!

Hey everyone, Drew back here with the next post in the series of revealing my mysterious binder. Just to tell you all know first, I have a heck of a lot to show you guys in the future, stuff I've been waiting to show for months now, and I just managed to send a good 8 TTM requests out in the mail. So, hopefully, once finals and regents get overwith, I can be back at it all the way! Anyways, this edition as you see already belongs to the one and only TRUE single season home run king, Mr. Roger Maris! I never thought I would be able to add so many more cool cards of him, but in every collector's lifetime they will receive a lucky opportunity to reach some goals, and I certainly did! Take a look: 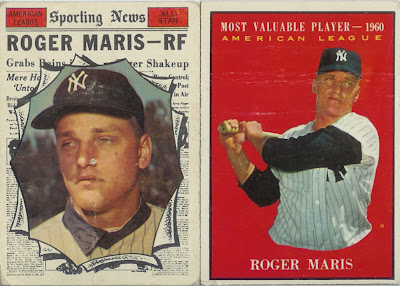 First off are two big cards in the 1961 Topps set of Maris'. When most baseball fans think of the 1961 season, hands down 99% of them will think of the show that Roger put on for them that season. Not to mention he also had won the MVP the prior season, after hitting 39 home runs and driving in 112 RBI! But, one of the greatest baseball moments occurred back on October 1st, 1961, when Maris hit his record breaking 61st home run of the season, a record only being beaten by 3 performance enhancing drug users: Mark McGwire and Sammy Sosa in 1998, and Barry Bonds in 2001. In my mind, I still call Maris the single season home run leader, but after the start by Blue Jays outfielder Jose Bautista, I'm a little scared of Maris hanging onto the throne this season.
The cards aren't in mint condition by any means, but they are certainly presentable enough that I won't need to buy a better looking card for the set. The card on the left is the only short printed card I currently own from the set, his Sporting News All Star card. All of the Sporting News cards are short prints in the set, and feature some great hitters, which means a heavy price tag. Glad to get Maris out of the way. As for the right card, also from 1961, it's his MVP card for the 1960 season. In 1961, Topps went back and gave MVP cards to players that won throughout the 50's. Maris has 4 cards in the 1961 set, and to own half of them is a pretty good start for not having to even pay! 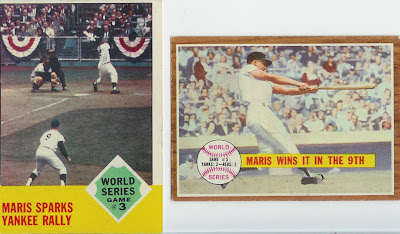 Next, were 2 Postseason highlight cards. The first on the left, is a card that Dad already had gotten for me before, a 1963 Topps "Maris Sparks Yankees Rally" card from Game 3 of the 1962 World Series. This is probably his cheapest vintage card, as many can be found for $5 or less. The second card is from 1962 Topps, highlighting a walk off home run hit by Maris in Game 3, giving the Yankees a 2-1 series lead. After Maris' record breaking year, he steadily declined, batting .259 after that season. He played through many injuries through this time, missing most of 1963 and 1965.

Speaking of 1965, the Topps card from that season is the first of the final 3 Maris cards I found in the mysterious binder! The 1965 Topps set may be my favorite Topps set of all time, and once I finish 1961, I'm hopefully going to try and do 1965 as well. This may be my favorite Maris card I've ever seen, because for some reason the pink just seemed to work for the Yankees in that year. Following that is his 1966 Topps card, which has a good size crease going across his face. Sure, it takes away from the overall appearance of the card, but it's still a pretty nice card nonetheless. Maris ended up leaving the Yankees after a brutal 1966 season, heading to the Cardinals for the final two seasons of his career. It was a last resort for Maris, and he struggled both years with St. Louis. The final card is from 1968, showing an older version of Roger, which is kind of sad and disappointing. However, Maris will always be regarded as one of the greatest Yankees of all time, even though he somehow does not have a plaque in Cooperstown.
"Roger Maris was as a good of a man and as good of a ballplayer as there ever was" - Mickey Mantle
Overall I'm extremely happy with this binder, and the awesome new additions to my Yankees collection!
See Ya!
Posted by Drew at 10:56 AM