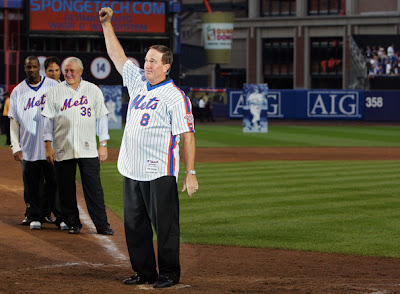 Hey everyone, Drew back here. 2011 has been an absolutely horrible year for the Hall of Fame, even though we're only 5 months in. Over the past couple of years, we've lost many legendary players such as Sparky Anderson, Robin Roberts, George Kell, Bob Feller, Duke Snider, and recently Harmon Killebrew, due to various illnesses and diseases. Immediately following the sad news about Killebrew's death from esophageal cancer, news came out about Hall of Fame catcher Gary Carter.

Carter was found to have 4 tumors on his brain, after complaining about having frequent headaches. Yesterday, after running a biopsy on him, doctors discovered that the tumors are malignant, and he's going to have a surgery at Duke University soon. He is only 57 years old, and he's going to go to chemotherapy and radiation soon, in an attempt to remove the tumors.

Sure, he wasn't a Yankees player, and he's not as big of a name as Killebrew, but anytime I hear the news of someone with a nasty disease like this, it's horrible news to me. He was the catcher for the famous 1986 Mets World Series team, and was an 11 time All Star in his 19 year career. He's considered a hero in New York, and Mets fans absolutely love him. In fact, the Mets are soon planning on honoring Carter by retiring his number 8 at Citi Field.

So, I send all my thoughts and prayers to the Carter family, best of luck with this horrible situation.