Hey guys, Drew back here! Yesterday, I received my 66th ever TTM success, just following Friday the 13th. It had to figure that considering those 2 evil numbers were involved, that the success was a bit unexpected! Right? Take a look: 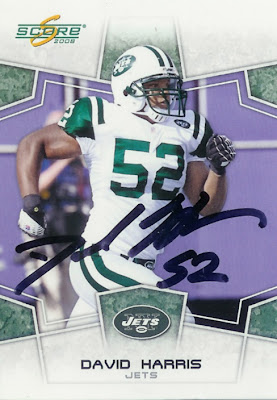 None other than New York Jets linebacker David Harris signed 2 cards for me! I sent these cards back in August 2010, and had basically written them off from ever returning to me again, but that is the fun part of doing TTM requests, because you never know what you'll get and when you'll get it. Harris is a favorite of my dad and I's on the current Jets team, because while he's often outspoken and isn't as popular as Revis or Bart Scott, he always seems to come through in the clutch. He's a heck of a tackler, ranking often in the Top 50 most tackles per year. Last postseason, he led all NFL players in tackles with 30 in 3 games. 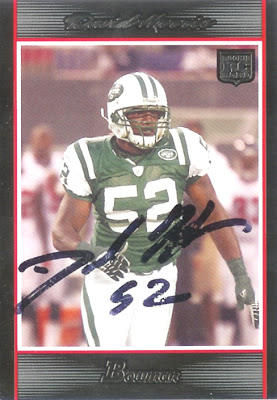 I never really saw this coming, but, it's better late than never! He signed a 2007 Bowman rookie card as well as a 2008 Score card. I regret not making him a custom card to sign but these look very nice so it's ok. The Bowman rookie card got smudged a little bit, but it still looks sweet!
I hope to get some more letters out there and circulating so I can add to my autograph collection, and fast! Thanks Mr. Harris, and See Ya
Posted by Drew at 3:41 PM