Hey everyone, Drew back here. So, I haven't gotten around to sharing much lately, and I have a lot to share. But I figured I'd hold off on some of that for just a little longer to just talk about one some of the awesome things that have happened since I made the JV baseball team. My team started off hot, winning our first two games and showing glimpses of our past great years, but then, we dropped 3 games in a row, including a loss to one of the most arrogant and obnoxious teams I've ever played in my life. However, we managed to win in a scrimmage and in a way turned it around a bit.

After that scrimmage, there was a cool young guy there to talk to us. He gathered us around and told us about an opportunity to write in the town paper! For a while, after getting accustomed to blogging and beginning to love to write, I've looked forward to an opportunity like that, and I couldn't let it go to waste. Sure enough, I contacted this guy, and got underway in writing for the local paper! I mainly have had to cover how the JV team is doing so far, but I have also told him I have interest in covering other sports. I got my first piece done, it was edited, and on April 20th, I ran over to the town market to see my name published in the paper, and it was a thrill! Here is a scan of my article (I crossed off the names just for privacy's sake):

Feel free to click on the picture to see it closer up! The following week I shared an article with my friend Mike, and our names both made the paper. This week, I'm giving up my opportunity for a friend of mine to step in and try it since he was interested.
Anyway, today was the day of our school baseball tournament! Four local teams traveled to one place to play a quick double elimination tournament, consisting of 4 total games, 2 played by each team. In our first game, we got our butts kicked, a solid 12-0, but I received a great opportunity. Due to the lack of hustle by one of our players, I came in to play 3rd base towards the end of the game! So far in the season, I had only had 2 at bats, consisting of a single and a hit by pitch. I got one at bat at the end of the game, and I crushed one our only hits of the game for a late game single. I also made a nice play at 3rd, but it didn't matter to the team, as we ended up losing.
Due to many player's lack of confidence and a good attitude, most of our bench players got a chance to play in Game 2! One of them being myself, as I got my first start ever in JV baseball! In a high scoring slugfest, I ended up helping to lead the team to victory, along with the help of our starting pitcher, who went the distance even though a bunt deflection hit him in the eye while he was batting. Personally, I was 2 for 2 with 2 line drive singles into right field, as well as 2 walks, 3 runs scored, and 2 RBI. The game had to go in my Top 5 best games of my life, and it was an incredible day for me! It got better though, when Coach gave me this: 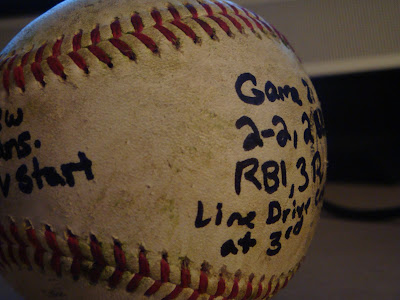 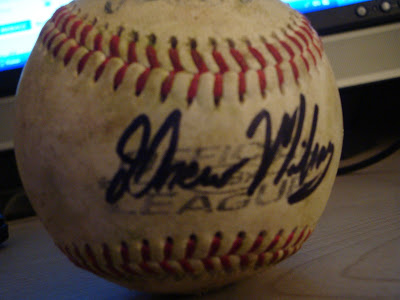 Yep, I got the game ball! I wrote all over it at this point just for a momento, including my awesome signature, and it'll look awesome sitting in my room! I didn't really do this post to show off, I just feel really proud of myself, and I figured I'd spill it all out here. So far in 7 at bats for school, I have reached base in some way all 7 times! While it's a streak that will be extremely hard to continue, it really goes to show once again, that persevering pays off!
Do you remember any Little League/High School games where you couldn't do any wrong? I've had a few games like this in town ball, but for school, I couldn't be any happier right now.
See Ya!
Posted by Drew at 8:24 PM