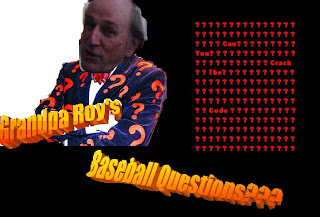 Hey guys, Drew back here with another Grandpa Roy question! Here it is:
Last night, Albert Pujols hit a grand slam in the 10th inning, and it eventually won the game. That gives 5 grand slams this season, tying the National League record. The Major League Record is 6 in one season, held by 2 players. Who are they and what seasons did they do it in? Also, who did Pujols tie for the National League record?

Every time he calls and asks me one, I will ask the fans. Now, please only name 1 or 2 unless we desperately need help, because people check the blogs at different times each day. At the end of the year, whoever has the highest percentage of naming a correct player will get a prize. So, again, 1 or 2 names if you know it, no cheating, and please give everyone a try. The answers will be posted tomorrow. Thanks, Drew

Good job guys, you got them all!