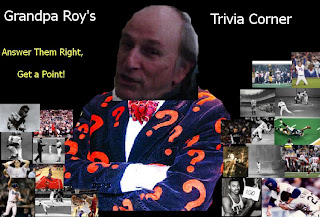 Hey guys, Drew back here, with the results of the latest Grandpa Roy Question. Only 3 comments by you fans and all 3 were incorrect. So this question I guess isn't about the contest but is about just trivia in its sake. Here are the questions again:

Since it is the Little League Baseball time of the year, we figured you may be interested in a little league question. Who was the 1st Little Leaguer ever to play in the Major Leagues?

As well as being the 1st little leaguer to play in the major leagues, Joey was one of the 1st bonus baby players in the Major Leagues after receiving a $20,000 contract with the Braves.

Who was the 1st Little Leaguer to be enshrined into Cooperstown?

So there you have it! No points go to anyone this round, so next question will be interesting. See Ya!