So, I got some mail from a guy on blowout forums, and it's nice! We made a really fast trade, I traded him a 2008 Topps Allen & Ginter Brian McCann Jersey card for this: 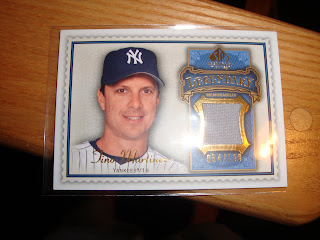 2009 UD SP Legendary Cuts Tino Martinez Relic #ed/100
Since Upper Deck has been in the news lately, I wanted to say that this has been one of the best releases so far this year. Now that next year they are like last year's Donruss, I don't know what to say. Maybe go back to Legends in hmmmm you know, LEGENDARY CUTS! Or be like Tristar, show so much interest in the hobby: Anyway, thanks for the trade dude, and see you guys later!
Posted by Drew at 9:07 AM