The Conclusion of Pinstripe Pandemonium

Hey guys, Drew back here! I spent my Friday night at Madison Square Garden seeing Jack White with my Dad, and let me just say that he's as talented as it gets. In today's era of music, he is still keeping old fashioned rock and roll alive, and he does a phenomenal job live. If you guys want to hear last night's show, click here! Pandora is playing the show repeatedly over the next few days, which is a pretty unique idea; as Jack seems to be full of those. It's safe to say I'll be adding his 2015 Topps card to my collection as soon as possible.

Anyway, getting back to the conclusion of another amazing day. I originally had arrangements to meet Ron Guidry, and he apparently cancelled far prior to the actual show. Same with Reggie Jackson. I'm not quite sure what the deal was with that, because there was absolutely nothing on MAB's website to suggest that they wouldn't be appearing. However, I did decide to get one more guy on my picture before I wrapped it up for the day. 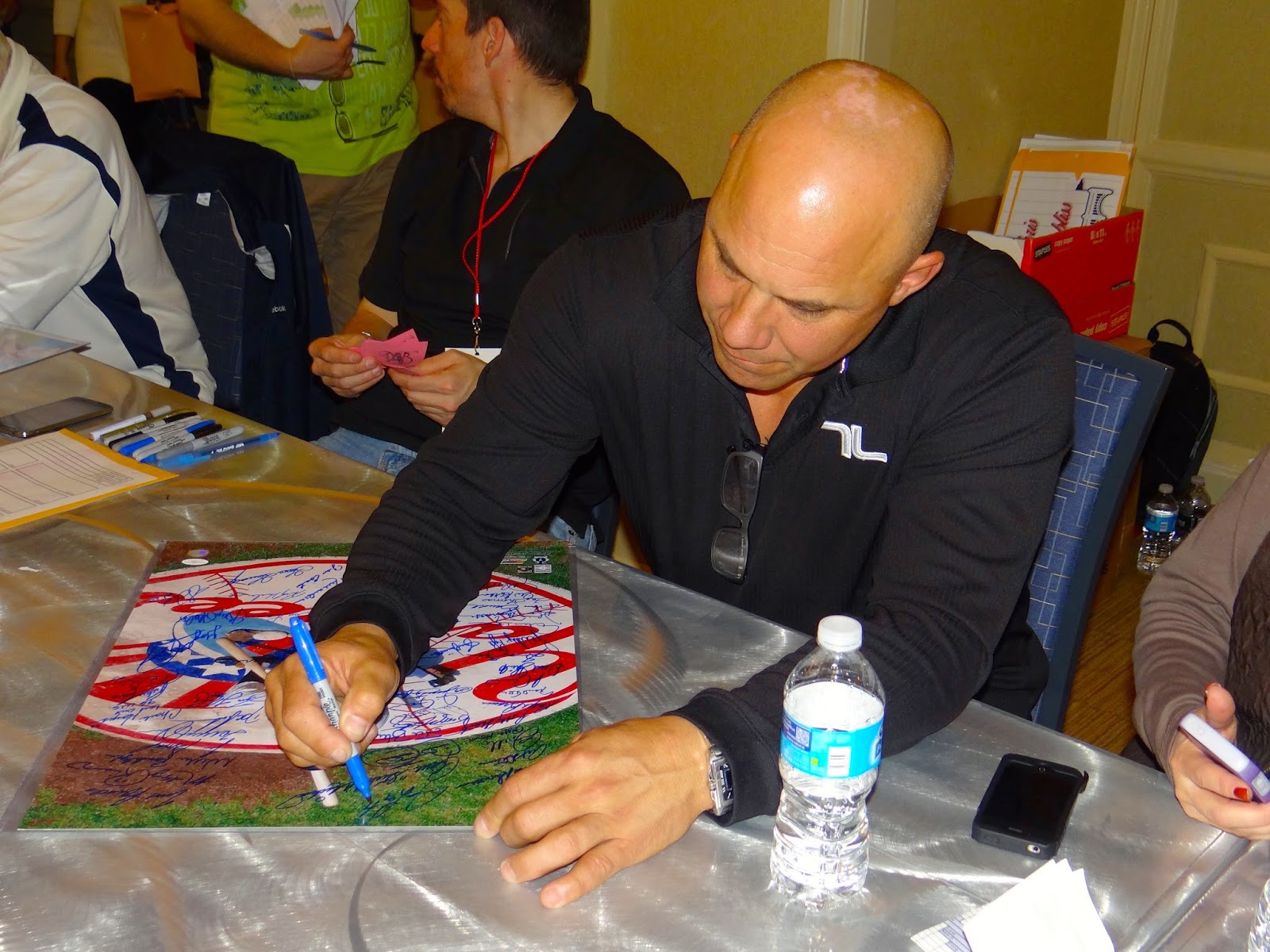 Former Yankee hero Jim Leyritz became the 56th name on my Mickey Mantle photo last Sunday! We already met Leyritz at MLB Fanfest about a year and a half ago, and we were both impressed by how nice he was. He has had a lot of legal troubles over the past few years, but it appears that he's gotten everything together. 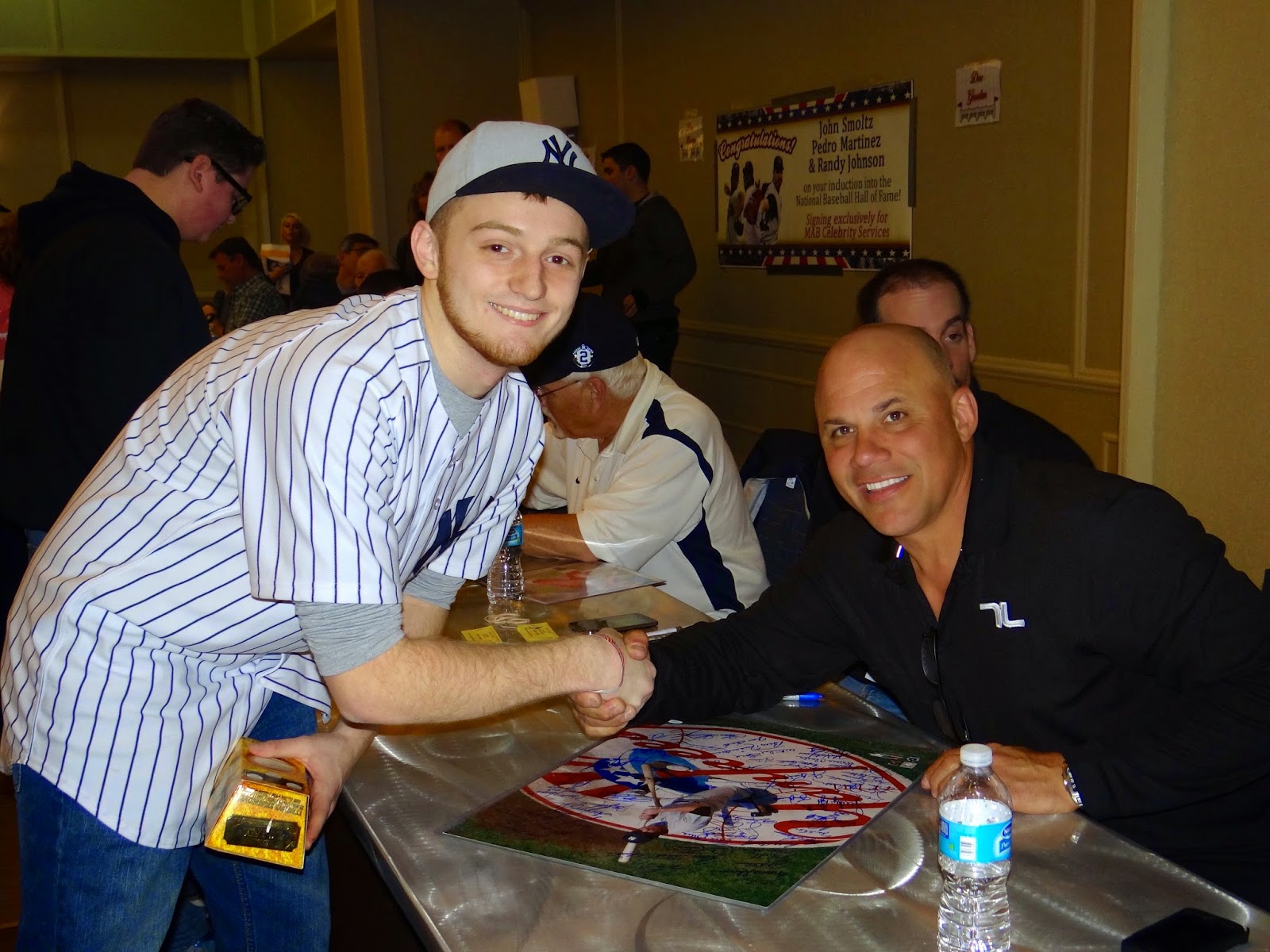 Leyritz was no different from the first experience we had with him; very friendly. I had him sign my picture towards the top of the left side, a part in which I didn't believe I'd add to. It came out great, I think. 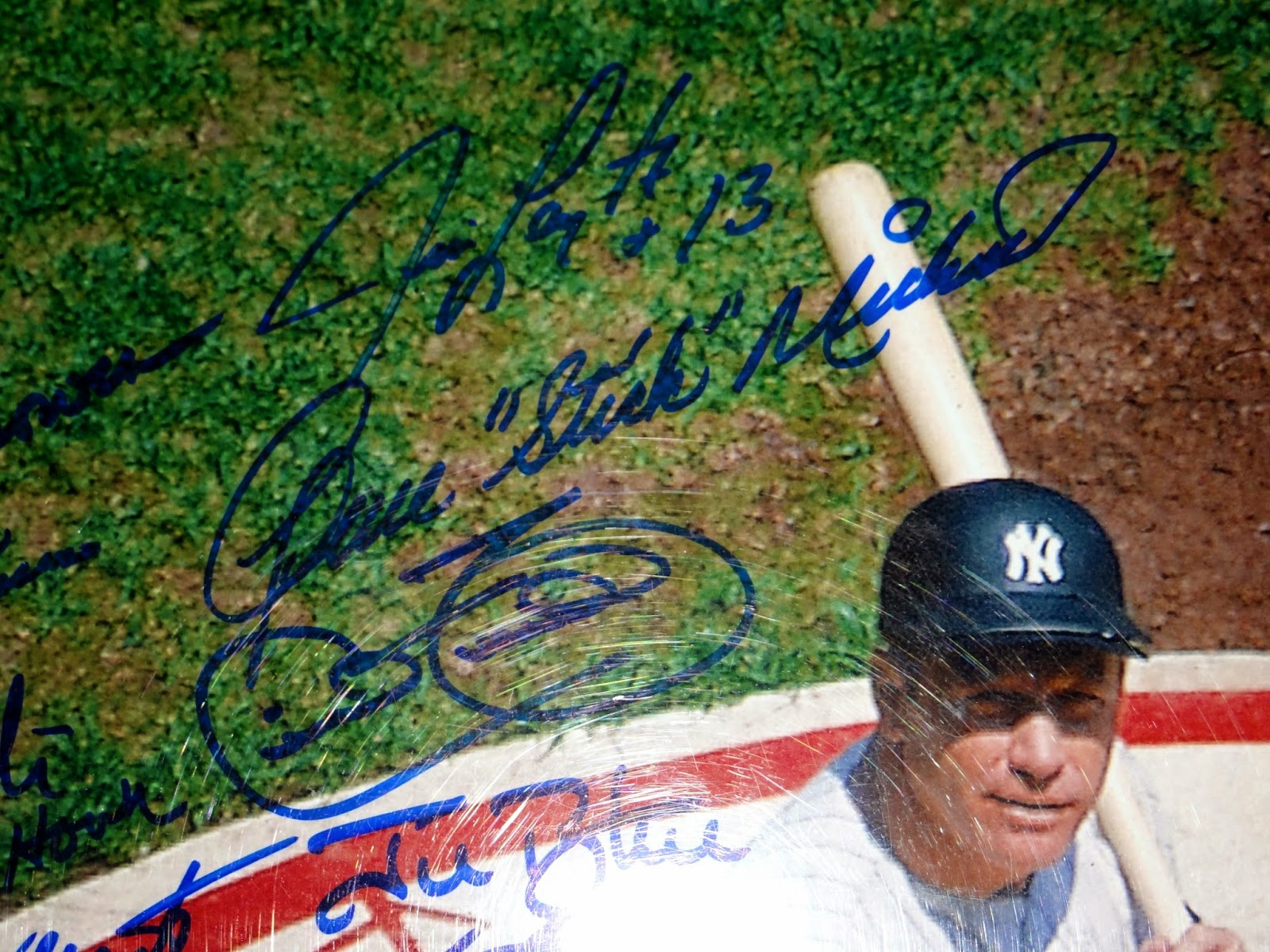 The ink looks a little dry on his signature, but I think that's because of the area he signed it. He has a beautiful autograph though, and I'm proud to add the guy who made a name for himself hitting home runs in key moments for the Yankees in their late '90's dynasty.

And now... here is the updated full Mickey Mantle picture: 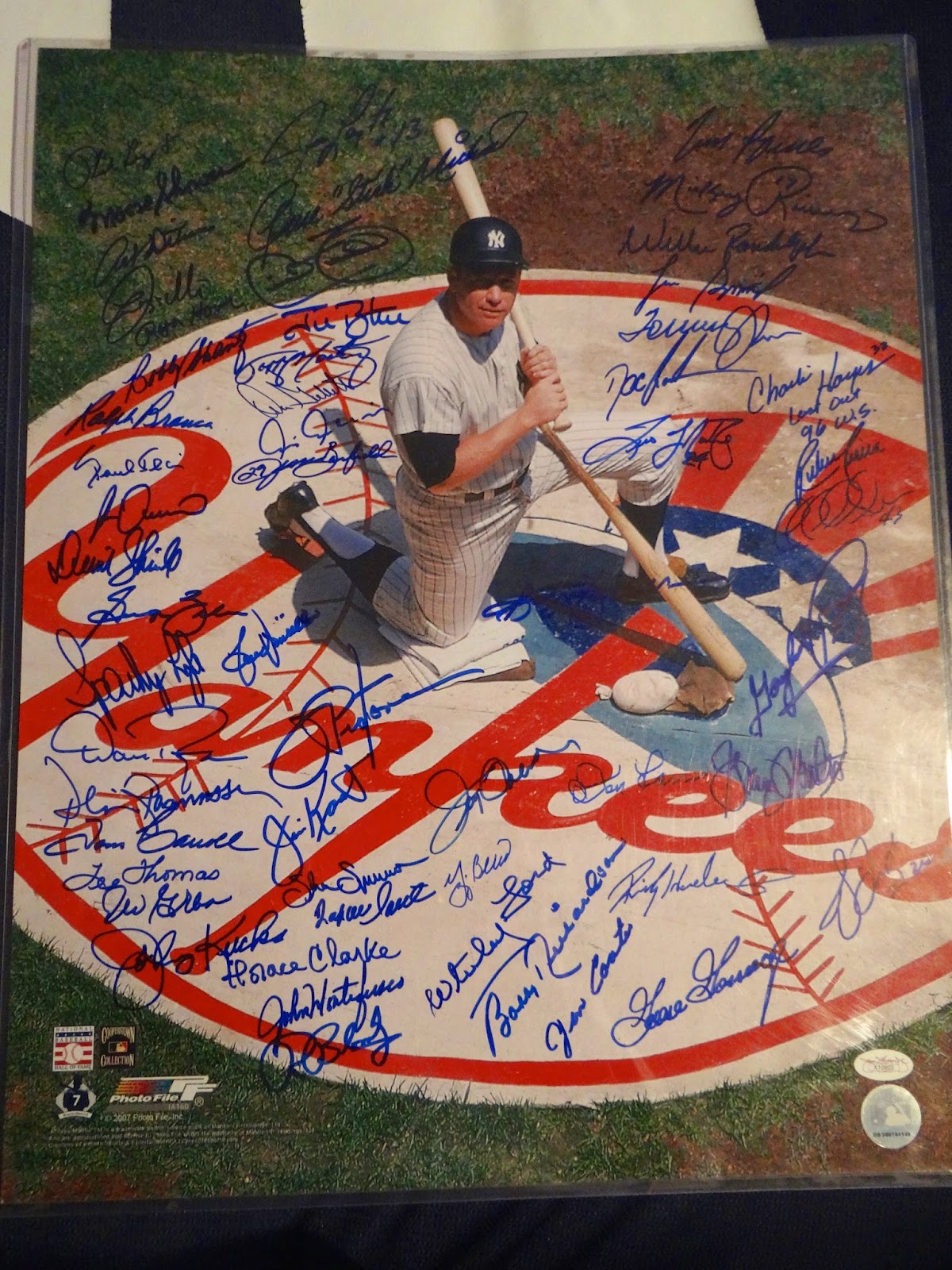 As you can see, there isn't much room left. I'm going to attempt to add 4 or 5 more signatures on it, but I'm not quite sure how just yet. From here on, I'm going to only add star names to the photo; such as Don Mattingly, Dave Winfield, Ron Guidry, or possibly Paul O'Neill. I have some ideas as to how to finish off the project, but I've got some time to sort it all out. I'm surprised how much I've been able to add in such a small portion of time, but then again, it hasn't been cheap. I'm not even going to try to add up each cost, but when it's all said and done it'll be my prized possession, and it'll all be worth every penny.

We finished our day by getting to meet Lee Smith for the third time in a few years. We didn't have any intentions of getting a ticket for him after already adding multiple autographs of his over the years (including on the picture above). But we were supposed to get a free autograph ticket for Charlie Hayes alongside our Tino Martinez ticket, and Hayes missed his flight that morning and didn't make the show. They reciprocated us with a free Smith ticket, and we decided to make good use of it, although we had to wait another hour for him. 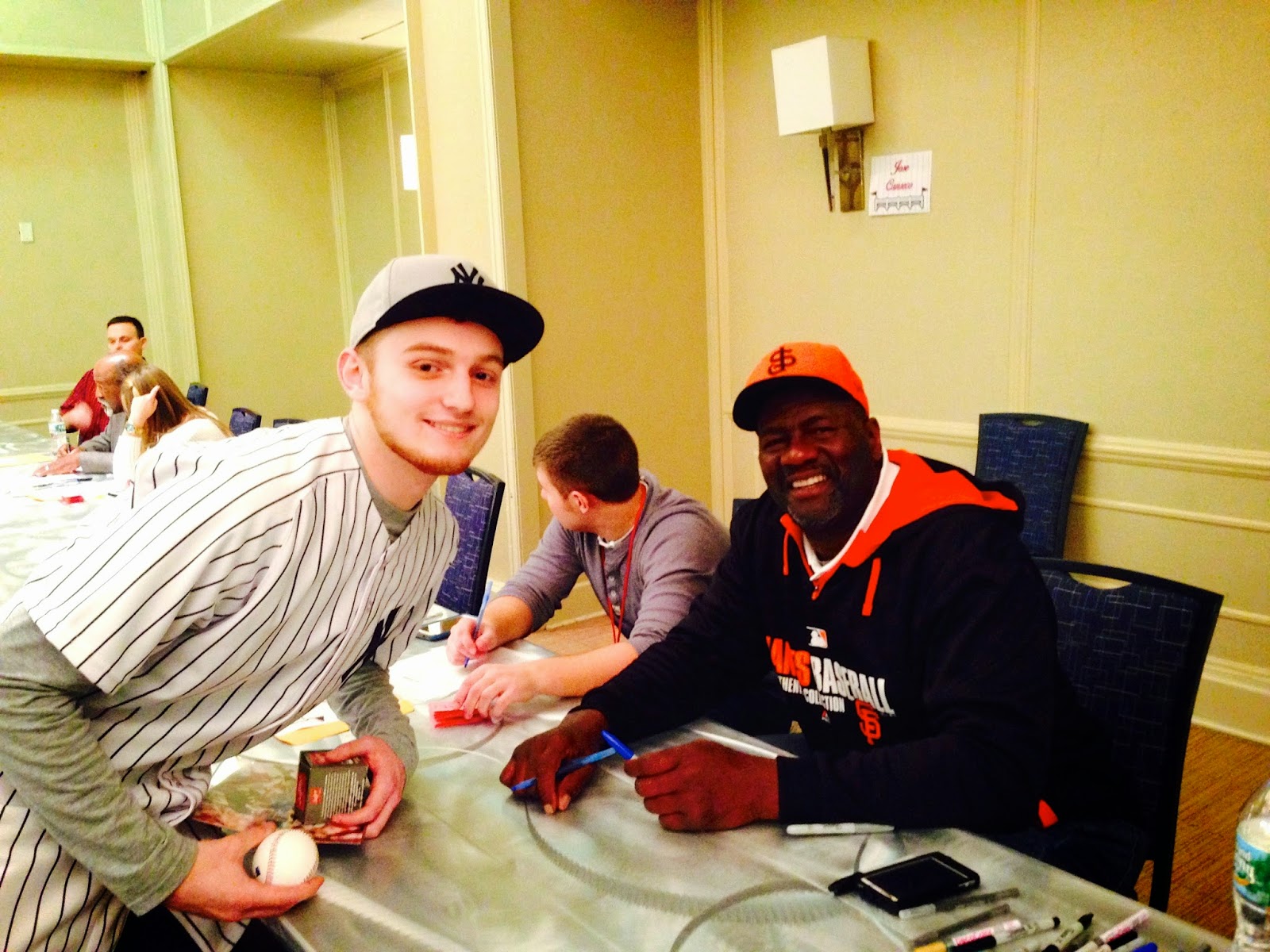 Mr. Smith was great as always with us, and he made the autograph worth the wait. 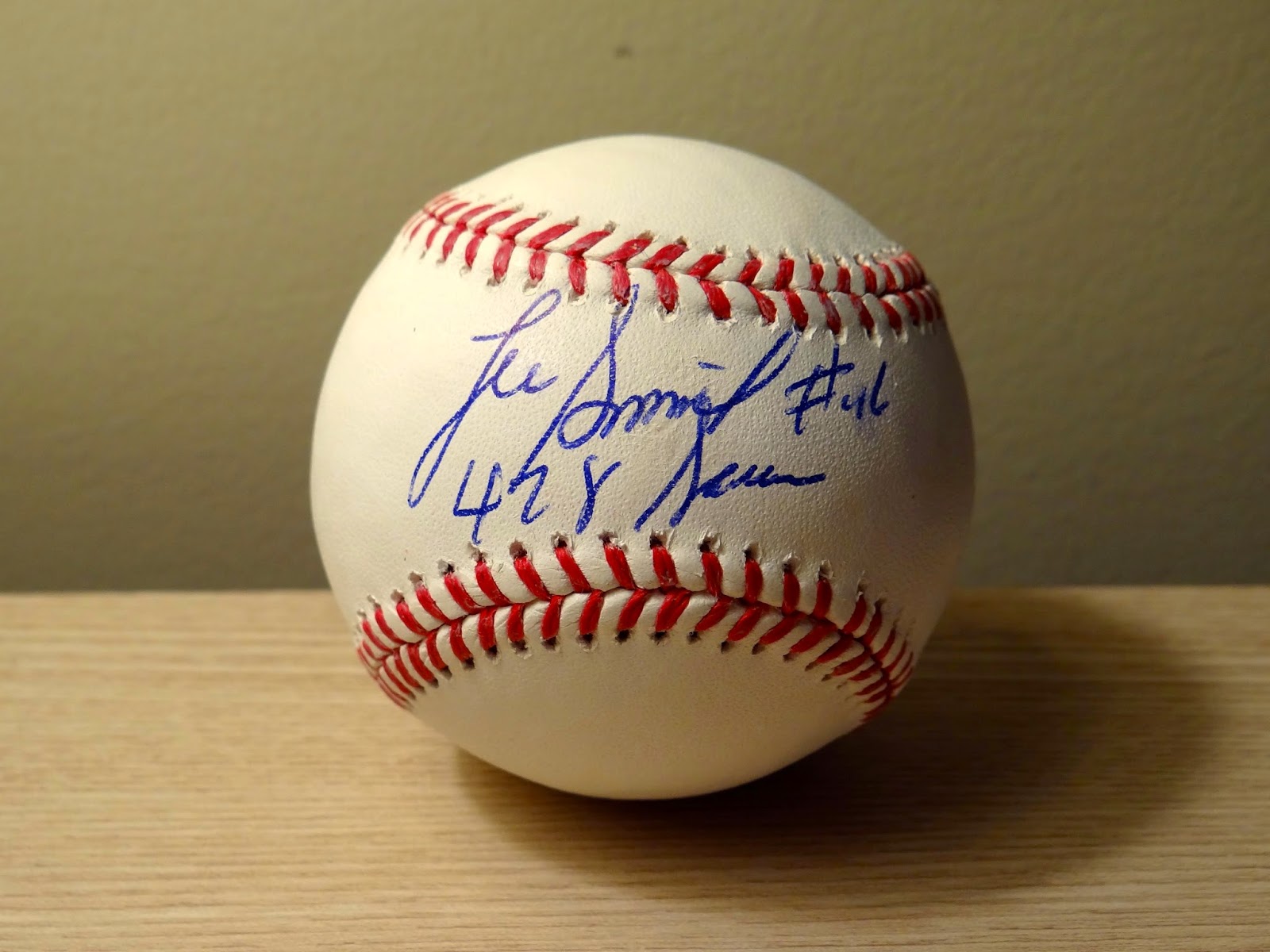 We got a baseball at the show to have signed, and Smith inscribed his number and save total for free. It looks great in person, and while he is just on the cusp of being in my new Hall of Fame display, I have plenty of great places to display it. I don't need a whole lot else of Smith's from here on, but I really hope he can find a way into the Hall. Maybe he doesn't have the legacy of some players, but he is right there in my opinion with Goose Gossage, Bruce Sutter, and others of his era. 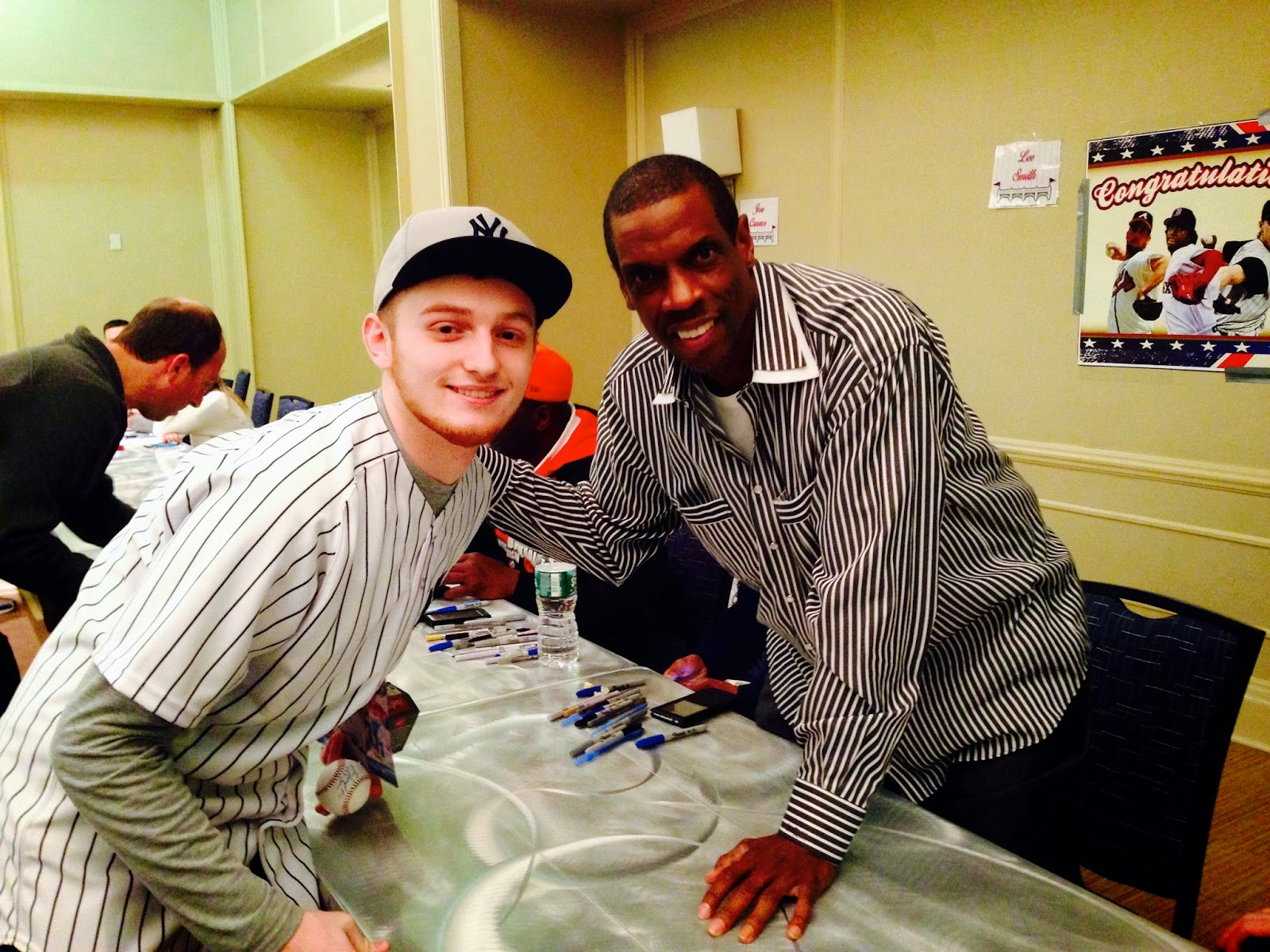 Doc Gooden was signing next to Smith, but as we walked by my Dad called him out and thanked him for all the wonderful experiences he's given us in the past when we've met him. He appreciated the compliment, and I was actually able to get a quick picture with him. Awesome.

I have a few more quick items to display from the show, but that was it as far as meeting the players went. It was an amazing day, and I'm really lucky to be able to share so many special days with my dad. I also got to meet Frankie of My Life in the Sports Card Hobby. Please, everyone do yourselves a favor and check it out if you haven't already. He's a smart young kid with a ton of promise in our hobby, and he's only in 7th grade! The emotion and passion he puts into his posts makes him seem much more mature and older, and it was great meeting him and his mother.

Thank you to everyone that helped make last Sunday so special! See Ya!
Posted by Drew at 12:02 PM