Autograph of a Star-Lord!

Hey guys, Drew back here! Today was easily one of my best hobby related days in a while. My dad and I attended MAB Celebrity's Pinstripe Pandemonium autograph show in Hasbrouck Heights, New Jersey, and I came home with a nice group of autographs and pictures! I will have plenty to share over the next few weeks to showcase this memorable day, but we're going to start on a bit of a fun note. Along with the autographs I obtained in person, I also bought a few signed items some of the vendors had for sale. The second I saw this signed 8x10, I knew I had to add it to my collection. 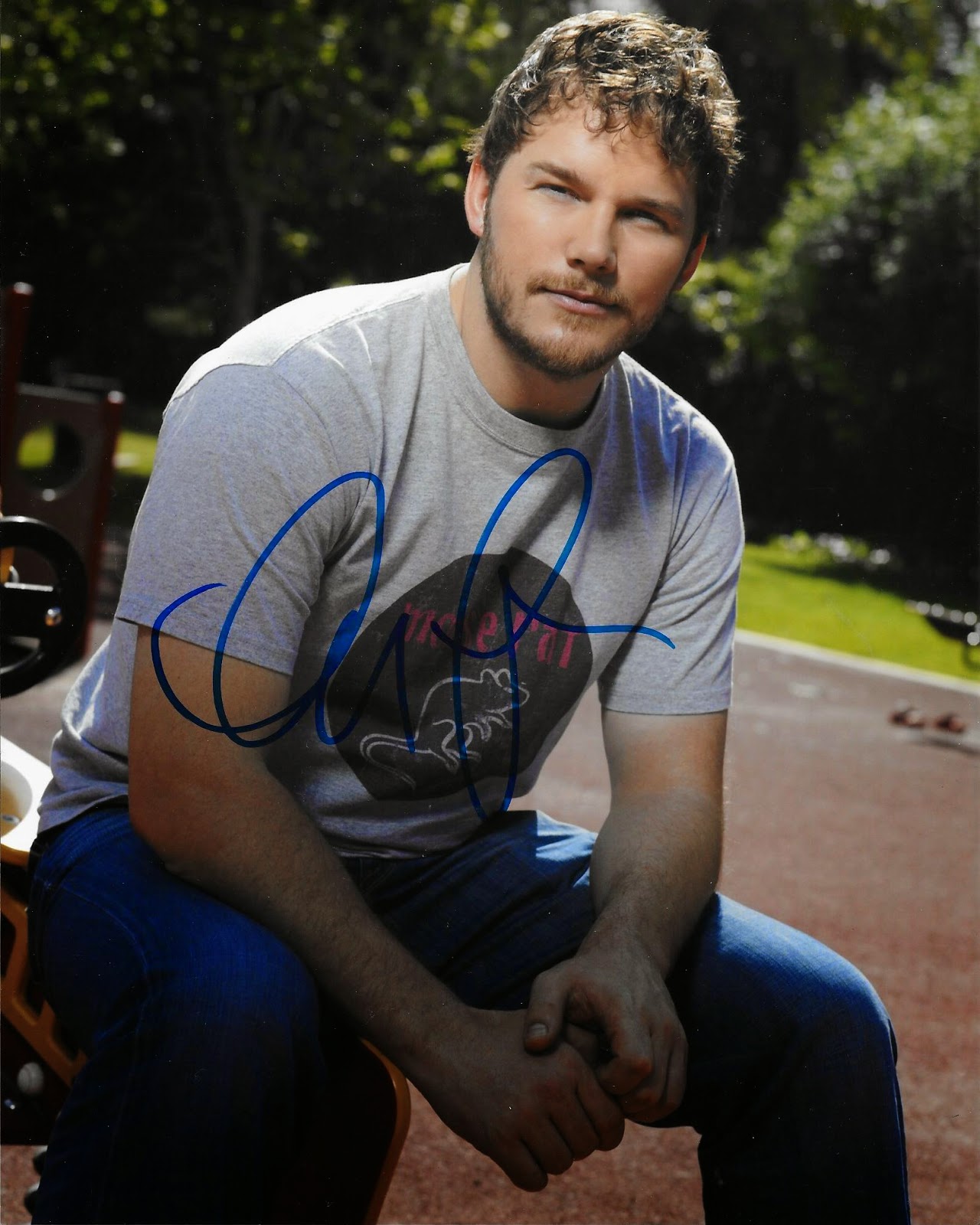 None other than Parks & Recreation and Guardians of the Galaxy star Chris Pratt! Pratt has been perhaps the breakout actor of 2014 with his role in Galaxy as Peter Quill aka Star-lord, however it was his performance as Andy Dwyer in Parks that really made me a fan of his. My girlfriend Victoria and I watched it all summer together, as I mentioned recently when I showcased my Nick Offerman TTM autograph. It became one of my favorite comedy shows, and it serves as a nice bridge show between crazy horrors and dramas.

Everything I've seen of Chris Pratt has been positive, as I've heard many who can vouch for saying he's a great guy. When recently asked if his rise to stardom tempted him to leave Parks & Rec before their final season, he replied "I would never f------ leave this show. I've been doing this business for 15 years. I realize that the things that really matter are the relationships you have while you're doing them. I could hope that I could have the good fortune of finding another group of people like this, but I don't expect I ever will." It's awfully nice to hear things like this in Hollywood, where these kinds of stories don't usually show themselves in public.

I bought this off of a dealer who exclusively sold celebrity autographs. He told me he worked in the same building as Sirius XM Radio, and he often comes across stars and is able to get all sorts of autographs. The picture is not certified, but the guy had an absolutely enormous stock of signed photos, and I believe in the good of mankind and that he wouldn't be a complete scammer. The picture is of Pratt wearing a "Mouserat" shirt, the name of his fictional Parks & Rec band, and is signed in blue sharpie.

Again, if you haven't checked out Parks & Recreation, I highly recommend it. Between Offerman, Pratt, Amy Poehler, and numerous other great actors, it's one of the best shows on television.

Fun fact on Pratt: He played Scott Hatteberg in Moneyball!

More to come from the Pinstripe Pandemonium! See Ya!
Posted by Drew at 10:16 PM