Hey guys, Drew back here! So, this week I've done nothing but work at a baseball camp, which has led to my absence. Fortunately though, I finished my one and only week being a CIT for the summer, and I'm back to deliver to you all the latest in my card collection! Before I began camp, I decided to send a bunch of TTM's out to some guys I haven't gotten yet. The batch was evenly divided with new and old players, because I like them all, simply put. Yesterday, two of them came back, only taking 7 days, and boy was I content with the results! Take a look: 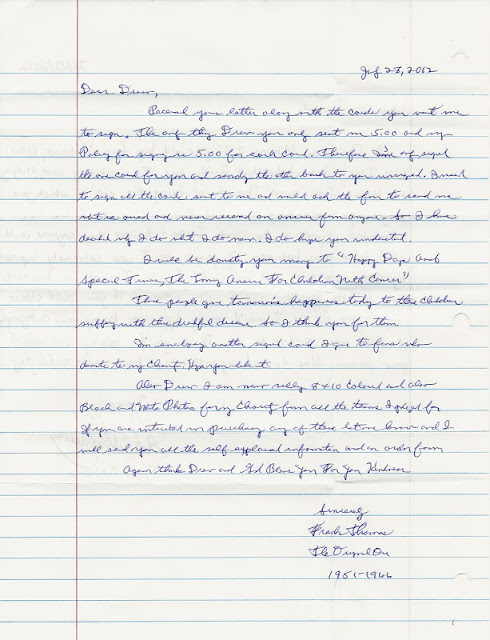 Received your letter along with the cards you sent me to sign. The only thing Drew you only sent me $5 and my policy for signing is $5 for each card. Therefore I only signed the one card for you and sent the other back to you unsigned. (some sentences I can't read) (something about doing what he has to do) I do hope you understand.

I will be donating your money to "Happy Days and Special Times, The Loving Answer for Children with Cancer". Those people give tomorrow's happiness today to the children suffering with the dreadful disease. (not sure on the last sentence again)

I'm enclosing another signed card I give to fans who donate to my charity. Hope you like it.

Also Drew I am now selling 8x10 colored and also Black and White photos for my charity (not sure). If you are interested in purchasing any of these let me know and I will send you all the self explained information and an order form.

Again thanks Drew and God Bless You for Your Kindness. 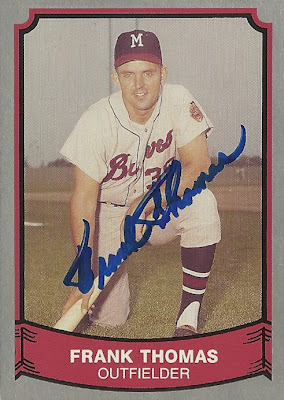 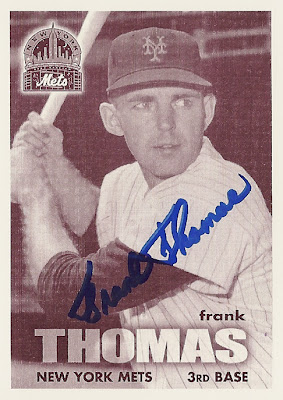 I have to say I was astounded when I opened the envelope to find a letter from "the Original" Frank Thomas, who swatted 286 home runs in his 15 year career throughout the 1950's and 60's! Despite him not being able to sign the other card and index cards I sent him, it really meant a lot that he wrote out a full letter explaining why he couldn't, although I couldn't decipher his handwriting at times. I don't know if I'll be buying any additional items from Mr. Thomas, but the gestures were very nice and I'm glad he puts the money towards a good cause.

As I mentioned, Thomas played 15 seasons in the big leagues for a whole lot of teams, but his biggest career stint took place between 1951 and 1958 with the Pittsburgh Pirates. Those teams weren't all that good, however during his prime he managed to hit 20 home runs or more in 9 of 10 seasons! He made 3 All Star teams and also placed 4th in MVP voting in 1958, after he had perhaps his best season of his career. 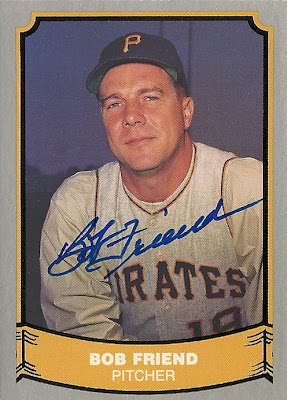 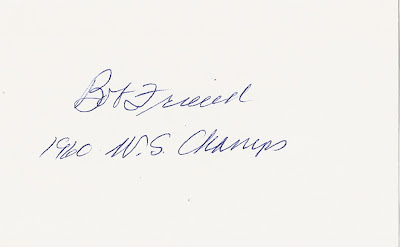 The other success I received didn't contain as much writing, but I was still more than content with the result! Former Pirates pitcher Bob Friend signed a 1988 Pacific card as well as an index card for me! Friend was a very underrated pitcher, mainly due to the fact that he pitched for a lot of mediocre Pirates teams during his career. However, as you can see on the inscription on the index card, he did finally get his chance to help his team get into the spotlight, as Pittsburgh rose to the top over my Yankees in the 1960 World Series. Overall, the 4 time All Star certainly deserved better than a career winning percentage well below .500, but sometimes you can't really control where your career will take place. Unless Felix Hernandez can escape Seattle, his career numbers could turn out similar to someone like Friend, where, well, they should look a lot better.

So if you guys haven't gotten an opportunity to send to these guys yet, I strongly recommend that you do. Both of these men were definitely under the radar their whole careers, as well as true class acts, as you can see with how well they treated my autograph requests! Thank you to both Mr. Thomas & Mr. Friend!