Hey guys, Drew back here, with the 4th and final installment of my little card show series. Finally, after waiting almost an entire week, I got my hands on my pictures that were taken at the show, and I was pretty impressed with how they came out. It must have been a nerve-wracking experience for photographers back in the day when they couldn't view what they just took, so I guess I learned a pretty valuable lesson: never leave the camera home! With that said, let's finish this review out strong; here are the players I was fortunate enough to meet last Saturday! 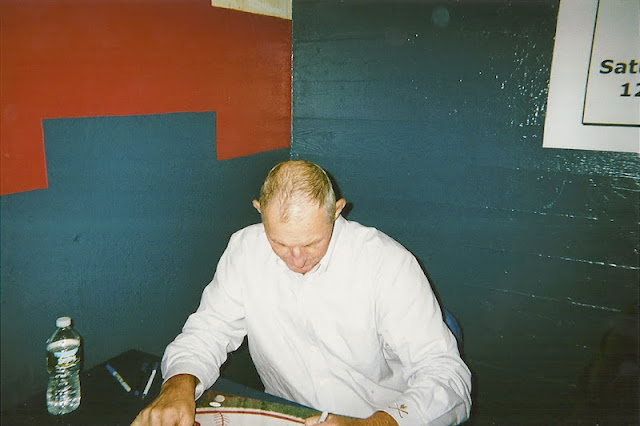 The first former player I met was former Twins pitcher (among other teams) Jim Kaat! Kaat is a pretty well known name around baseball, given his 25 year career spanning the 50's, 60's, 70's, and 80's, as well as being a broadcaster basically from his retirement on. He made 3 All Star teams in his long career, but easily the most impressive statistic on his resume is his 16 gold gloves; the most by any pitcher in MLB history! "Kitty" Kaat retired with 283 wins and 237 losses, with an ERA of 3.45.

A lot of people have talked about whether he should be in the Hall of Fame or not. Personally, while he was a very nice man, and I've always enjoyed listening to his broadcasts, I don't believe his statistics were dominant enough to put him in. He was a very good pitcher, but until Jack Morris gets in, I don't see Kaat getting in. 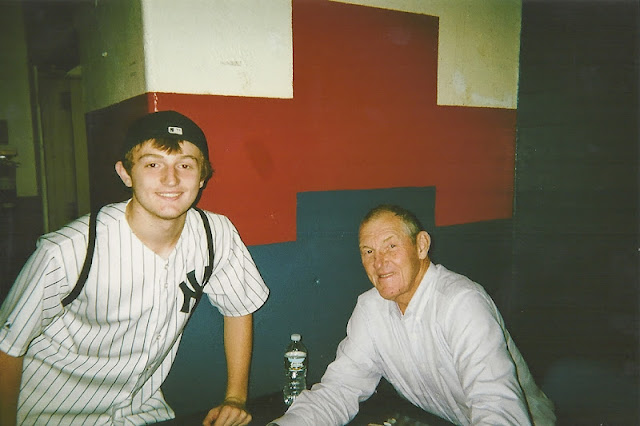 He was a pretty nice guy though, even though he didn't really say a whole lot. I told him how I enjoy listening to his broadcasts, and he said he appreciated it, but besides that, not much else was said. I'm still very glad I took the opportunity to meet one of the few lifelong baseball men still around. 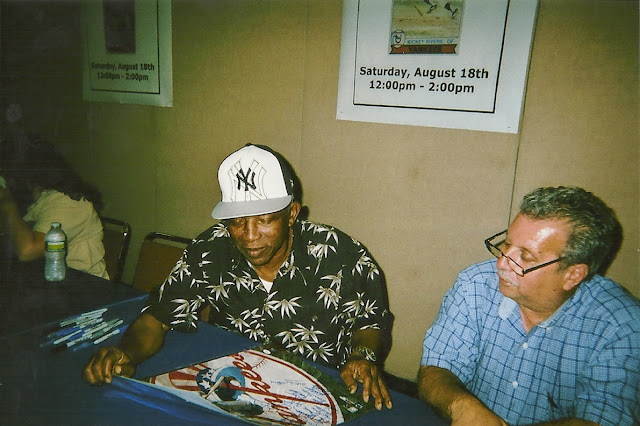 Next, we met perhaps the greatest entertainer to ever put on the pinstripes, Mickey Rivers! I always loved hearing stories about Mickey through his Yankee days, like when he'd jump on the bullpen car begging the team not to bring in a certain pitcher, or starting plays in a runners position! He had a pretty solid career, and was a key contributor to the Yankees two World Series wins in 1977 and 1978.

Rivers seemed to love the heck out of my signed Mickey Mantle photo, reading off all of the autographs and trying to identify who some of them were. A few players, Ron Blomberg in particular, made Mickey start cracking up, for reasons we're not all that sure. 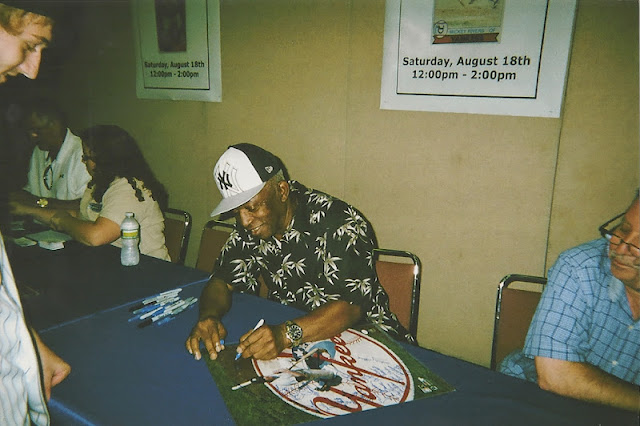 Finally, after he started to get bored reading off all of the autographs, he asked me where I wanted his signature, and I told him to put it anywhere. He ended up starting the right side of the picture with a nice, large autograph with his number 17! 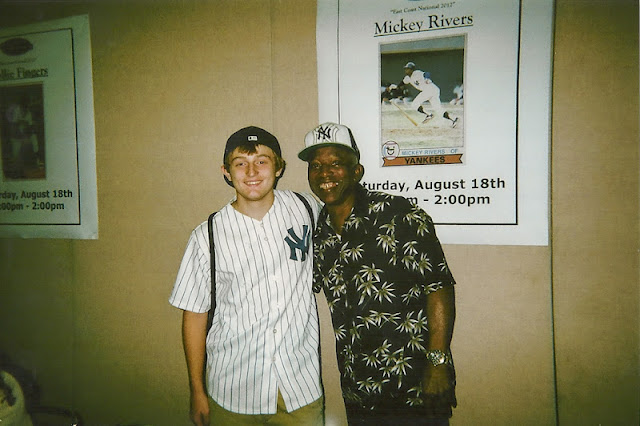 Mickey seems to love these autograph signings, with his big smile sticking out like a sore thumb throughout the show! He made it a really fun experience, and I can easily say he was one of the coolest players I've ever met, along with Ozzie Smith and Ernie Banks! 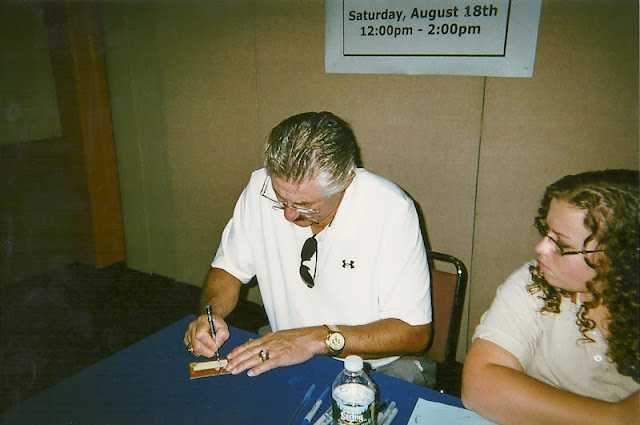 After Mickey, Dad and I jumped on the next line to meet the man behind the most legendary moustache in sports history, Rollie Fingers! Fingers was the 9th member of the Hall of Fame that I've gotten to meet, and it was a neat experience due to how influential he was towards the closer role in baseball that is a huge thing today! He pitched 17 seasons with the A's, Padres, and Brewers; making 7 All Star teams, winning 3 World Series, and his 1981 season earned him not only the Cy Young award, but the MVP as well! 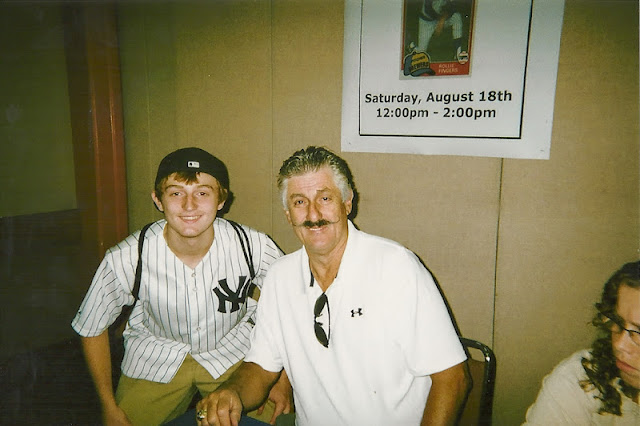 Rollie also wasn't the most open players I've met, but I told him how I made the custom card in his honor and he said it was pretty nice and he appreciated it. And, well, the moustache still is very much in tact, and it was an amazing sight to see, being a facial hair enthusiast! 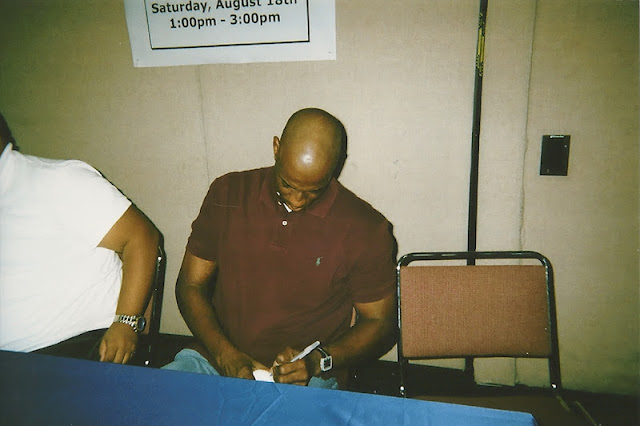 Next was yet another borderline Hall of Famer, former first baseman Fred McGriff! I always had a lot of respect for McGriff, and I was thrilled when the "Crime Dog" was added to the lineup. I don't really know why, because I hardly know anything about him, but he just seems like a class act, and since there aren't any suspicions of him using PED's, it makes things a lot easier. Honestly, when you look at it, through that 1990's era, the best natural sluggers wound up being Jim Thome, Ken Griffey Jr, Frank Thomas, and Fred McGriff! He was only 7 home runs shy of 500 on his career, which was disappointing for him I'm sure, but it was a great career without a doubt. 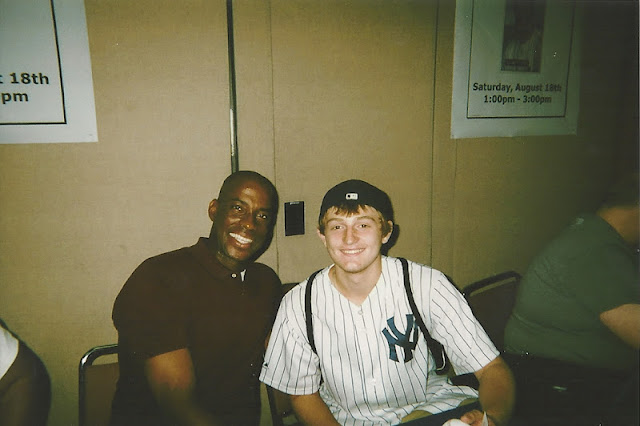 I didn't have a whole lot to say other than what I wanted as an inscription, because I couldn't really think of much to say. He seemed like a pretty nice, humble guy though, which was nice. 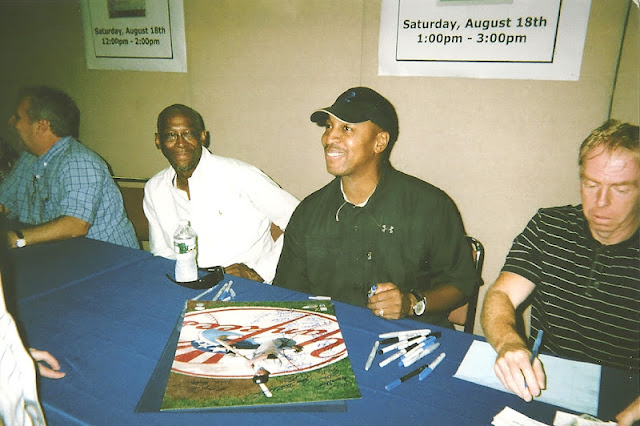 Former Yankees second baseman Willie Randolph was our next signer! I needed a little bit of money help to get an autograph ticket for him, and Dad obliged, which I really appreciated! We split the cost of the autograph ticket, which I've gone on record to say is a bit ridiculous for a player of his caliber. But then, after a big birthday turnout, and the thought of only having one chance to meet him, I decided to go for him as well. While Willie played for multiple teams during his career, he'll forever be known as a Yankee.

The day before the show, I happened to be watching the final game at the old Yankee Stadium, which I had recorded back in 2008 onto a tape. When Randolph was announced during the player introductions, he took a slide into second base, so I had to commend him on his slide when I met him. He told me he ended up hurting his knee for about 3 weeks after that slide, but it was worth it because unlike the players who collected dirt into little holders, he went home with the dirt on his uniform, which he plans to hang up and frame in his house. I'm glad I remembered to bring that up when I got to talk to him, and he seemed like a really personable, nice guy. 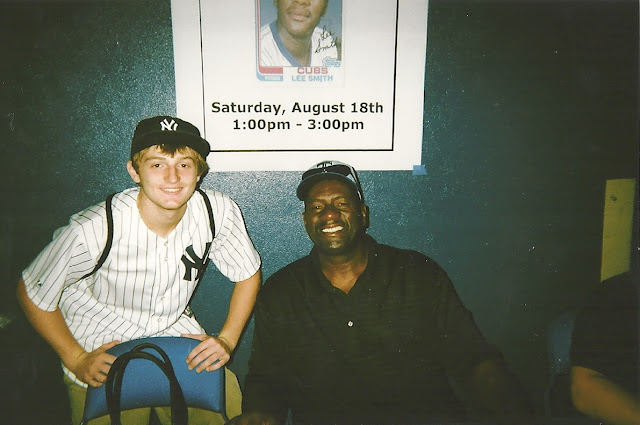 The final player we met was the free guest of the day, should be Hall of Fame closer Lee Smith! We waited almost an hour to get this opportunity, as the free signer always has the longest line. However, even though his shift was almost over, Lee was still an awesome guy to us. He signed my Yankees picture, despite only pitching 8 innings for the Yankees (0 runs in those 8 by the way) in his very brief stint with them, as well as a card I had with me of his. Dad and I told him we believe his 478 saves deserve to have a Hall of Fame plaque, and we wished him the best of luck on getting into the Hall in the future. He said thank you to us, and  did a praying motion, saying he hopes he gets in one day. You have to feel for a player that is itching to make their way into Cooperstown. I'm rooting for Lee from now on.

Still with me everyone? I know, the last few posts have dragged on and on, but I've had so many great opportunities lately that I need to document them somewhere! All of the signers we met were class acts, and fortunately, they all gave me very nice autographs too! Take a look:
Well, I appreciate everyone who stuck it through to the end of my journey, and I'm curious to know how you think I made out! Thank you to everyone I met for the great experiences and especially to my Dad once again for sticking out even though you weren't feeling 100%!