Hey guys, Drew back here. I'm not going to lie, I've spent the last two days playing Madden 13 like it's my job. But, I found a little time away from my Ultimate Team, and I'm back to show you all 4 of my more recent TTM successes! They're really starting to flow in well, so I figured I'd combine a few to share for you all! Take a look: 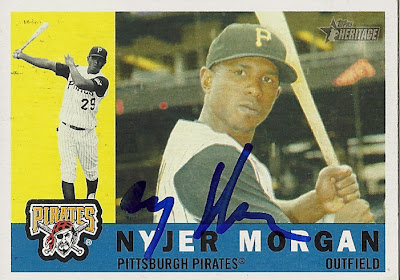 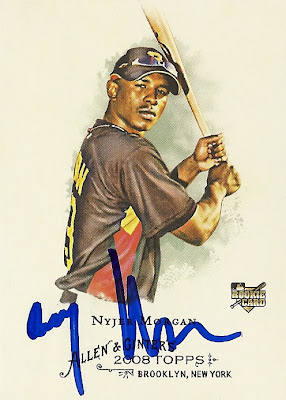 First off, I got the current Brewers' Center Fielder Nyjer Morgan to sign 2 cards for me- a 2009 Topps Heritage and a 2008 Allen & Ginter! He's got a pretty bad signature, however he's one of the more consistent signers throughout baseball, and he's got a very interesting alterego in "Tony Plush". He seems like a good guy, and although Prince Fielder isn't around anymore to boost his numbers, he still has a good chance at being one of the better all around athletes in baseball. This success took 15 days in total. 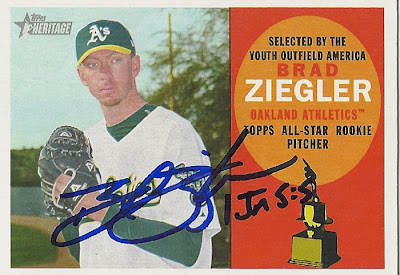 Next, Arizona Diamondbacks reliever Brad Ziegler kindly signed a 2009 Topps Heritage card for me, along with a bible inscription of 1 John 5:5, which reads "Who is he who overcomes the world, but he who believes that Jesus is the son of God?" Interesting. Not only has Brad been one of the better relievers in all of baseball over the past few years, but he also is a big baseball card collector, similar to Pat Neshek. I tend to put those two in the same group; the "Collector/Reliever/Submarine" group. This return had a TAT of only 9 days! 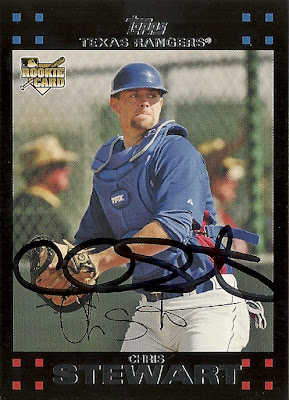 In addition to those, I also added 2 autographs from the current Yankees backup catcher Chris Stewart! The only two cards I owned of his were from the 2007 Topps set (his rookie card), so I figured only one scan would be necessary. But yes, he did sign both for me, in only 7 days! I really have liked what I've seen out of Chris this season for the Yankees, even though the trade for him didn't really make a whole lot of sense. He's had some timely hits, and while some people overlook it, if he was an every day catcher, he'd probably have better numbers on the season than their starter, Russell Martin. 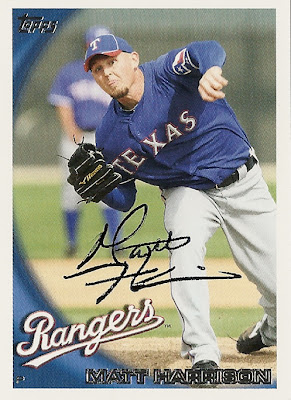 In conclusion, perhaps the best of the group was this signed 2010 Topps card of Rangers ace(?) Matt Harrison! Many people claim the Rangers don't have a true ace, but if anybody has stepped up to the throne this season, it's been Harrison. He's 15-8 on the season with a respectable 3.30 ERA, and has been a pretty solid starter for my fantasy team this season. I could've prepared this card a bit better, as the autograph did bubble up a little, but I'm very happy with it regardless! This success took 19 days to come back.

So, there you have it for this little catch up TTM session! Thank you to all who you signed for me!