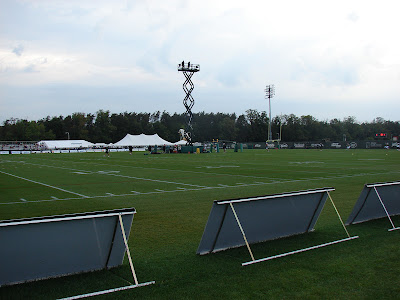 Hey guys, Drew back here, after a long, grueling car ride home from Cortland, New York. For a few weeks, my dad and I have planned up a trip up to the Cortland university to watch the Jets training camp in person! It's been a few pretty controversial weeks of Jets news led as always by the ringleader of the circus, Rex Ryan, but despite it all, we couldn't resist passing up on watching so many talented athletes come together for a practice session. We headed up yesterday afternoon and spent the night at a hotel about 7 minutes away from the camp. Although we slept horribly on the hotel beds that were harder than a rock; a little Monster and coffee was enough to get the two of us up and out of the hotel by 6:00 AM! Turns out we ended up being the first people there, so we became eligible for a promotion the Jets team runs for younger kids. The first 50 kids to show up for the camp were given a wristband, which allowed them to take the field following the practice for a good opportunity for autographs. Despite not necessarily being a "kid", Dad & I were going to try hard to get me one of those wristbands.

However, before I go into autographs and all that, I'm going to dedicate the rest of this post towards the actual practice. After being allowed into the facility, we went through a team store which we used to purchase some merchandise, and when we finished all of that, we found a spot on the far end of the two field setup. A guy working there told us it would be a good spot for autographs, so we took his word and camped out directly behind the fence and began our wait. 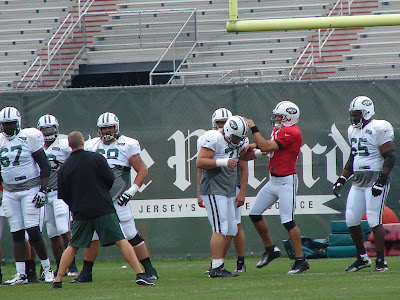 At around 8:00, practice was underway, and the players made their way onto the field to start warming up before drills and scrimmaging. Mark Sanchez, as seen above in the red penny, was loose and comfortable today, and that comfort level was a good sign of things to come. 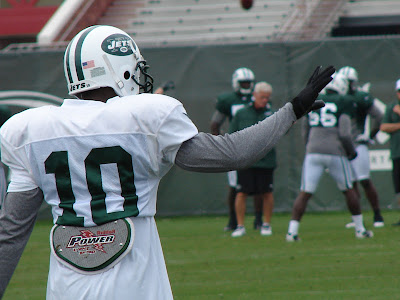 Receiver Santonio Holmes has been nursing a rib injury, causing him to miss the first (and now the second) preseason game so far. However, he was dressed in his uniform today, and ran a little bit on the sidelines. I've never been a huge fan of his, but with the receivers hurting and limited, I can't wait for him to be fully healthy again. He looks like he should be back relatively soon, probably within the next week or two. 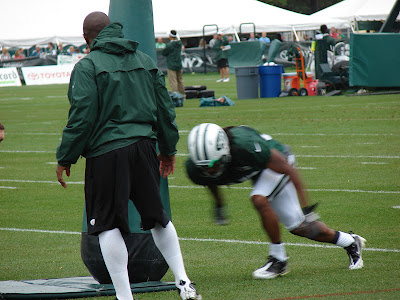 The players then begin their drills, and rather than moving and losing our spot on the fence, we stayed put and waited for the players to come in our direction. Sure enough, some did, as the cornerbacks made their way over to work on hitting drills. Antonio Cromartie, who also spent time working as a wide receiver, was encouraging the players to hit harder and harder, and the players seemed to interact pretty well for the most part today. 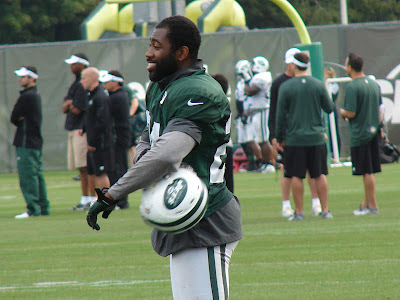 The Man of the Hour, Darrelle Revis, was indeed there for camp, which is another great sign. It's funny, because on the way up, we stopped for dinner at the Roscoe Diner, which apparently is a pretty well known restaurant up around the Catskill Mountains. Revis met up with the Jets management two years ago at the very diner to restructure his contract, because it served as a middle point between Cortland and NYC. We didn't know that was the restaurant until we got there, when the waitress told us about it. 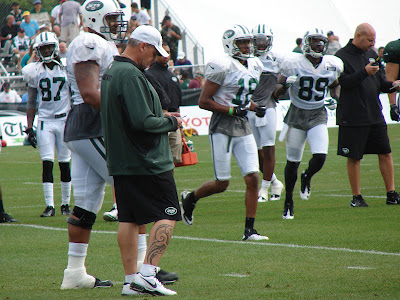 One of the more impressive things I saw today was, well, Rex Ryan! Holy wow he looks good! Over the offseason Rexy underwent a lap band procedure and lost over 100 pounds, and instead of sticking out like a sore thumb, he was a bit tough to find throughout the camp. The tattoo is fairly new too, and although I can't say I'm a fan of it; whatever floats his boat I guess. 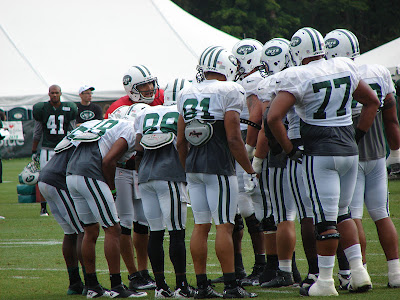 Sanchez had everything working for him today, especially during the 7 on 7's drills! At one point in the drills, he completed 5 of 6 passes, resulting in 3 touchdowns! His biggest plays happened to both be touchdowns to backup wideout Jordan White, who had a big day. This is great news for Mark considering just recently him and backup Tim Tebow completed 14 passes in a row during this same drill. 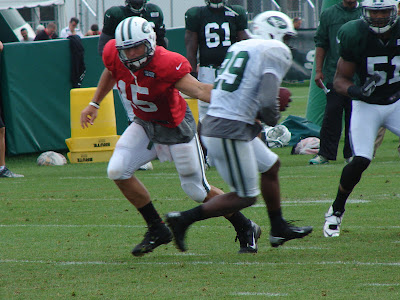 Speaking of Tebow, well, it wasn't the best of birthdays for the now 25 year old quarterback. He completed only 2 passes in quite a few attempts, however, he did run the ball pretty well as always. I'm a big fan of Tebow, but I'm still not all that sure how well the fit will be for him here in New York. It adds a lot of pressure on Mark Sanchez, and that's never really a great thing. 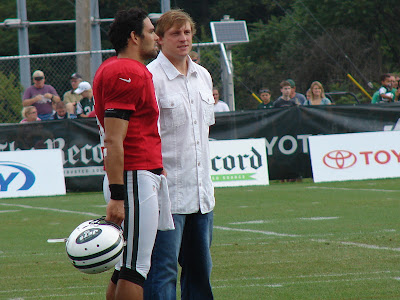 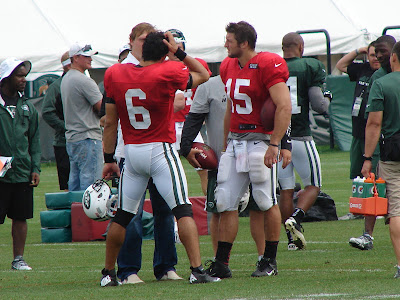 A former Jet great was on hand to offer some advice to the young quarterbacks though. Chad Pennington, the Jets quarterback between 2000 and 2007, was requested by GM Mike Tannenbaum to help mentor Sanchez especially. Pennington was a big favorite of mine in my early years as a Jet fan, and he's one of the smartest quarterbacks the game has ever seen. While he wasn't quite Joe Namath, his presence definitely will  help around the Jets team as a whole. Multiple people have reported that Pennington thinks Sanchez has improved a lot over the past offseason, and he gave him a lot of high praise.

We weren't quite sure who it was talking to the players for so long until I zoomed in on one of the photos above, and then we realized it was indeed Pennington. It was really cool getting to see him again, although he won't be coming back to football anymore, as he recently announced his retirement at the age of 36. 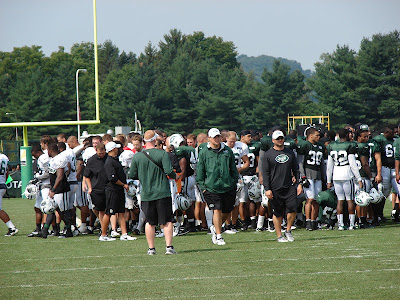 Eventually, practice came to a close. Pennington came to the center of the team and said a few quick inspiring things to the players, and led the Jets roar concluding the practice. Rex Ryan stated afterwards that it was great to have him back around with the team, and that he will attend some of the upcoming quarterback meetings to discuss plays and other things with the quarterback crew.

All in all, watching the practice was really fun, although some moments did get kind of dry at times. I'm sure if we moved with the offense throughout the practice we would've enjoyed it more, but as autograph collectors, we didn't want to move a muscle. In the next post, you'll see how we ended up doing. Stay tuned!