Hey guys, Drew back here! The same day I received my TTM success from Carl Erskine, another SASE was in my mailbox to accompany it! Take a look at my 89th career through the mail success: 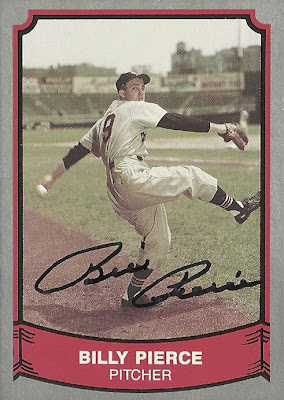 This time around, former All Star lefty Billy Pierce signed a card for me, in only a 9 day turnaround! Yet again, the card signed was from the 1988 Pacific set, which I've been adding to quite often lately, and yet again, the autograph is sharp! Pierce was as underrated as they get in his era, and had he not been a frequent opposing pitcher of the World Series champion Yankees teams, he may have had much better career numbers. He made 7 All Star teams, and was considered the top pitcher in the American League in 1956 and 1957, although he never won a Cy Young award. He was called up in the 1945 season by the Detroit Tigers, and won a World Series with the team despite not even pitching in a postseason game. Following that season, he was sent down, and didn't come back up to the big leagues until 1947. His second debut was enough to make the White Sox deal catcher Aaron Robinson and $10,000 for the phenom pitcher, and it sure did pay off. Following a 211 win career with a lifetime ERA of 3.27, the White Sox went down with perhaps one of the best one sided trades in MLB history!

If you guys haven't gotten a chance to send to Billy yet, I would highly recommend you to do so!