Hey guys, Drew back here! Lately, as most of you have seen, I've been really getting into pictures and memorabilia, almost to the point where I'd rather have photos over cards. I can see why people think otherwise, as Night Owl wrote in his post the other day, but I just feel like it would be cool to clutter my wall with all sorts of awesome autographs I can stare at all day long. And, I have to say, it's refreshing to hear a "I'm so jealous" by my friends once in a while, but I'll keep that between us! Anyways, sometimes I don't even ask for something and I ended up with it, as in this case. My dad's uncle received a picture from my Grandpa about 20 years ago, and for my birthday, he thought it would be fitting to pass it down to me, given I'm such a big baseball fan. 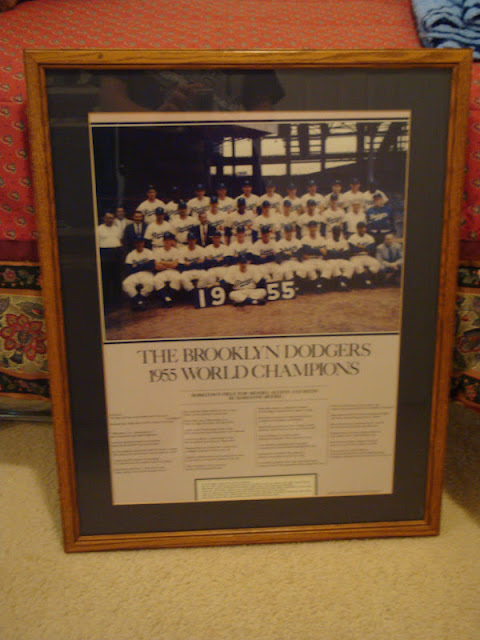 The picture was this team photo of the 1955 World Champion Brooklyn Dodgers! I am in no means a Dodgers fan, but I am a baseball fan, and I think it's awesome to now have a piece featuring legends like Koufax, Campanella, Pee Wee Reese, Duke Snider, and of course, Jackie Robinson. 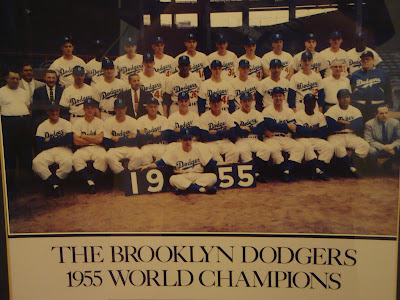 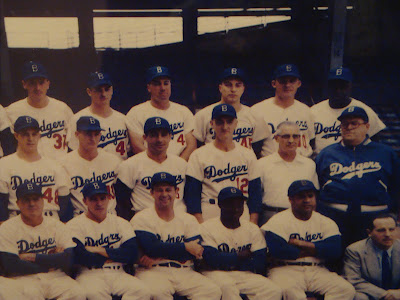 I don't know how soon it will be before this goes on a wall in my house, but if it doesn't have a good spot here, it will definitely one day. I dream of having a mancave when I'm older at my house so I can show off my collection even more. Hopefully that dream will come true, and if it does, I'll certainly find a spot for this. (even though they beat my dang Yankees in the World Series) Thank you Uncle John for thinking of me, and giving me this sweet gift. 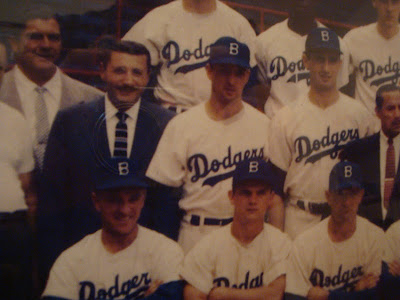 But, we're not done here. I found it fitting that the other day I happened to get a TTM success from one of the players in this picture- the guy to the left of Sandy Koufax. The success took only 9 days, and well, it was even better than I expected! 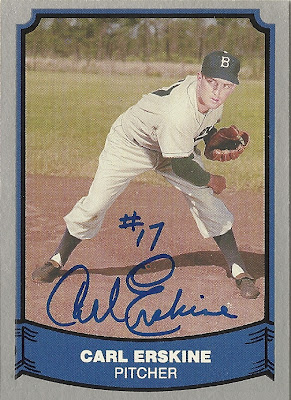 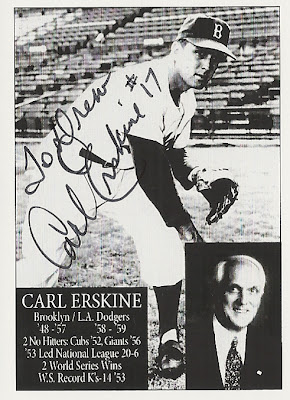 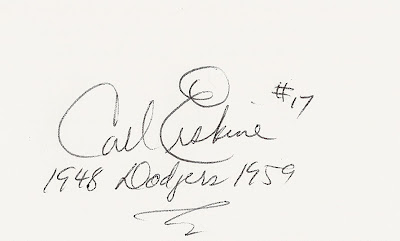 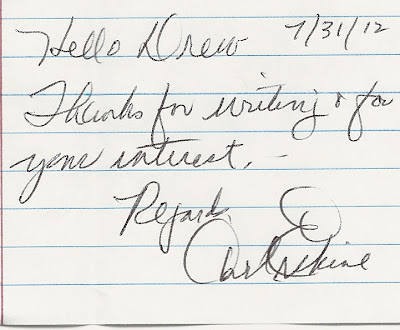 Yes, those are all autographs of Carl Erskine, a former Dodgers pitcher! Erskine was never quite Koufax, Drysdale, or even Newcombe, but he was certainly one of the more consistent pitchers of his era. The 1 time All Star finished his 12 year career with an ERA at exactly 4.00, compiling 122 wins and only 78 losses. He signed 4 items for me, even though I only sent two! He is now one of 6 autographs I own from the 1988 Pacific set, which I've been using a lot lately for TTM requests. The card below that is some sort of personal card he included, with a bunch of advice on the back. Also, he signed my index card and pimped out a nice inscription without a doubt, and he wrote "Hello Drew, Thanks for writing and for your interest, Regards, Carl Erskine" on my letter! I'm really happy with the success, and I'm glad I'm beginning to broaden my horizons with my baseball knowledge.

Again, a big thank you to my Uncle John for the great picture, and to Mr. Erskine for being such a class act! See Ya!
Posted by Drew at 7:00 PM