Hey guys, Drew back here. It's time to get back in the swing of things, as all of the events have concluded and I'm just about ready for my junior year of high school. I'm not looking forward to taking 4 college courses as well as a few other tricky classes, but if I succeed this year it will really propel me in the right direction for my future. It's a little bit of pressure, but I've managed to tackle it in my past 11 years of school experience pretty well. I'm not promising how much I'll be around on the blogs during that time, due to an excessive amount of work and all of that good stuff, but for now, I might as well take a crack at clearing up some space on my desk! Here is my 90th TTM success, which I got back a few weeks ago: 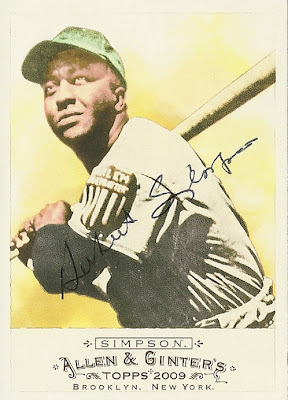 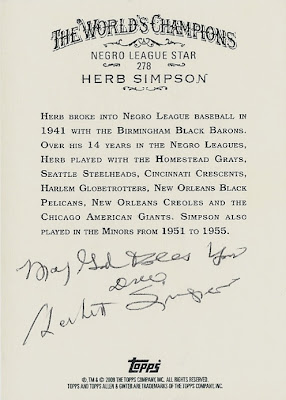 Former Negro League player Herbert "Briefcase" Simpson signed not only the front, but also the back of my 2009 Allen & Ginter card! I really enjoy sending to players from the Negro League, because I'm a history geek, and many people will say that the Negro League contained more talent than the big leagues at that time. Fortunately, Larry Doby and Jackie Robinson transcended the game, and we now see talent from all over the world playing in Major League Baseball.

Simpson, like many other Negro League players during the 1940's, was enlisted into World War II right during the prime of his career, but an interesting note was that he was the only black player on a white team that played in England in the Battle League. Also, when he first arrived with the Army in Scotland, he was the first soldier off the ship, so he had to kneel down and kiss the ground. After his discharge in 1946, he signed with the Negro League Birmingham Black Barons, and eventually went on to play with the Homestead Grays. He was solid first baseman who hit from the left side, and he had a few very good Negro League seasons, although he retired before having an opportunity to play in the bigs.

So, as I noted, not only did he sign the front, but he signed the back as well, saying "May God Bless You Drew, Herbert Simpson". I've never seen a person do that before, so that was pretty nice of him. I also included a few questions on an index card, and he did indeed answer the questions for me: 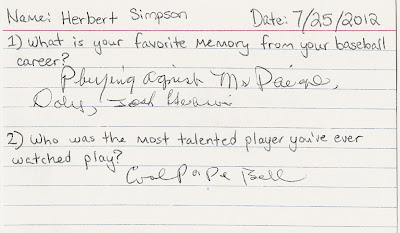 1) What is your favorite memory from your baseball career?
Playing against Mr. Paige, Doby, Josh Gibson

2) Who was the most talented player you've ever watched play?
Cool Papa Bell 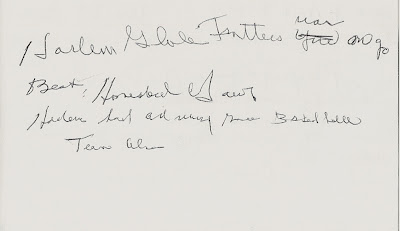 On the opposite side of the index card, he wrote some sort of note about him playing for the Harlem Globe Trotters. I can't really tell what it says, so if any of you could help me decifer it I would really appreciate it.

If you guys haven't ever sent anything to Mr. Simpson, I highly suggest you do. He seems like a class act guy, and I'm glad I finally got around to sending to him. Now if only I knew what the index card said...