Hey everyone, Drew back here! At last weekend's show, Dad and I needed an alternate plan for pictures, because I accidentally left home without my camera. We ended up stopping at a grocery store along the way to pick up a disposable Fujifilm camera to use for meeting players. My mom just got the pictures done and is at work for now, so we're going to skip that until tomorrow, and continue on with our recap.

It has certainly been a while, but Dad, rather than buying singles for me at the show, decided to buy a box of 2012 Topps Gypsy Queen for us to open together! As I've mentioned, Gypsy Queen is definitely my favorite product of the year, due to several factors that I'll explain as I go through the recap. Every box contains the standard 24 packs, with 10 cards per pack, one being a mini card. Rather than having a box topper, every box contains a little 10 card exclusive mini pack featuring assorted minis you wouldn't find in the regular packs. To go along with all of this, there are 2 relics and 2 autographs per box on average. So, without further delay, let me proceed to reveal what we pulled out of our box! 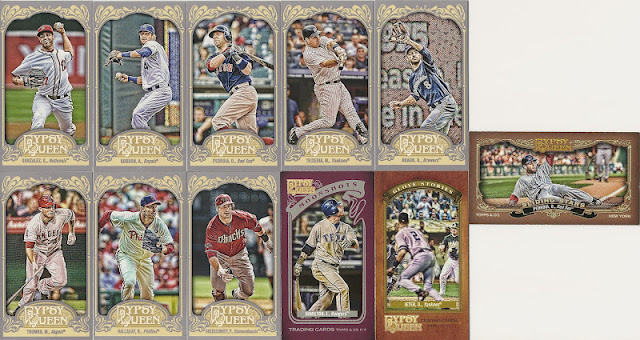 We'll start with what came out of the mini pack, which we actually pulled 11 cards in. I was wondering why all of the cards didn't fit into the holder, and then I realized we were given one more than the average pack! All of the players were fairly big names; the biggest probably being Roy Halladay, Mark Teixeira, and Ryan Braun. We also pulled mini inserts of some, ya know, solid names- Josh Hamilton, Derek Jeter, and Dustin Pedroia. Not too bad! The base cards feature a very elegant, yet intense design. The photos of the players are edited to have more of an artsy look, and I think they came out fantastic for the most part! Since I really enjoy a nice autographed card, I always look at how well the cards would come out signed, and well, a lot of these would look beyond awesome with an autograph across them! 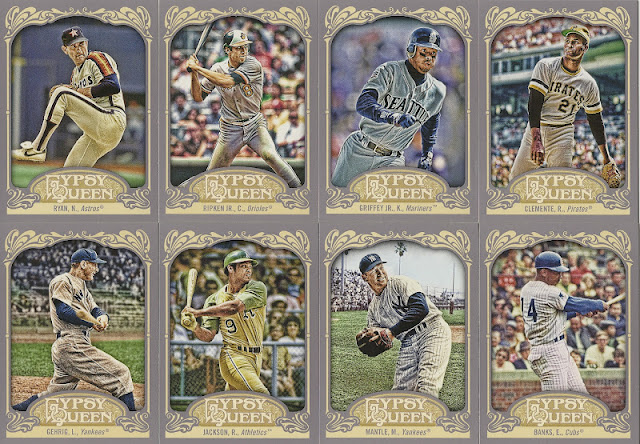 Like I said when I opened a couple loose packs of GQ at the show, I absolutely love the variety as well. Many older players got themselves a card in the checklist, guys who are much more deserving of a card of this caliber than some lower level rookies Topps may have included a few years ago. I honestly can't see myself getting rid of any of these cards, they're just too nice! 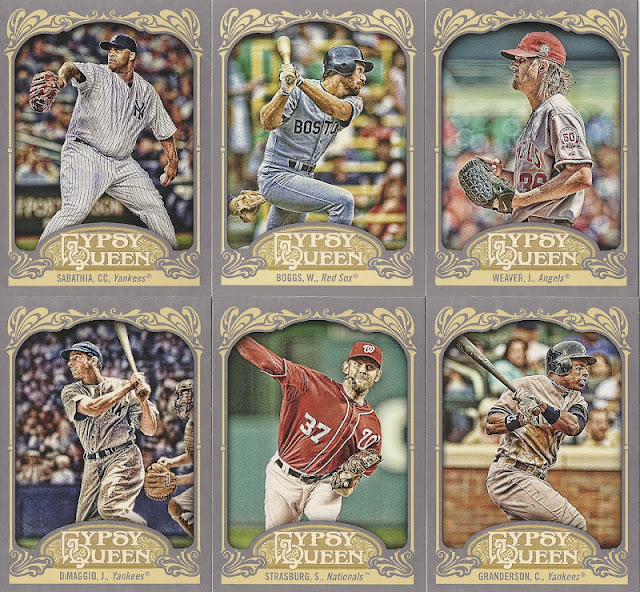 Unfortunately, Topps had to throw in one of their relentless gimmicks to knock the set down a level, by including short printed cards featuring different photos than the regular base card has. I pulled six from what I could tell: Sabathia, Boggs, Weaver, DiMaggio, Strasburg, and Granderson; all being players I like. I also realized that the difference in the two DiMaggio cards is that the base card is zoomed in on him a little more. That's it. 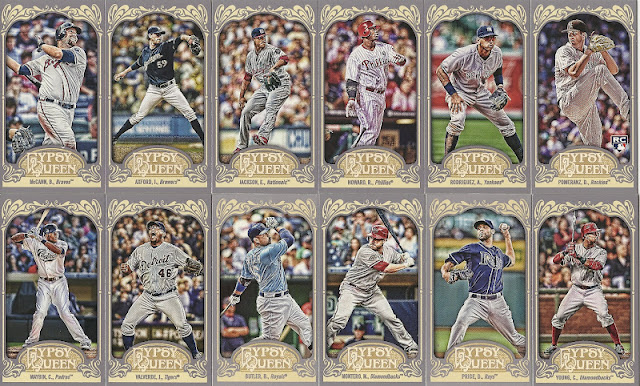 As stated earlier, every pack also comes with a mini, to go along with the box topper pack. I think Topps could've done better with this product if they didn't include the minis in the packs, and just had them as box toppers. They would be more limited, therefore increasing its value. All of these minis above are just the regular minis, but don't worry, Topps didn't forget to make things more complicated to set collectors. 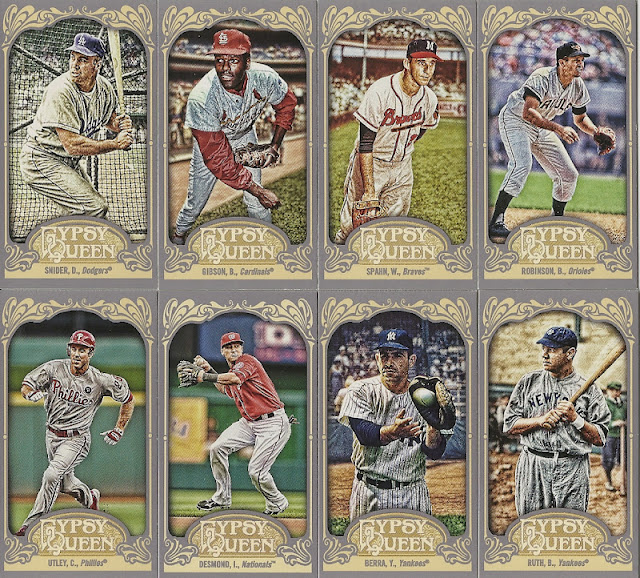 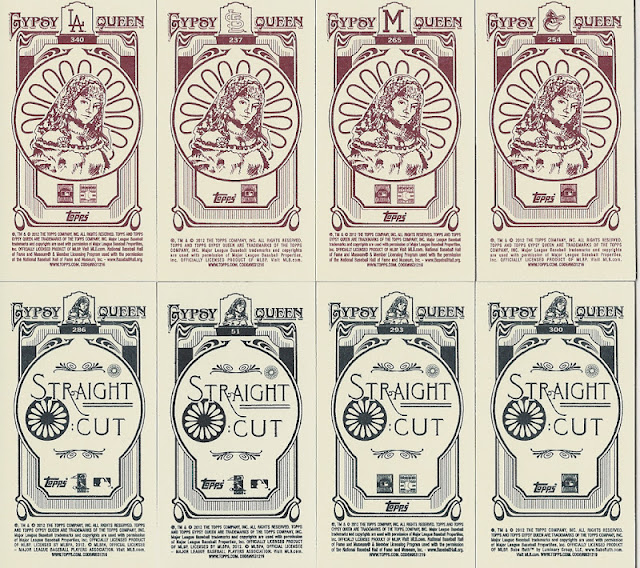 What did I tell you. To go along with the exclusive box topper pack and the regular minis, Topps also threw in 4 red "Gypsy back" minis as well as 4 "Straight Cut" minis. Each are one in six packs, and while we pulled some solid names, I really don't see why these subsets are all that necessary. People may say Topps is trying to preserve the nostalgia; well, if they really wanted to do that, all the cards would be minis. Beautiful cards, yes, but with a lack of importance, they knock the set down a bit. 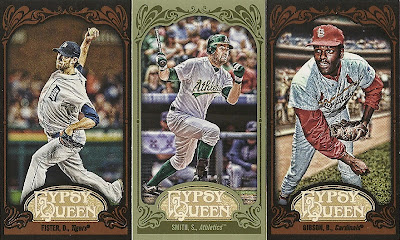 Sorry everyone, but I'm not done with minis. We now have: the exclusive box topper pack, regular minis, Gypsy back minis, Straight Cut minis, black minis, AND green minis of every player in the set. And we wonder why this hobby has been dying down of late. One big chase for collectors is for all of a certain player or team's cards, but with the amount of cards of each of them out there today; those collectors will go broke on JUST the base and inserts. Topps, please, take notes, I'm preaching to a choir over here. 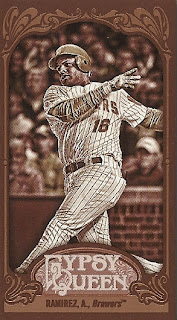 Our final mini was this sepia toned mini of Aramis Ramirez, numbered 94 of 99. I like Ramirez, and this is kind of a cool idea, however, wouldn't they be so much cooler as rare throw ins in the exclusive mini pack? Personally, while the pack on top was cool, if they featured some semi-rare things like these, I would have enjoyed opening it a little more. 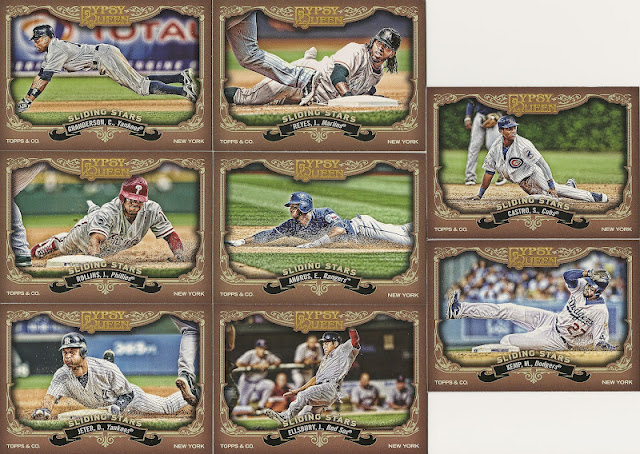 Now, we go on to the concept subsets: Sliding Stars; Moonshots; and Glove Stories. I have a feeling the sliding stars idea wasn't really an idea, just Topps employees having fun with the program they use to edit the cards and making a fairly pointless set of it. I mean, these won't sell for much more than the base, considering I pulled 8 of them in my box. Again, great looking cards, but seriously, is this needed? 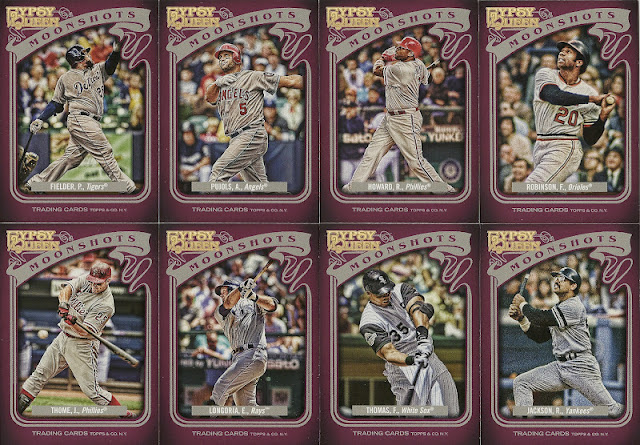 I think all of you know what I'll say here, and on the next insert, so I'll just show you what I pulled between Moonshots and Glove Stories. 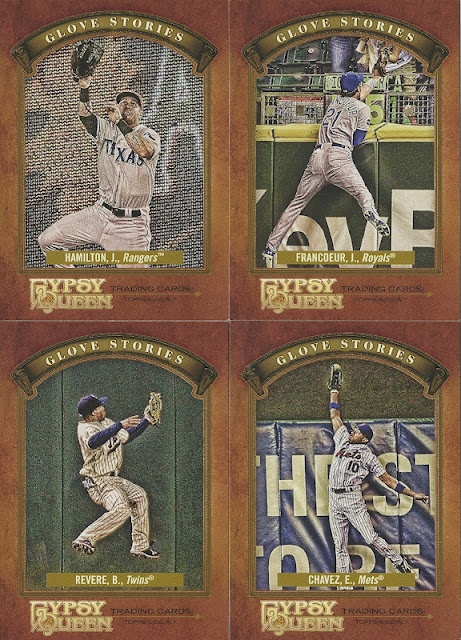 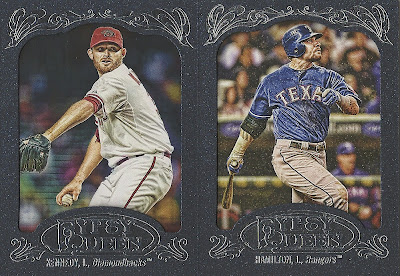 Okay cool, now onto the good stuff! We pulled two of the blue framed parallels, Ian Kennedy and Josh Hamilton; both numbered out of 599! Hamilton is one of my favorite players, so I was so pumped to pull his insert out of a pack. I think Topps did a really good job with these parallels, because you only get a few a box, and they remain relatively rare. I think after years and years of parallel experience, Topps should have a good idea of how to get their cards to sell or not. This is one way that works. Oh, and by the way, these are the nicest looking cards we pulled in the box. 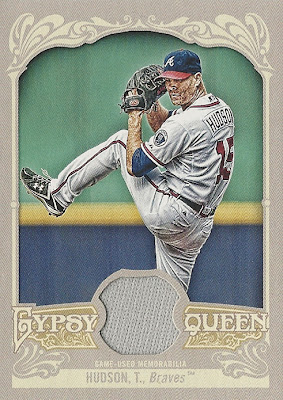 Finally, our 4 hits. First and foremost, we pulled this gray relic of Tim Hudson. Normally, I'd complain, as a swatch of Tim Hudson isn't a whole lot to write home about. However, the card looks sweet, and if I were a Braves fan, I'd be picking this up in a heartbeat. It is for trade, since I don't really have a use for it, but it wasn't too bad of a pull. 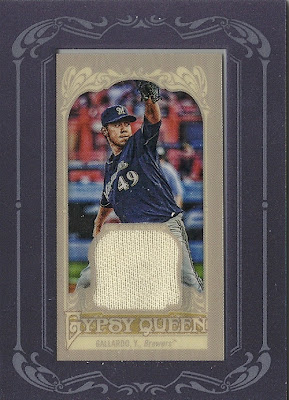 Also for trade is our second and final relic of the box, this framed one of Yovani Gallardo. I like the variety in the relics; how you get one framed and one basic relic per box.  Gallardo isn't a terrible pull either, and the relic has a cool feel to it, however I don't have much of a need for it either. 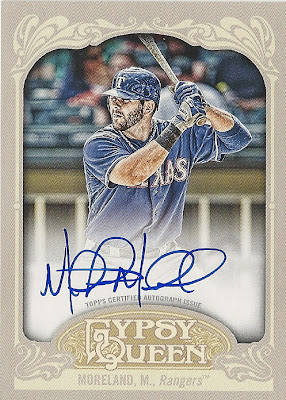 We didn't do too poorly in the autograph department either, the first being of Rangers first baseman Mitch Moreland. Any chance you get to pull a Ranger is a good chance, since it's almost a given that they'll still be around come October. It'd be cool to have pulled this and then watch Mitch come through in a clutch spot this fall. As for the card itself, well, besides for the sticky note yellow card back; it's awesome. Moreland has a solid autograph compared to most others, and the white fade look really makes the auto stick out well. 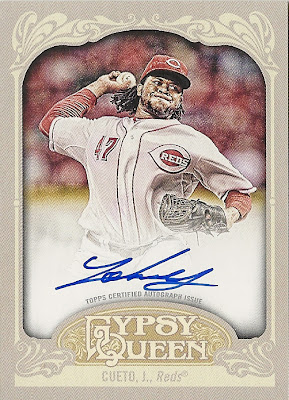 The final autograph pull was a pretty nice one, being of Reds ace Johnny Cueto! I've always liked Cueto, as I mentioned a few weeks ago when I picked up an auto of his from the new Tier One set. He doesn't have as nice of an auto as Moreland- in fact, he only signs his first name, but it is an upgrade from when he was a rookie back in 2008. For now, I think I'm going to hang onto both, as he's currently looking like a major Cy Young candidate. However, if you make an offer I can't resist, I'll consider!

Overall, I'm a big fan of Gypsy Queen, no matter how many gimmicks try to knock it off its throne. I think the minis can be blended into one more universal set, with the sepia parallels coming one per box as a mini. The insert subsets I can live with, but they don't really seem to fit with the set idea very well. I'll give it an A- as a final grade, only because the minis tend to be a tad bit confusing to understand. Then again, after years of dealing with it in Allen & Ginter, most collectors are used to Topps' weird ways.

Thanks Dad for getting me the box again; I really enjoyed opening it up with you! Part 4, dedicated to all 6 players I met, coming right up!