Hey everyone, Drew back here. It is now that time where I'll try to show you how I blew a good portion of my birthday money! Aren't you excited? Here goes. 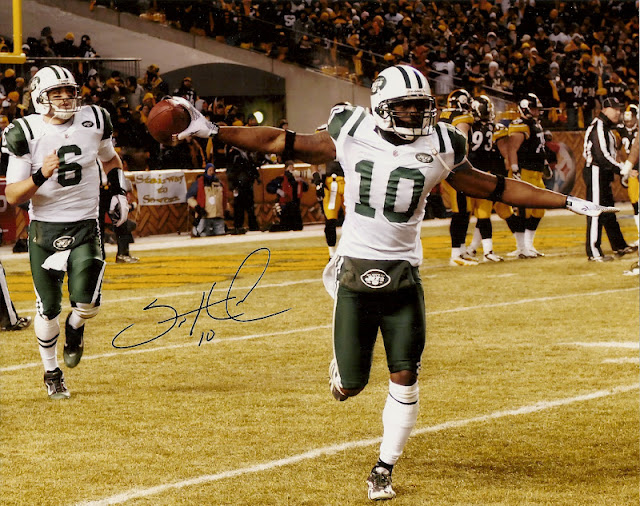 First and foremost, there was a local dealer at our show that had a lot of football pictures for sale, all for fairly low prices. He was a nice guy, and although his stuff didn't have COA's, I trusted him because he told me each and every signing he got the pictures signed at. I remember Santonio Holmes having a local appearance at a Gold's Gym nearby, and sure enough, this picture I bought signed off of him was from that signing! I had a baseball game that day and missed out, but from what I've heard I didn't miss too much, as he's a bit of a jerk. However, I can't discredit him for helping the Jets big time throughout the past couple of years. 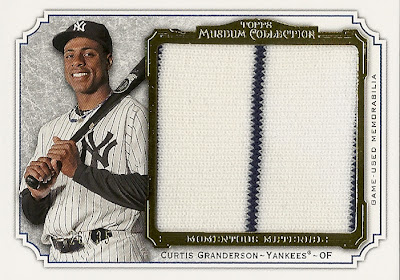 Second, we have a beautiful 2012 Topps Museum Collection jumbo relic of Curtis Granderson! It has one very visible pinstripe, as well as 2 others that are a bit cut off, oh, and it's numbered out of 35! I've loved Museum Collection from the start, and I've been meaning to acquire one of the large relics they feature. Finally, I did. 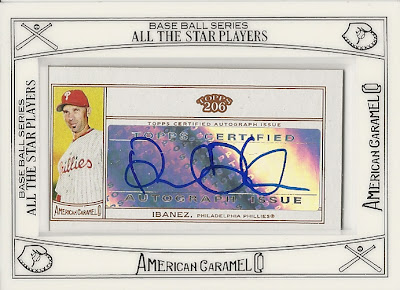 Say what you want about the ugly looking sticker autograph, but Raul Ibanez has been beyond clutch for the Yankees this year! There aren't a lot of great autographs of his out there, and for the price, I couldn't go wrong. I didn't like the signing at the beginning of the year (I wanted Damon), but the Yankees ended up making myself, as well as many other critical fans, look stupid. 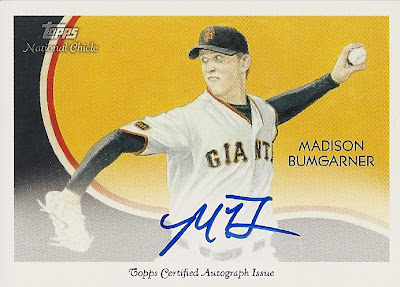 From the same vendor, I also took home this 2010 Topps National Chicle autograph of Giants phenom pitcher Madison Bumgarner! I don't follow Bumgarner a whole lot but he has a lot of potential, and I've been meaning to get his autograph off of the checklist. It's a very nice card, even though a majority of this product got a bit sketchy. Surprisingly, with all of the autographs of current players that I own, this is my first of any Giants pitcher. 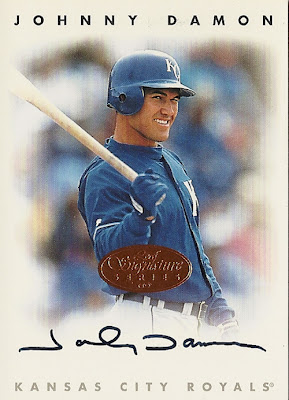 As I mentioned earlier, before this season I wished the Yankees would try to sign Johnny Damon again. But after his performance on Cleveland, leading to his release, I can see why they passed on the aging veteran. However, I loved Damon while he was a Yankee, and I needed his autograph pretty badly too. Not out of my favorite product, but it is very nice nonetheless. 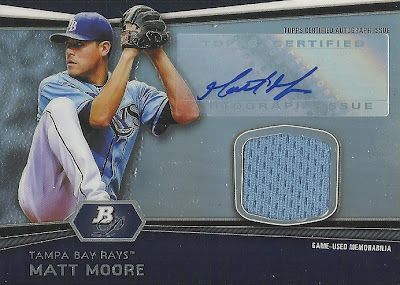 I also bought this 2012 Bowman Platinum relic autograph of Rays rookie Matt Moore! Moore technically is in his rookie season, but he impressed big time in the postseason, enough to make the rotation this year. I took a chance with him in fantasy baseball, and while he started off pretty badly, he got it all together and lately he's been beyond solid. The card isn't numbered, but it really is nice for a sticker auto. Well done Bowman Platinum, well done. 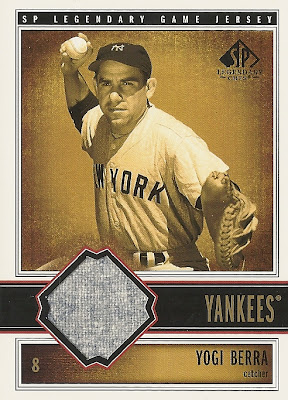 The final purchase of the day just so happened to be with my good friends Rich and Hunter, and it was a 2002 SP Legendary Cuts relic of Yogi Berra! After going to his museum, I almost felt like it was necessary to buy at least one card of his at the show. With just under $20 left, and searching for just the right closing card, I came up clutch with a beautiful wool relic swatch. I'm not as big into relics as I once was, but that wool always makes me think twice.

Stay tuned for Part 3 of 4 of my card show recap!