The Conclusion to My Summer- An Ending Providing the Biggest Bang.

Hey guys, Drew back here! After a nice weekend up in the Adirondacks, I'm feeling quite nice, so I think it's about time I share with you all the biggest part of my collection, which was given to me towards the end of my sophomore year at school! I've never mentioned it on the blog, but most of the people who know me personally would know what I'm referring to. I was always waiting for the right time to show this off, and well, I figured it was about time something I cherish so much finally got a little love. My Grandpa Walt is getting up there in age, and is battling the struggles almost every older person could face. He's done it all and more, including growing up playing baseball with a man you guys may have heard of- Joe Torre. He's been very successful throughout his working years, and he decided to share some of his success with each of his grandchildren. He wanted to give all of us something to remember him by, something that we would never lose or get rid of, and something we would be happy to own. My sister was given a new bedroom set, my cousin some new tools and a toolbox. However, of the 8 of us grandchildren, I feel like I was given the most fitting and incredible gift. Behold... 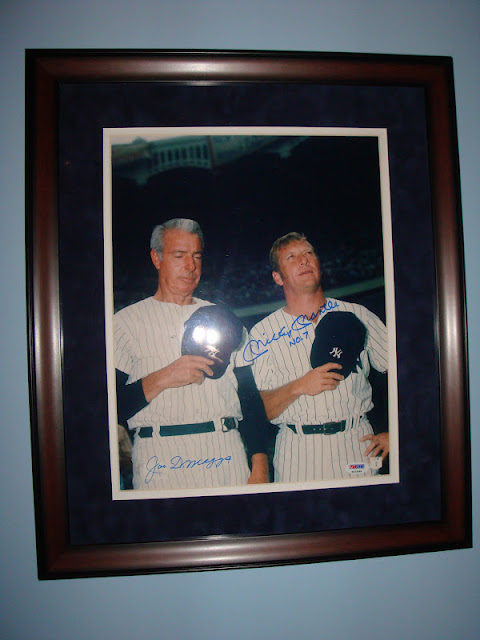 The holy grail of the "drewscards" Collection, a framed autographed photograph of two of the greatest Yankees to ever put on the pinstripes. "The Yankee Clipper", Joe DiMaggio; and "The Commerce Comet", Mickey Mantle! A while back, I was in New York City with the family, and we stopped at a place called "Brigandi Coins & Collectibles". It was stockpiled with incredible pieces, like this, this, and this for example! However, when I saw this picture, I was in heaven, especially for the solid price it was being sold for! Not only could I own one of the greatest autographs in Yankee history, but two!

The collector in me didn't allow me to let go of my new dream, and when my Grandpa asked me what I'd be interested in, this was what I thought of first. Besides for my obsession with the photo, a main reason I wanted this was because he took me to several Yankees games over the past couple of seasons. He grew up with legends like DiMaggio, Berra, Ford, and Mantle putting on the pinstripes, so what better way to remember a lifelong baseball fan then to own two of his childhood idol's autographs! He liked the idea enough to oblige, and my dad set up the purchase with Brigandi. Apparently, the photo lasted a few weeks going unnoticed in my basement, as it was in a box and I never came across it. Finally, my Dad brought it upstairs and gave it to me, and it couldn't have made me any happier! 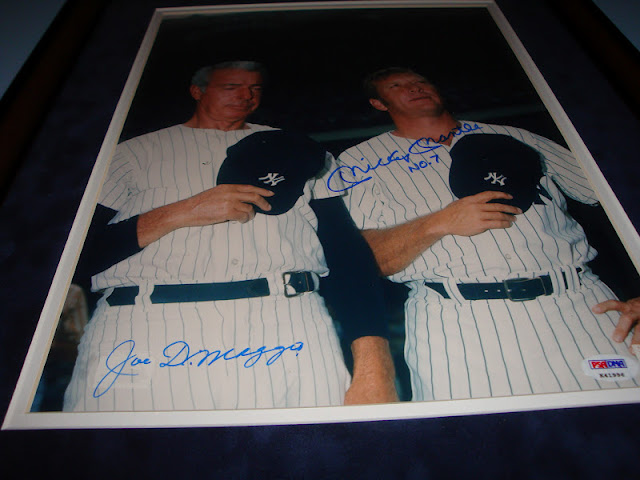 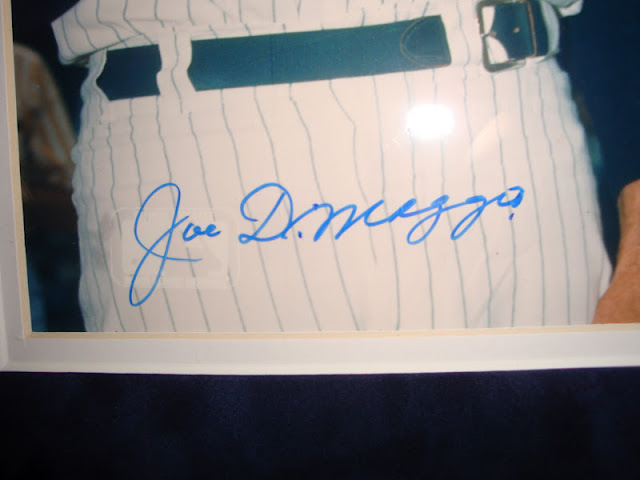 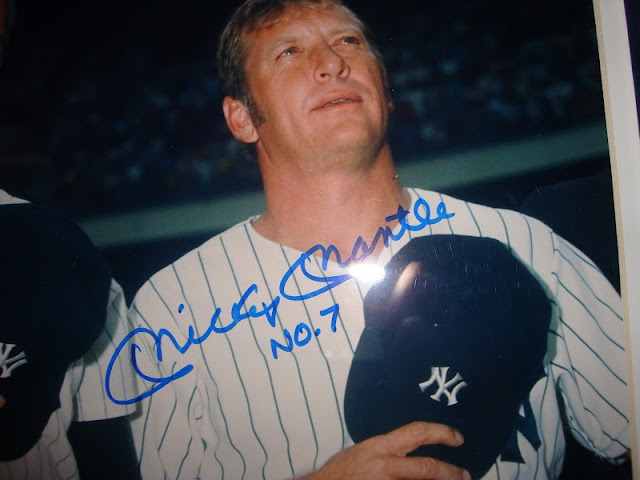 The photo was taken at an Old Timer's Game, although I'm not fully aware about the full details of the photo. I have heard numerous stories in the past about how DiMaggio seemed very arrogant about his career and lifestyle, and that he would refuse to go to the Old Timer's Festivities if he wasn't the last name called. Also, if Mantle or any other Yankee had already signed the sweet spot of a baseball somebody asked him to sign, rarely did he ever sign the ball in any other spot. He had to be in the center of attention at all times, and for the most part it seemed like Mickey was ok with that, even stating that DiMaggio was a role model and he wasn't. Mantle endured a lot of hardships during his career, and this touching interview by Bob Costas really tells the story better than I ever could.

Both autographs are absolutely perfect, and are much better than any autograph you'd find from an athlete today (with the exception of a select few). I think the pretty penmanship they had just added to the aura of their autographs, which makes it an even more special piece. 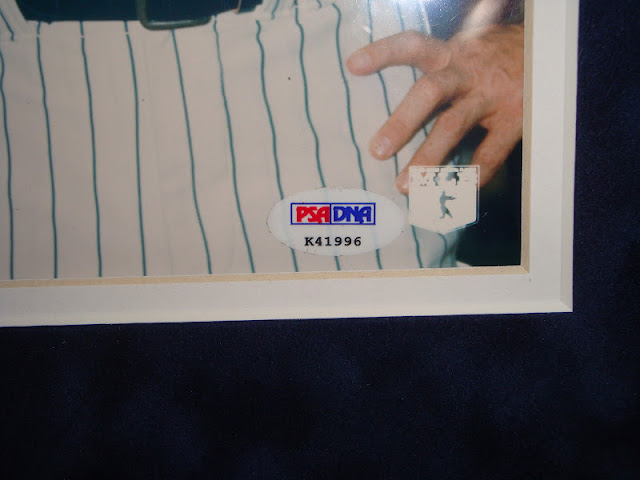 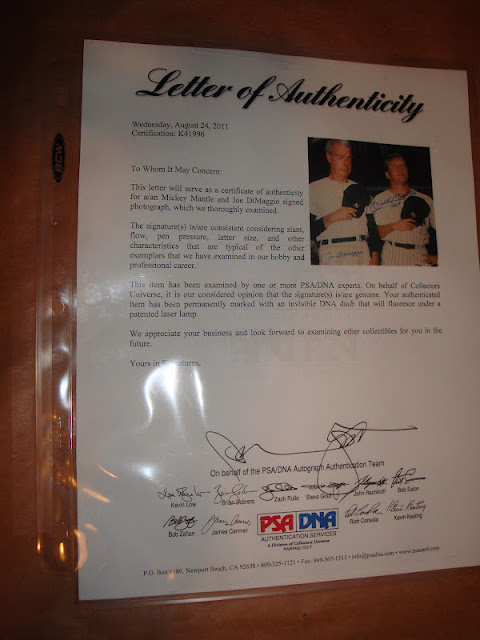 The picture came with a Letter of Authenticity from PSA/DNA Authentication, which is one of the more renowned services worldwide for sports memorabilia. There's no doubting whether it's authentic or not, and it looks fantastic on my wall, without question! The gift wasn't even necessary, but I appreciate it so much. Undoubtedly, this is now my highlight of my collection, and I'm so glad I finally got to share it with everybody.

Thank you SO much Grandpa, you don't know how much a piece this special means to me, and I promise this will never, ever leave my home, wherever I am one day. I'll never forget the great times at Yankee Stadium, and the stories, and everything you had to share. It means a lot.