Hey guys, Drew back here! So, school is in session once again, which normally means something along the lines of a semi-hiatus on the blog. I hate doing it, but I have to do it, especially due to the difficulty of junior year. But, the homework load was light tonight, and I didn't feel like getting ahead of myself, so here are a few cards I got in from Check Out My Cards the other day! 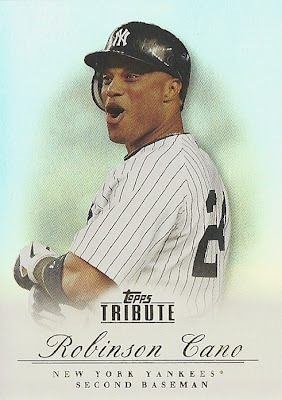 First, out of the new Topps Tribute, I got the Robinson Cano base card. I figured with the extra bit of store credit I had, I'd knock this one out considering it's rare for a blogger to send out Tribute cards in trades. Who could blame us, they look incredible? 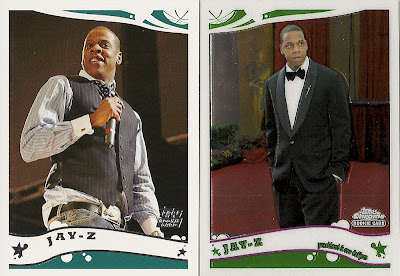 Please, don't judge. Over the years, you've seen me post stuff about Ringo Starr, Paul McCartney, Aerosmith, and a lot of other old bands. However, my music taste is very diverse, and it does indeed extend to rap. Jay-Z is obviously one of the biggest rappers to ever exist in the industry, and his older music definitely was influential to a lot of young rappers today. I'm not a Lil Wayne fan, and don't get me started on Nicki Minaj, but Jay-Z, along with 2Pac, Biggie, Eminem, and a few others I definitely am a fan of. 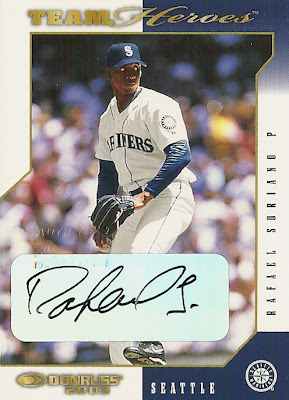 Getting back to baseball, here's a 2002 Donruss Team Heroes autograph of current Yankees closer Rafael Soriano! It's been weird seeing somebody other than Mariano Rivera close out games, but for the most part, he's been just about untouchable. I guess Brian Cashman really did know what he was doing by signing this guy a couple of years back. I find it funny that I picked this card up for about $3 when he was first signed by the Yankees, and I didn't ship it until just now. Oh, the joys of store credit. 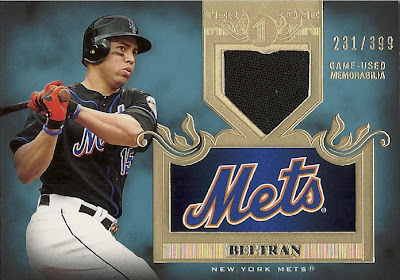 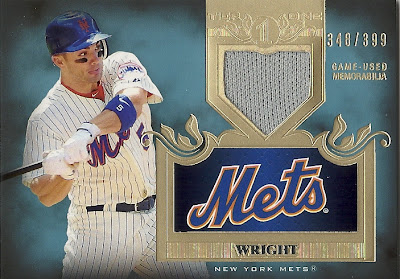 Well, I had to get these for the Tier One set. Otherwise, I wouldn't have bought them. I do like David Wright, and I'm glad to see he's having a solid year again. I love the black Beltran relic though, despite not being a big fan of his. He's ok, I guess. 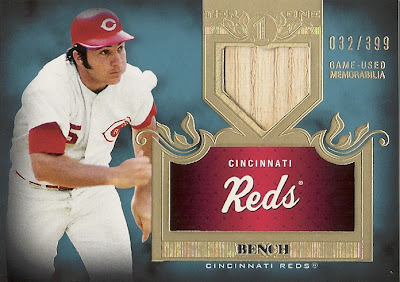 THIS guy was just a bit better than ok! I absolutely love the look of the Johnny Bench relic, and I'm glad I finally picked this one up. Now, the only card remaining in the set that I need is the Babe Ruth dual relic, which I plan to ask for this Christmas! If I get it then, it would be one year total since I started the set, which is a relatively quick time for a rather expensive set! 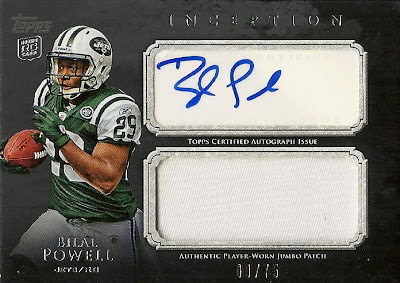 The final two cards from my order happened to both be of the Jets variety, and it's only fitting that I show them after their beautiful butt-whipping of the Bills yesterday, 48-28! It was the most points they ever scored in an opening season game, and Mark Sanchez looked terrific! I'm trying not to get my hopes up too high, but it was certainly encouraging.

As for the card, this one was out of 2011 Topps Inception, a Bilal Powell rookie relic autograph numbered out of 75. Rex Ryan is a big fan of Powell for his quickness and agility, and I hope he has a fairly decent role on the team this season. Shonn Greene bores the light out of me, so maybe this guy could get a few more opportunities! 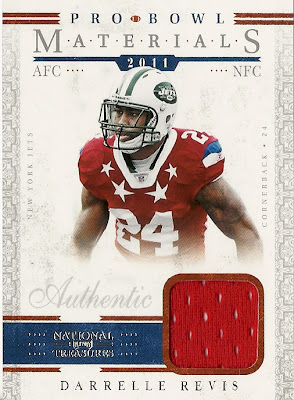 This guy, on the other hand, doesn't need any introduction! Out of 2011 National Treasures, this Darrelle Revis Pro Bowl relic certainly was a great way to cap off my purchase! Revis played a good game yesterday, having an interception early on. Unfortunately, his day ended after Bart Scott's cleat happened to fall towards his head, and he received a mild concussion. I hope for the best that Revis is ok, and that he'll be ready to go by next Sunday, especially since we're playing the Steelers. The card here is numbered only 30 of 99.

Like I said before, no promises on how often I'll be around in the coming months, but I'm going to make an effort to check in once in a while! Thanks everybody!