Hey guys, Drew back here! Well, a few weeks into junior year and I can already tell this is going to be a long school year for me. I'm taking four college courses, and they are back to back to back to back on my schedule, so it's going to be difficult to stay stress free, for sure. Anyway, about a month ago, I got back this really sweet TTM success from one of baseball's best general managers! Oh, and his movie isn't bad either! 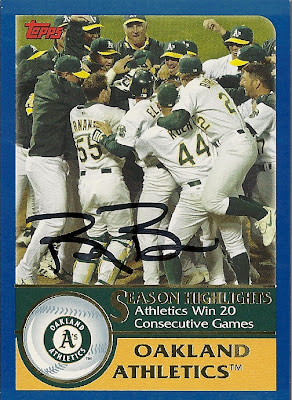 Oakland A's General Manager Billy Beane signed two cards for me, with a TAT of only 6 days! Beane obviously became one of baseball's biggest names in management after his great success in the early 2000's with his Moneyball strategy. But, he took off even more after the Oscar award winning movie "Moneyball" was released, starring Brad Pitt as himself. I loved the movie, so I decided it would be really cool to try out Mr. Beane TTM. Sure enough, he signed both cards I sent him, including the 2002 Topps card highlighting Oakland's 20 straight wins, which became an MLB record. 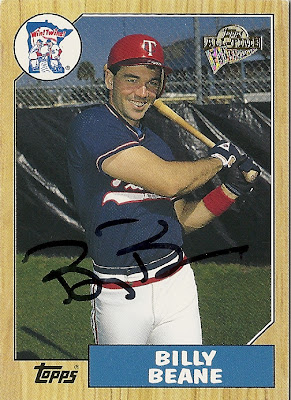 Also, Billy signed this Topps All Time Fan Favorites reprint of his 1987 rookie card. Beane was a bit of a bust when it came to his playing career, however his remarkable job as a GM made up for all of that in a hurry. Stay tuned for Moneyball 2, because Oakland is making another heck of a run towards this year's playoffs. Great job Mr. Beane! Oh, and thank you for the autographs!