Hey guys, Drew back here! After about a month straight of full 5 day school weeks (yep, no Jewish holidays here), we finally reached Columbus Day, thus giving me a three day weekend! Despite the allegations against Columbus and how he may not have actually done anything significant, I'll take a free day any day. Anyways,  over the summer I sent out quite a few TTM's one week, and I believe I've gotten all but 3 back. These successes here helped me reach an awesome achievement- 100 Through the Mail successes! I'm really glad I've taken up the opportunity to send out letters, as it makes going to get the mail every day fun, and it allowed me a chance to get autographs from stars like Peyton Manning; Yogi Berra; and heck, even Lil Wayne! Take a look at who I got back from this time! 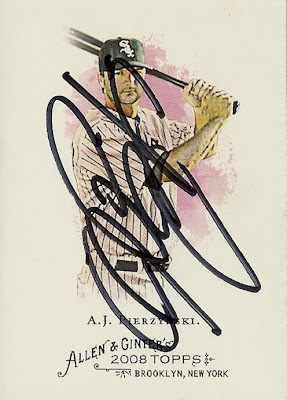 First off, White Sox catcher AJ Pierzynski signed a 2008 Allen & Ginter card for me! It appears that most every baseball fan (besides Sox fans) can't stand this guy. I've always liked him. He plays with a lot of heart, which is in my opinion the right way to play. He makes baseball interesting, and he's the definition of a catcher. Not to mention, he batted .278 this year with 27 homers and 77 RBI! I'd take him over Russell Martin any day! 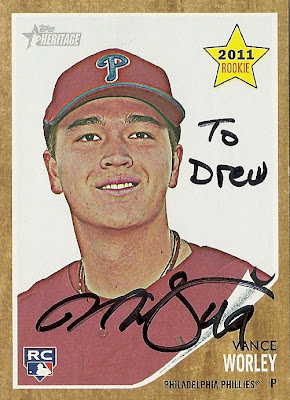 #98 was Phillies up and coming pitching star "The Vanimal", Vance Worley! Worley has a lot of promise, but like basically all of the Phillies pitchers minus Hamels, he struggled in 2012, going 6-9 with an ERA of 4.20. Despite the difficult sophomore slump, I think he has quite a bit of potential, and after this awesome success, I'll definitely pull for him! 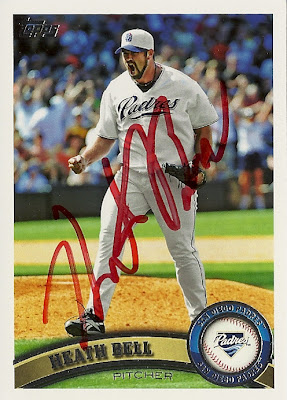 Next, Marlins closer Heath Bell signed a 2011 Topps in red sharpie for me! The red really speaks for who Bell is, a crazy, different player. Who can forget his epic sprint and slide combo in the 2011 All Star Game? Sure, this season was a bit of a laughing stock for all things Miami Marlins, but this guy has had a lot of great seasons, so who's to say he's done? Baseball needs more characters like this guy, or the one with the bigger beard in San Fran, but that post is for another day. 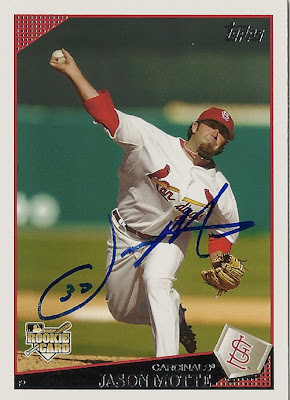 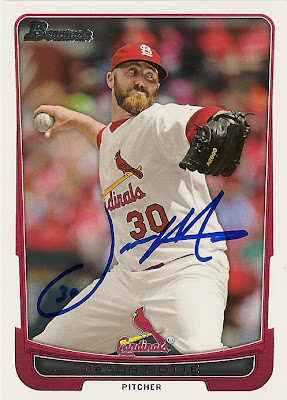 Perhaps the most relevant of these players to the current games going on is Jason Motte, the closer of the St. Louis Cardinals! Motte signed two cards for me, including a 2009 Topps rookie card, and he accounted for my 100th TTM success. He's been one of the best closers in baseball over the past few years, so I was really happy with this one. On another note, it'd be great to see St. Louis continue to play well, just to rub it in Albert Pujols' face. So much for a hometown hero. 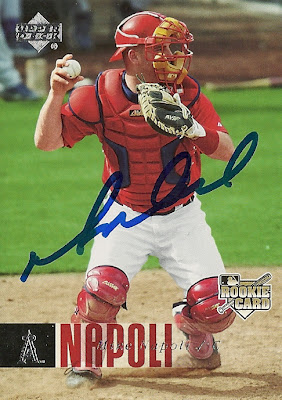 The final success, for now at least, was Rangers catcher Mike Napoli, who signed 1 of 3 cards, this 2006 Upper Deck rookie card. The other cards would've looked even nicer signed, but I kind of like the signed rookie card idea too. Napoli had a huge down year compared to last season, but who honestly thought he was going to put up those crazy numbers again? He's a solid hitter, but I don't think he'll ever top his 2011 campaign.

Thank you to everyone who signed for me! Go Yankees!