Two Playoff Heroes in my Tier One Set!

Hey guys, Drew back here! I realized I've been really on an eBay kick lately, and some of this stuff is really starting to pile up. I showed you all the beautiful Hank Aaron dual relic that William got me the other day, and said I now own 45 of the relics. However, I completely forgot to show two others that were part of those 45, so I might as well get to them now. Take a look: 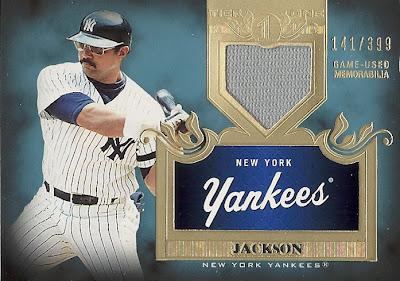 I'll do this one first, because I know if this guy was reading this he'd prefer to be first. Yes, this is indeed the Reggie Jackson relic. Sure, Reggie has been making some controversial comments lately, but what he did back in October of 1977 sealed the legend of Mr. October. I like Reggie, but his recent comments definitely were a bit overboard. I don't think he has the entitlement to determine who should or shouldn't be in the Hall of Fame, especially when he owns the All Time record for strikeouts. Nonetheless, cool card, and I'm glad "the straw that stirs the drink" is welcomed in the Tier One set. 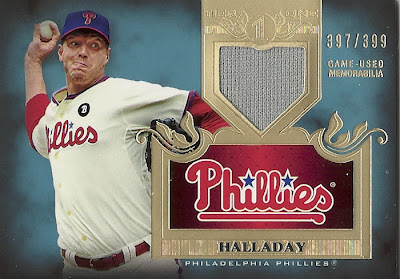 This guy on the other hand, plays entirely with his arm, not his mouth. Roy Halladay is a class act in every definition of the word, and although he's having a terrible year cluttered with injuries and mediocre performances, you can't bet against the guy coming back strong. He's had a heck of a career, but I'll always remember him for the postseason shows he's put on. Even though he couldn't top Chris Carpenter in the 1-0 shootout in the NLCS last year, that was easily the best pitchers dual I've witnessed. Maybe not quite Smoltz/Morris, but for me, it's #1. And who can forget his no hitter in the postseason? Only Don Larsen has done better. Unreal. Again, he is very deserving of being included in this set, and I'm glad I was able to knock him off as well.

Two great cards, adding to an incredible set. I made a big purchase tonight for one of the two big boys I needed, so, I'd say within the next few months, this set will be history (minus the two redemptions I'm waiting for Topps to ship out)! It's been a long, but fun ride. Thanks to everyone who contributed!