Hey everyone, Drew back here for now the 1000th time in the history of this blog! Before I get to what I promised in the title, I just wanted to say a few quick things. First and foremost, I want to thank each and every one of you out there who has taken some of their time out from their day to give this website a look! I grew up always being a numbers guy, and seeing some of the numbers of page views and followers and comments and what not is just astounding to me. While in the past year this blog has been wildly inconsistent (similar to AJ Burnett), it doesn't mean I'm losing my passion for the sports memorabilia hobby, it's just been that I've had a lot going on. These teenage years always offer a lot of excitement and memories and I don't want to spend those moments behind the screen of a computer the entire time. However, when I get a chance, I absolutely love to throw a post up about how my collection is coming along, as well as reading all of your blogs! You all have built me a certain amount of confidence that I can't thank you enough for. I feel like I have fans when I get on here, even though some times in my real world life it may not seem that way as much. So, not only do I do this for me, but I do this most definitely for all of you as well.

And it's about time I paid some of you back for all you've helped me through over the years! A while back, I promised to give away the contents of the Tri-Star OBAK football box I opened, and well, other plans got in the way. However, today, and for the next two weeks, you will all get an opportunity to win a piece of the break! I know my blog following is shifted much more towards baseball than football fans, however, some of these prizes are just too nice to pass up! I divided the contents of the box into five respective categories, each of which are fairly simple to enter. There are 3 autographs scattered within the groups they belong in, but the groups not containing autographs do have nice parallels and minis as well. So, without any further delay, I'll jump right into each group, one at a time, and I'll tell you how to enter for a chance to win the cards in the group! Let's Go!

GROUP B: Pioneers of the Game
For all of you history buffs out there, Tri-Star certainly hooked you up in this product! In it features so many cards of players/coaches/executives that don't often get much of a spotlight, although they may have had remarkable careers! In this lot of 23 cards plus a mini of the father of American football, you can not only take home some very nice cardboard but you can learn an awful lot about the game that you may not have known before. Since so many of these people were very smart, I would like to know, in order to win the lot below, what has been your smartest investment/purchase you have ever made (inside or outside of this hobby). 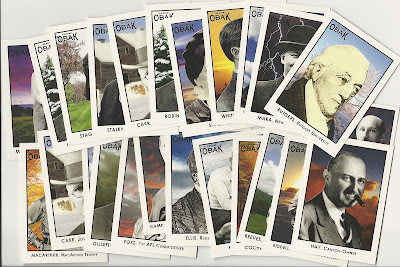 Group C: Award Winners
Alright, here's where things start to kick it up a notch! I'm not saying not to put in for the first two groups, because A) they're easy to join and B) I'd love to read your answers, and C) you could win! Anyways, in this lot of 22, you will find cards with recipients of awards such as the Heisman Trophy, the Maxwell Award, the Bear Bryant Award, and the Doak Walker award, all of which are prestigious college football awards! Bo Jackson is featured twice in this lot, as well as 2 great autographs of former Heisman Trophy winners Charlie Ward (numbered out of 50) and Andre Ware (numbered out of 75)! Both had great college careers and would be nice additions to any fans collection! In order to take home this solid lot, please leave me a comment sharing one of your favorite stories having to do with this hobby! It can be anything, just make sure it's longer than a sentence as this is one of the better lots in the contest! 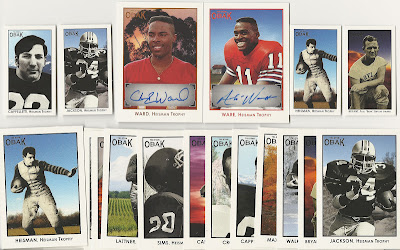 Group D: Legends of the Hall
Simply put, this lot is filled, and I mean filled with Hall of Famers- whether in the Pro Football Hall of Fame or the College Football Hall of Fame! How about 46 cards everyone, including an autograph numbered to 100 of Hall of Famer Jim Otto (famous for wearing #00), as well as 11 minis, one of which being a green parallel mini of legendary running back Earl Campbell, numbered only 23 of 25! For free? I would not pass this lot up if I were you guys, without a doubt. All you have to do to win this big chunk of cards is leave a comment stating one thing you love about the hobby today as well as one thing you hate about it. That's it. 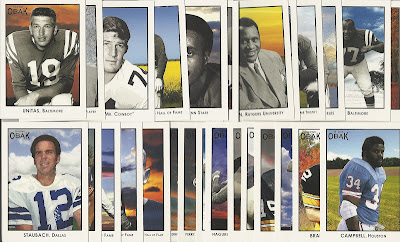 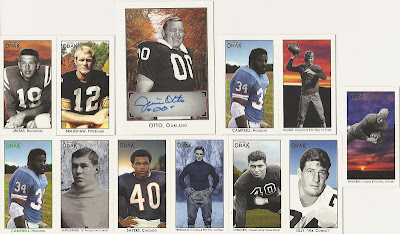 Group E: American Heroes/Best of the Rest
The final major group of cards you can take home is a bit of the miscellaneous stuff, but one big portion of this  43 card lot has to do with players who've been in the military during World War II and Vietnam, as well as 5 cards of former Presidents Reagan, Nixon, Kennedy, Ford, and Johnson (all of whom had a significant impact on the game at one point or another)! Besides those cards, you can find a green parallel of legendary kicker Morten Anderson numbered out of 25, and cards of many #1 Draft picks, NFL stars like Dante Hall, Kurt Warner, and Roger Craig, and many more! In order to take home this final lot, all you have to do is follow my blog and leave a comment saying that you did! 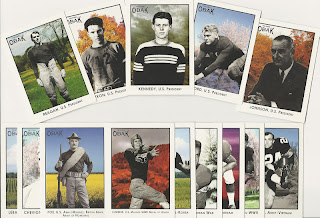 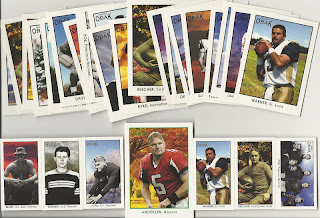 A few quick extra notes for you guys:
- If you plug the contest and advertise it on your own respective blog or site, and put it in with your contest submission, you will receive TWO additional entries to each group you put in for! So instead of getting the one chance for entering, you can have 3 chances to win each group! (Note: You must enter at least one group to gain the additional 2 entries)
- If 50 or more people enter this contest, I will throw everyone's name into a hat and whoever I pull will win the big pull of the box, a 1/1 cut autograph of Pro Football Hall of Fame head coach Hank Stram! This card can sell anywhere between $100 and $200 from what I've seen, so if you really want a chance to win it, plug this contest up! 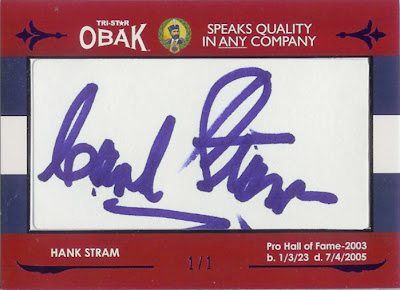 - If 75 or more people enter, I will do the same as I can do with the cut, and the winner will receive a mystery group of cards from my collection. You can bet that there will be some pretty nice stuff in there! I don't know if we can get this many entries, especially for a football contest, but keep in mind the more you plug this contest on your own blog the better chance you have to win some nice prizes!
Also, please put all of your entries in one comment, just to make things easier. So, this is my gift to you guys, and I really hope you take advantage of some of these prizes! I don't care what you do with them if you win, because you guys deserve every bit of this! Thank you once again to the good folks at Tri-Star for providing my blog the opportunity to review this product, and well, best of luck to every person who enters!
CONTEST CLOSES: SATURDAY, JULY 21ST AT 8:00 PM! DON'T MISS OUT!
Thank you for every moment, and here's to another thousand!
See Ya!
Posted by Drew at 6:07 PM