Hey guys, Drew back here! Yesterday was an incredible day in the life of a young collector from New York, as he managed to meet a Hall of Famer from his favorite team and get spoiled to no end all day long! Fortunately enough, that young collector happened to be me yesterday, as Dad, Schuyler, Connor, and I all made it out to a local card show run by the good guys at JP's Sports! This was the first time their company made the trip closeby to my house, and the turnout was ok for the most part. It wasn't a terrible showing, but it could've been a lot better. However, that didn't affect the 4 of us, as we still had 100 tables to look at and 3 autograph guests to meet! And, well, we still went crazy.

Dad and I's goal for the show was to knock off cards from the two big sets I've been working on. I didn't come with as much money as usual, because I was planning on saving up for next months even bigger show. But, we still made out really well, perhaps even better than all of the other shows! Take a look at the 1961 Topps and 2011 Topps Tier One cards we were able to take home this go round: 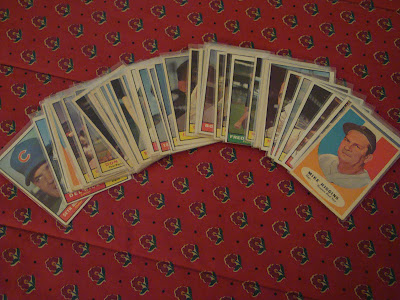 While most of the 61's Dad picked up didn't have a whole lot of flair, he figured we'd have to knock them off eventually, so he was able to pick up a grand total of 49 new cards for the set, putting us now at 49.2% of the way there! I didn't expect this many commons from Dad, so it made for an awesome surprise. Fortunately, for lucky spoiled Drew, we were just getting started. 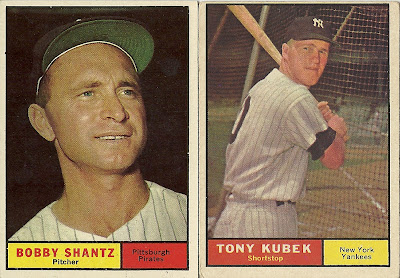 Three of the bigger 1961 pickups came from another vendor, the first two being of former Yankees Bobby Shantz and Tony Kubek! I swore I already had the Kubek but the wantlist said differently, so I'm glad he got it for me. Also, I absolutely love adding new cards of players I've met, so this Shantz pickup was pretty darn awesome! 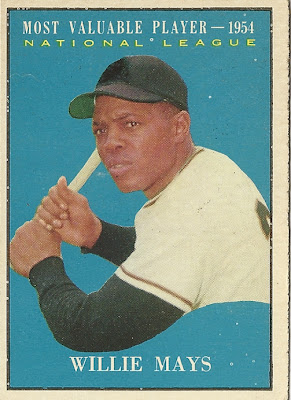 Easily the best card we picked up on the day was card #482, aka the MVP subset card of "The Say Hey Kid", Willie Mays! I'm pretty sure this set stretched from 1952 forward, to commemorate the first 10 years of Topps cards, but I don't remember offhand. It's not in tip top shape, but it's more than good enough to fit my set!
So, as I said, we are now .8% away from being halfway done with one of the most iconic sets in baseball card history! There's reason to be excited! Now, moving on to the more modern, yet still very nostalgic set, the Tier One relics. I bought 6 of these, but Dad ended up knocking off the 3 most expensive out of the group of cards below. He really is crazy, I'm telling you. 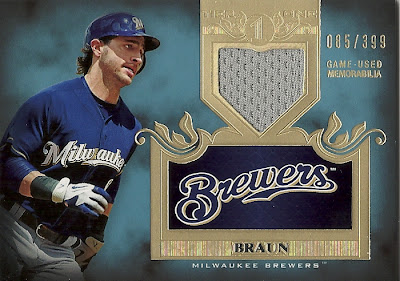 First I was able to add the "cheater", Ryan Braun. Who knows if he really cheated the game or not. I believe he did, because the reasoning for his innocence seemed a bit questionable to me. I still like the guy enough though, and he sure is fun to watch. 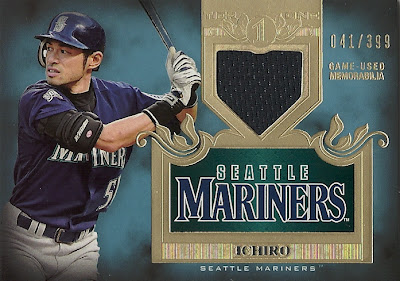 Speaking of exciting, how about perhaps the best hitter of this era, Ichiro Suzuki! Ichiro may not reach the 3,000 hit plateau in America, but his number of professional hits in total is incredible. He may not rake the way he used to, but that isn't diminishing the enormous legacy he's left on Major League Baseball. 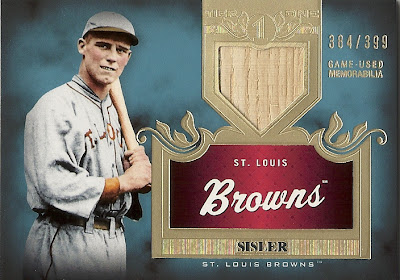 It seems difficult to not think of this guy when thinking of Ichiro, so it was fitting I was able to add this George Sisler relic as well. Sisler previously owned the record for single season hits, until Ichiro came along and shattered that record. However, he'll still be renowned as one of the best the game's seen. 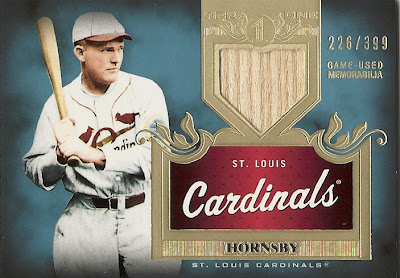 When it came to putting together a video game season, Rogers Hornsby could do what hardly anyone else could dream of accomplishing. Who can deny a guy with a .358 lifetime batting average? I find this one as one of the best of the lot, without question. 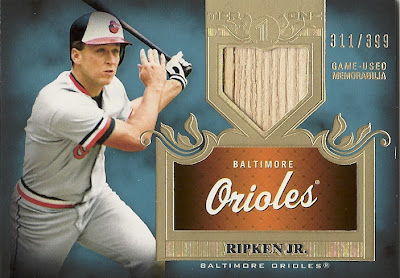 I'm pretty sure this guy Cal Ripken knew a thing or two about hitting the baseball too! With well over 3,000 hits, the Iron Man will easily be one of the most loved players ever. You have to love a guy that actually doesn't mind signing autographs for the fans. I would kill for some current players to be as classy as Mr. Ripken. 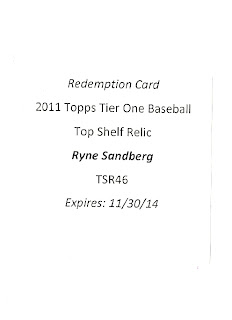 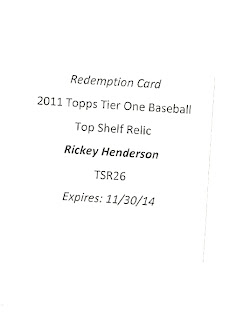 We also knocked off both of the redemptions from the set, Rickey Henderson and Ryne Sandberg! I've seen a few of the Sandberg cards on eBay before, but nothing of Rickey yet. I can't wait to see what these two look like when they're done and shipped out! 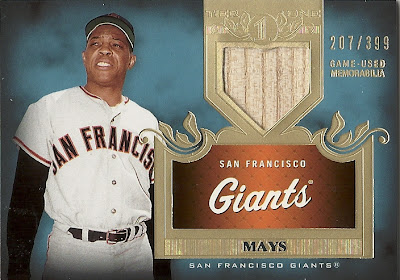 However, nothing will top these last two, at least in my eyes. It was a Willie Mays kind of day for us, as Dad picked up his relic from the set, which is easily one of my favorites in the set. I've said it before and I'll say it again, Mays was the best all around player in baseball history. From what I've read on him, it sounded like he could have had more than 5 tools if it were possible. 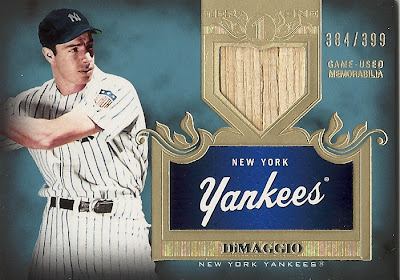 But I had to put this guy last, because as I recently read, he didn't like not getting the limelight. Mr. Joe DiMaggio, everyone! Boy do I love this card. DiMaggio is the second of the four huge Yankees on this checklist I've acquired, as I haven't gotten Ruth and Mantle yet. But, this will definitely have to do for now!

With these 9 new additions to the relic set, I am now 88% of the way there, just missing Bench, Wright, Beltran, Ruth, Mantle, and Aaron! I never expected this set to fly by so quickly, which is why I need to give my Dad more than just a thank you. You're the best dad, and I'm glad you realize how much I appreciate all you do for me. Also, thank you to my favorite vendors Rich & Hunter for being such a big help in selling so many of these to us!

We're just getting started everyone, so please stay tuned for even more new material within the next few days! See Ya
Posted by Drew at 10:04 PM